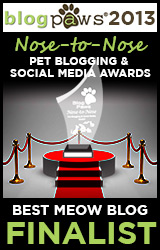 In spite of the sadness I still feel, today turned out to be a pretty freaking good day. First, the Woman actually checked my email and there was one from Skeezix's Food Lady telling me that I'm a finalist for the 2013 BlogPaws Nose-to-Nose Best Meow Blog!

Now, I'm up against mousebreath! which is like the most awesome thing out there for cats, so I'm not holding my breath, but doods, it still means I got nominated in the first place and now I'm in the finals!

I can't go to BlogPaws this year because of Stuffs (like, I don't leave the house) and the Woman can't go because she's already spending all her money on going to Vegas (plus she's kind of a loser), but if I win, other bloggers are gonna be there and I hope they clap for me.

Then later, the Man went to check the mail, and there was a big box for me and Buddah, and holy smokes, it was LOADED with presents! 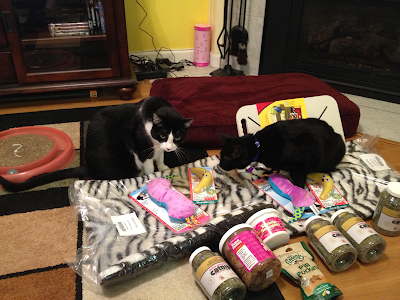 I mean, lookit all of this! A friend sent 2 zebra mats, toys for both of us, tuna flakes and shrimpy treats and about a years' worth of nip! We didn't even let the People get everything down on the floor before we were all over it. 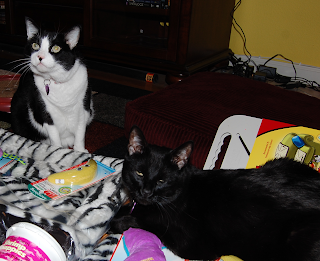 Actually, once the Man put the camera away, I started pawing at one of the nip bananas so the Woman opened that for me, and she gave Buddah one of the pink toys, but what he really wanted was to try the munchies.

There was a lot of gross noises coming from him while he scarfed down some shrimpy treats and tuna flakes and a Greenie treat...and doods, you might not believe this, but I wanted the banana more than I wanted to eat right then.

I totally love a good nip banana. I'll try the treats tonight. The Man did put some on a plate for me but Buddah ate it all. That's okay, I was a little too...happy...to even think about it.

To the friend who sent all this--and you know who you are!--thank you so much! It was like Christmas! And the tightwad Woman is all, nice, I don't have to buy toys or nip for a long time!

Wow, Max! Getting nominated is awesome...but getting all that cool stuff is even awesomer!

Congrats on your nomination. I'm not telling my cat, Pumpkin, about all the stuff you got, because she would be jealous of you.

WOW! What a haul you guys. You have a really awesome furiend.

Concats on the finalist. If it weren't for you, we wouldn't be blogging!

Congrads on the nomimation. If you win maybe someone will at least send you a video of people clapping for you.
What We wanna know is what did ya do to deserve the best gift box in the WORLD? By the way, Budda does look pretty stoned in that last pic.. Either he is zoinked on power nip or he needs to have his eyeballs checked cuz his eyeballs look like there gonna fall out & they aren't the same size anymore.
Must be really good stuff.
Glad you guy had a good day.

Awesome about your nomination and I am happy about your presents! I was not familiar with Eric and Flynn but I will try to send some kind of condolences to their staff! The Bridge is now full in my books cause so many have gone but you are still here and we are awesome loving you! Keep your gifted ways precious Max! Mighty Kitty saying night night and happy nipping!

Good luck! THat was a pawsome present!

Haha, he does look nipped! Good thing you have lots of goodies! MOL!

Pee Ess - Concatulations on your nomination!

Sue and the CatZ said...

Congratulations on your nomination! Hope you win - you are a real winner whether or no, though!
Sue and catz

Congrats on your awesome nom! I thought you and Mousebreath were related?

Concatulations on that dear Max! I'd love to hear you huff as I do. Thanks for coming to see me.

Presents are allus SPECTACULAR to get!

WOW! What a haul--you guys must be living right or sumfing. Woot!

And conga-rats on the great nomination for best Kitty Blog! We have loved you for a long long time--you were the furry first kitty blog we EVER found and you were our inspiration! We hope you totally WIN!