No April Foolin' this year...

Normally at this time on the 31st of March, I'd be uploading something for April Fools' Day, but doods, I don't feel like it. Sanjee is feeling poorly, so poorly that she thinks it's almost time to move on and it might be tomorrow. I don't feel like making a stupid joke when someone I've known almost since the beginning of my blogging, someone so sweet and beautiful, is getting ready to make her way to the Bridge.

That's selfish, I know. She's had a very hard time of it lately and when she gets to the Bridge she's going to have nothing but Awesome...but I'm going to miss her. I'm going to miss knowing she's still here with us. Someday I'll see her again and I hope she'll be happy to see me and will grace me with a headbutt, but right now...I'm going to be selfish and feel bad.

If you haven't yet, maybe pop over and give her some mojo?
Okay. Just so you don't think my people are actually tidy or anything. This is the room that they actually use. There's clutter all over the place, though you can't see a lot of it. 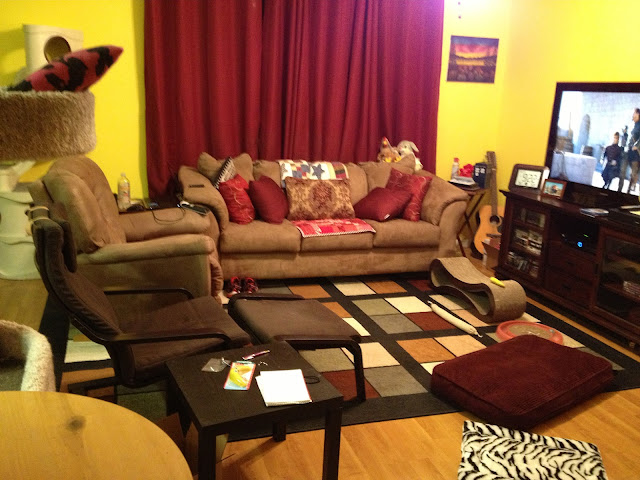 It's comfortable, though, and we like it. You don't have to be careful in here; if you spill something or hork up a hairball, no one really cares. It's like, okay, it'll get cleaned up. So Buddah can scratch his funky scratchy toy and get pieces of it all over the place, and no one gets bent. I get fur all over the carpet or any of the chairs, no one cares. Eventually it all gets vacuumed up. But it can be a mess sometimes...things die in here. Like hopes and dreams. And bugs.

Tomorrow the people are going to Vegas because the Younger Human is turning 30 and apparently that means taking him someplace where there are a lot of people to mock him for it. And they're going to shove him out of an airplane. If he survives, he gets to go to a people circus. I'm not sure, but there's a 50-50 chance they've sold him to the circus...I hope not, because if they do that means That Damned Dog Butters will probably come live here.

In our house "getting the Grandma" was the same as saying "getting royally spoiled".

Wow... you get Grandma. I hope the younger human survives getting tossed out of an airplane. I mean that sounds a little rude--is that like bird parents do to their kids. Do your humans know they don't have wings? I mean really...

Um, that room looks about 200% tider than any room in my human's house!

(Note that when it is anything negative, it is HER house, but anything positive, it is MY house!)

Wow, I see a guitar in there. Do you get music to go along with your singing? (And yes, it looks a lot better than my house too)

We're very sad about Sanjee. But I hope your people have a great time in Vegas. Mom and Dad jumped out of an airplane last year on their anniversary. They had so much fun they are doing it again.
--Jasper

Max, Our whole lives revolve around our cats so the only kind of place we would live in and the only kind of furniture we own is made for fur, hairballs, cat toys, claws, litter, and random bits of things cats have destroyed. I don't understand people who get a pet and then immediately banish them from the couch.

Where did your people get your rug? I want one to cover up the spot on the carpet that has a mysterious hold developing in it (yeah, I know, I live with 4 cats so probably it isn't that mysterious).

The rug was purchased at Lowe's (like a Home Depot or Menard's if you don't have one near you.) It was even fairly inexpensive...

Where did you get that awesome brown chair, and foot stool? I think my husband could actually sit on that without his back hurting.

That's from IKEA. We got it thinking it would help my back, but it would up hurting even more. The light brown recliner next to it would up being what my back needed...

Looks pretty neat to me .... only cat toys and people comforts and neither is "clutter" in my book.

"Getting the Grandma" means "let the good times roll!" Have fun, Max!

We are so sorry that Sanjee has made her final journey...purrs to all of those who are missing her.

There have been too many kitties goin over the Bridge lately. We are missing each and every one.

But we kinna set up our annual April Foolies joke days ago, and funnies are important too. So we left ours up. We unnerstand both ideas.

So we are leaving the joy of life up, and visiting the Bridge-goers famblies at the same time. Life is full of contriaditians

Enjoy the Gramma. Life would be an unending circus if DDB came to live with you so we hope Younger Human survives!
Every home needs at least one room that is lived in. This is the one with the hot air blower thingy isn't it?

Oh yeah...the fireplace thingy is in the room we all like to live in. It hasn't been on a over a week, though. That bites.