And the winner is...

Congrats, you will get a copy of Max Attacks! As soon as I have your mailing address (I gotta figure out how to get your email from your comment, which I used to know how to do but suddenly feel brain dead) I'll drop you a ling and get it, and I'll pass it along to the author's rep!

Dive into Wick's World for free, limited time only 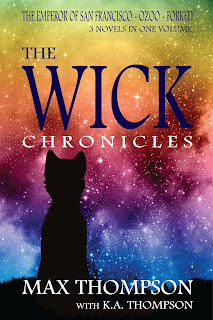 Still...if you haven't had the chance to read The Wick Chronicles, here's your chance to get started FOR FREE.

This digital edition is the first three books--The Emperor of San Francisco, Ozoo, and Forked--and you can download it for free, for the rest of today (maybe a little into tomorrow; I don't know when on the 19th that the link expires, but it does expire on July 19, 2019.)

And with this offer, we've officially launched the website for The Wick Chronicles, where we'll be offering free content every now and then. A new Wick short is coming soon, with several more to follow...so if you've already read the other books in Wick's universe, those will be more for you.

To get your free digital edition of The Wick Chronicles, just CLICK RIGHT HERE. 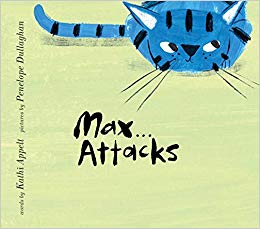 A while back I was sent an advanced reader copy of this book, Max Attacks, written by Kathi Appelt and illustrated by Penelope Dullaghan. It's cute and fun and funny, and you can totally win a copy!

It's aimed at kids in the 4-8 age group, but it really is sweet and you'll want to read it anyway. This Max is a lot like me when I was younger--he'll attack anything. Happily. And anyone who has ever had a cat will totally get it and enjoy the perspective of this book.

It's told in fun prose and the pictures are outstanding, and if you have small kids or grandkids, it will make story time a ton of fun.

Here's how it'll work: leave a comment on this post, and it must have an email address associated with it where I can contact you if you win. No anonymous entries. I'll use a random generator (your number will the order in which your comment appears, absent any anonymous comments) and on Sunday, July 21, at around 8pm Pacific time, I'll pull the winner.

If you follow me on Facebook (and you can, via Twitter, right there in the right sidebar here --> ) you already know that not long after turning eighteen, I got sick.

Again, I got it from Buddah. Just like I did when he first came to live with us. He got sick, got over it in a couple days, and then I got it...but I did not get over it was easily.

In the grand scheme of things, it wasn't horrible. Nausea, not eating, and a royal case of the squirts. If I were much younger, I don't think the people would have worried even a quarter as much as they did. But I'm an old guy, with failing kidneys, and a product of the nausea was not drinking enough and not peeing enough, so Monday I was dragged to the stabby place where I was--surprise--stabbed a couple times.

They stole blood and then pumped me full of water. That was a concession; because of my health history the stabby lady kind of wanted to hospitalize me and put me on an IV, but the Woman straight up told her doing that would literally kill me, so no. That's when they discussed medications and the fluids, and then sent me home to wallow in my extreme upset at having been manhandled.

On the plus side, when Buddah went the stabby lady stuck her finger up his asterisk in an attempt, I think, to find a brain cell or two. She reported that she didn't find anything. I was not surprised.

The drugs and the fluids worked. I started eating and drinking and peeing, and the world celebrated when I had a good poop (really, if you're not on Facebook, you're missing things like this. I POOPED.)

Today I was reminded that I'm all right, because my whims were not catered to the moment I made them, and uneaten food was not immediately replaced with something I might like better. I was even made to wait an hour between requesting lunch and getting it!

So, the people are relieved, but unsettled, because I am 18 and things can go downhill pretty quick at this age. I mean, it did take me several days longer than it took Buddah to recover. The Woman says I've always been that way, but she said it like she hoped that was the only reason and not that it'll be a future pattern.

Eh. I am a delicate flower. I'm fine with that.

So. I'm okay. And working. We're getting close to releasing the first Wick short, and it'll be free. We're also looking for ways to distribute the first Wick book for free without risking major pirating of the manuscript, all while making it easy for people to get. So if you haven't read it, pretty soon you can and it won't cost you a dime.