OMG THE PEOPLE WENT OUT AND THEY WENT TO DENNY'S
AND THEY GOT TO MEET DIVA KITTY AND THE FLUFFIES
AND THEY DIDN'T TAKE ME!!!

I coulda met Sophia!
I BEEN ROBBED!

Plus, Denny didn't send ANYTHING home for me.

I dunno what I was expecting when the Woman came back from walking for boobies, but this limping lump of do-nothing wasn't it. Doods, she's, like, just THERE and not doing anything.

Well, she's barking. Seriously. She sits there and barks.

I'm not sure, but I think she might have licked a dog while she was walking and caught dog-cooties. This is making it very difficult for me to want to sit on her and purr, just in case her brains have turned into woofie-mush and she tries to lick me and pass the cooties along. I'll risk a few people cooties, but I have my limits.

He owes her, too. She was sitting here minding her own business, and he head-butted her ouchie foot, right where it hurts the most.

It must have been one hell of an Ouch Moment, because she went to her stabby guy and he's sending her to see a stabby guy who does nothing but look at feet all day. She's not happy, but that's what she gets for not practicing her walking enough. Clearly, she needed more...
Posted by Max at 10/29/2011 03:03:00 PM 13 comments:

And for for my blogoversary, I think I'm gonna admit I missed the Woman when she was off walking for the boobies in Atlanta. 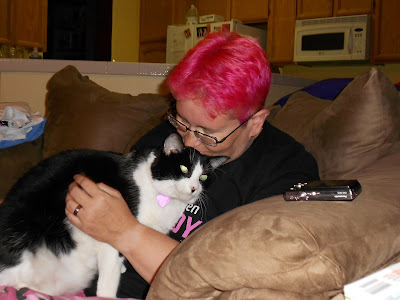 But only a little bit.

And I might have wandered around the house, meowing as I looked for her. But only because I knew the Man would tell her and she would get warm fuzzies thinking she's important or something. It's important to make a person feel needed every now and then. That makes them give you extra crunchies when they get home. 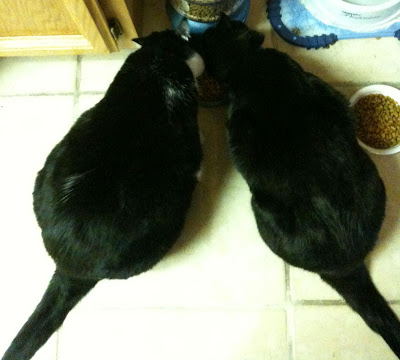 Holy carp doods. You know the Woman has brown hair, right? Well, brown with a whole lotta gray in it. I think something scared the holy carpola out of her the other day, because I went to take a nap and when I woke up, her hair was damn near white. 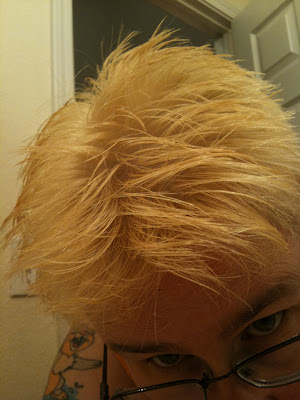 A really good fright is about all I have to explain that. But don't ask me how THIS can happen: 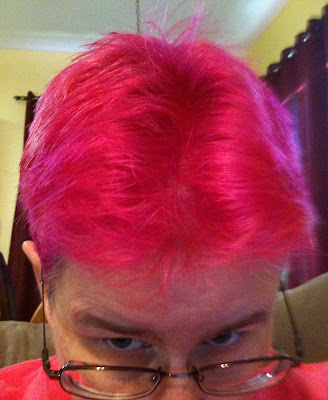 Tomorrow at Ohmygawd O'clock she and Diva Kitty's Mom are getting on a plane and going to Atlanta to meet up with Jeter's Mom and a buncha other people for another boobie walk. But it's ok, because the Man is staying home to open cans for us, and in the end, that's the important thing.

See? See the things I have to put up with?

AAaahhhahahahahahahaha...I usually sing at 3:15 in the morning which the Woman really loves, but last night she asked me very nicely to not sing so that she could sleep through the whole night, and being the considerate cat that I am, I obliged.

I mean, I can contain the music for one night.

But right about the time I usually start singing, Buddah decided to play a solo game of Thundering Herd of Elephants, and after running up and down the hall a few times he sprinted into the bedroom, leaped up on the bed, and head-butted her smack in the face really hard, then turned around and bolted back out.

She was all WTF just happened? and I think she would have been happier if I had sung her awake.

Ha. The Woman woke up a little after 4 this morning thinking we were having an earthquake, and she was all ready to bolt out of the bed and go hide like the inner 5 year old she can be sometimes, when she realized it was just me, taking a bath while on her bed, pretty close to her pillow.

She seemed annoyed, but what was I supposed to do? Not bathe?

Now she's blaming me because she couldn't get back to sleep, but hey, I'm not the one who over reacted in the first place, right?

Besides, if it hadn't been so freaking cold in the house I might have been lounging somewhere else instead of trying to steal her warms while she slept.

So it's her fault for not turning the warm air blowing thingy up higher.

Ok, that kitty is never gonna land. So i changed the channel, and doods...make sure your people see this and understand that this is a lesson to them. If you tick the kitty off, the kitty WILL GET REVENGE!

Doods, I've been watching this for like eleventy hours, and this poor guy still hasn't landed. 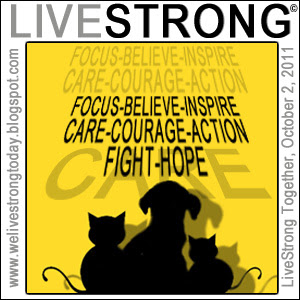 Not to equate him to a human, but what took my dog, Hank, in the end, was cancer. Or they think it was; because of his age and overall health it was kinder to not cut him open and peek, but the stabby person felt a huge mass on his spleen. So he wound up having to go to the Bridge before we were ready for it.

The Woman's Dad had kidney cancer; he lost one of his kidneys to it, but it didn't kill him. he lived for a good ten years after.

The Woman's Mom had lymphoma. It didn't kill her, either. She was lucky, she got good treatment and beat that sucker down.

The Woman had a friend, Anne, who got breast cancer and beat it. But then it came back, and she couldn't kick its ass a second time. She and the Woman shared a birthday, even though it was a few years apart, but now every year on her birthday, the Woman thinks a lot about the friend she lost.

Edsel's mom had brain cancer, and we all know how that ended, and I'm still smarting over it. 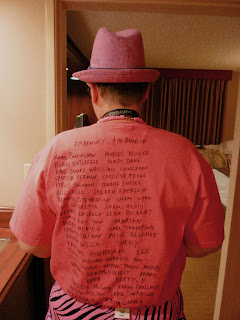 Look at that shirt and all the names that are on it. They all had breast cancer. Some survived, some did not.

But it's too many names. After the Woman wrote all those names on the shirt, she had to sit back and take lots of deep breaths because it all just slapped her in the face.

I've said it before, and I'll say it again.

I can't go out and walk to raise money to fight cancer, but I can Livestrong today, and remember the people and friends (and Hank) who have had to fight for their lives because of it.

Dang...almost a whole week without posting... What I've been up to this week: