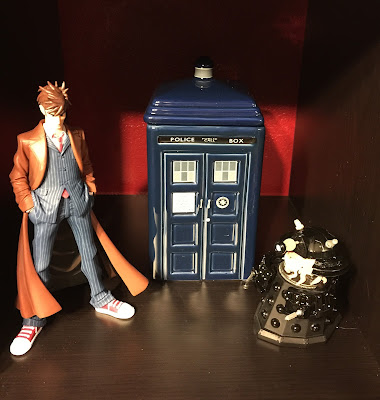 The Woman ordered it a couple of weeks ago, and said it was for me, but I won't actually get it for a long, long time. Until then, I just get to look at it nestled among some of her Doctor Who toys.

Oh yeah...she has a lot of those now.

She also has several plastic TARDISes, but this one is ceramic. And some day--she says not for a long, long time if she gets her way--it's where my remains will rest while I go off onto the next great adventure.

She said she felt a little creepy buying it, but she wanted to get it while it was still available.

In the meantime, I get to enjoy it while I lounge on the desk during work hours. And there's been a lot of those lately. Sometimes 12-14 hours a day.

(Not complaining...we're having fun. Maybe too much fun, because when we get to the final draft of this book, a bunch of stuff will have to be cut because there are some adultish things that need to be toned down.)

((OTOH, there might have to be an R rated version, because honestly? Bouncy things through a cat's eyes is...interesting. And funny.))


I'm also trying to talk the Woman into buying a 2nd ceramic TARDIS because doods...it could hold a TON of crunchy treats.

♦ The Woman put pants on today and went outside--I know, right? PANTS!--and when she came back she had a plastic bag in her hand, so I asked her of she bought me anything. Doods, she totally did! She bought me a bag of Fancy Feast dry food, because that's what goes into the treat machine. And I didn't even have to work for it; she put some in the machine but then also dropped a handful down onto the plastic base so that I could just eat a bunch.

♦ I learned this week that the Woman has a friend named Honkers McBonkers. And it really doesn't surprise me.

♦ I still have not see a printed copy of the hard back version of my book. The printer is supposed to send me a proof copy, but every time I check it's still "in printing" so I ordered one off Amazon and it'll be here Monday. Go figure. You guys might see it before I do.

I guess I should have warned people.

You also might go out and adopt a kitten just to name it Wick.

You also might notice--especially if you're friends with the Woman on Facebook--that we used a few names of people she knows.

And the whole royal family was named for a super cool dood named Jeff, but the Woman probably should have told him that before the book went to print, because what if it pissed him off?

And Wick...well, his name came from one of the sweetest people the Woman has ever met.

♦ I don't know if we'll do the same thing in the next book, unless you have a burning desire to have someone kinda douchey named after you.

♦ The Woman's birthday is next week and the Man is not going to go pass gas, so I don't know how much writing we'll get done. It sounds like they want to go places and do things WITHOUT ME so who knows?

♦ I was going to take a picture of the spiffy new office spot I have, but someone needs to clean some crap off the desk first.

♦  Instead, here's a picture of me looking down on everyone. Well, not YOU. You're awesome. 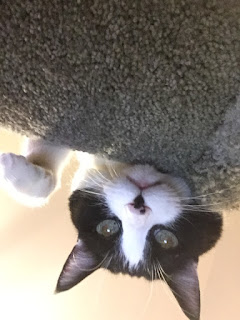 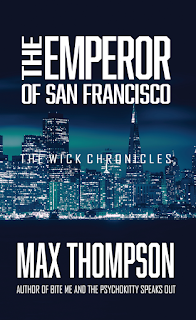 In fact, I wish I had my fun bits, so I could spawn, and I would name him Wick, so that Wick could continue on. But I don't, so there will just have to be more Wick books. Next one is pretty much outlined to the end (except a few parts) and the vomit draft is half done. Oh yeah, I have found my calling, and it is Wick.
Posted by Max at 8/17/2016 04:34:00 PM 9 comments:
Newer Posts Older Posts Home
Subscribe to: Posts (Atom)