And Now, A Moment of Buddah... 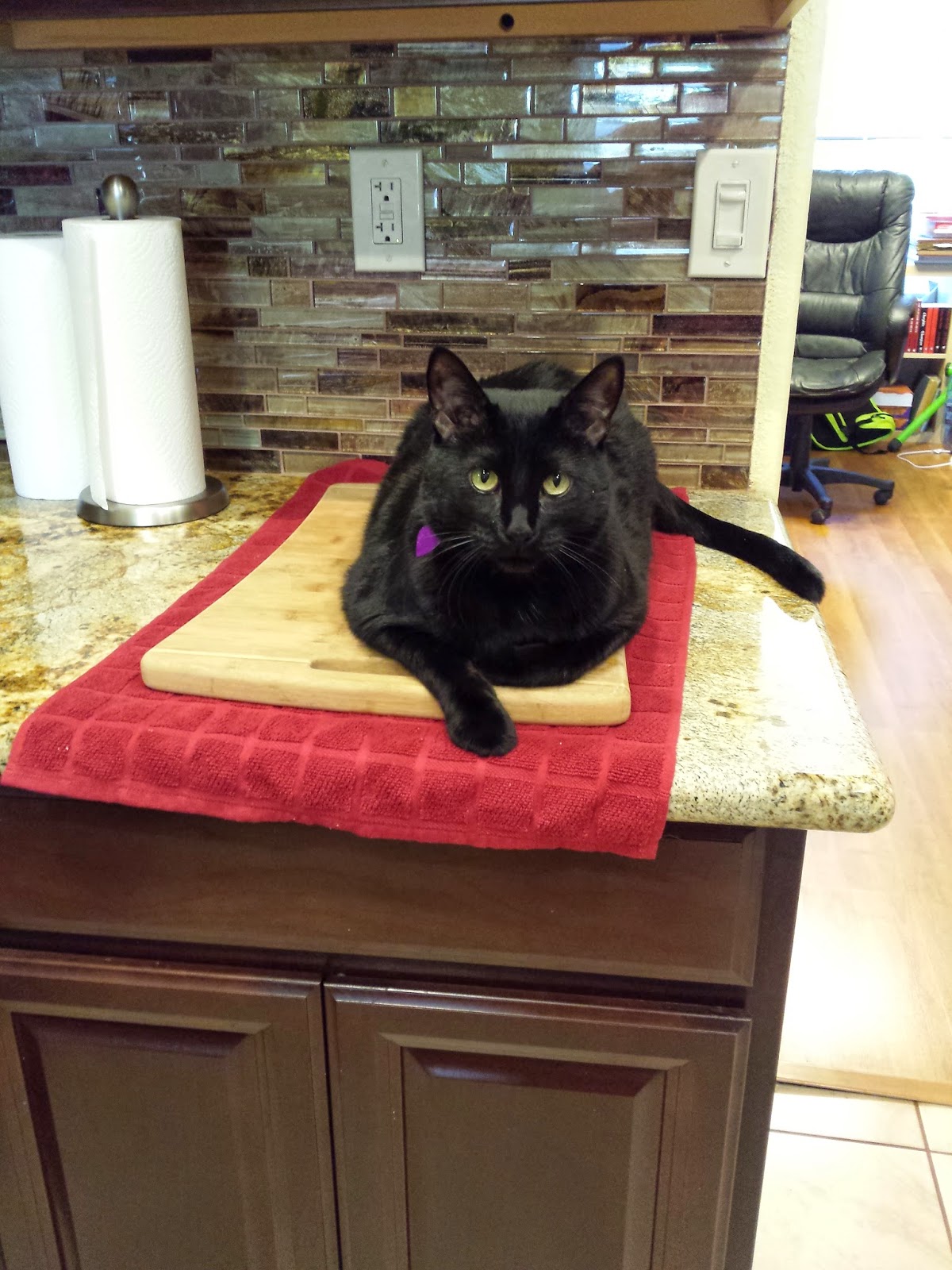 Oh! Oh! Oh! It's me, BUDDAH! Max says that since my own blog just gathers dust and people seem to like me and want to hear from me that every now and then he's going to let me pot of his blog and also because he's getting old he worries that when he goes to the Bridge it will just sit here and rot so I have to prove that I am worthy of the Psychokitty blog but the he said not to look forward to it too much because even though he's old he still plans on being here for a good 5 years and maybe more but that's okay because I just want to write something every once in a while.

I'm kind of surprised he picked now to let me write because last night after we had dinner we started to play a game of Thundering Herd of Elephants and I kind of forgot we were playing and I grabbed him with my mighty teeth and dropped him to the floor and then he started growling and we started bunny-kicking and he growled louder and the Dad stomped down the hall and the Mom threw a box of tissues so that it would hit the floor right by me but not on me to make me let go, and then Max ran away and I sat there with a mouthful of Max fur but no one got in trouble because Max started the game and he wasn't hurt, just upset, and I didn't gag on his fur even though I had a lot of it stuck to my tongue.

After that he went to hide in his nook by the fireplace which is now hidden mostly by the little Doctor Who Christmas tree which might be his favorite thing ever and I went to lay under the big Christmas tree in the other room which will be my favorite thing once someone puts down the soft velvety blanket thingy that goes under it.

Just ordered 50 copies of the book

All righty. We got the proof copy of the book while the Woman was off boobie walking, and it looked good, so she gave the distributor the thumbs up on it, and it'll start popping up in online books stores.

BUT...it's $11.95 unless it goes on sale and even then it'll be over $10. And for a short book, I think that's too much, but that's what it worked out to. So we ordered 50 copies that should be here in plenty of time for giving as gifts (if you're in the U.S.) and we can price it way lower, so if you want a physical copy of it and not the digital, order it from me.


Non-U.S. orders are $8.50 US plus $3.00 for shipping. That seemed to be the easiest way to account for the extra costs in shipping. Just use the drop down menu in the Paypal link above to see the International option.

Bonus: I'll pawtograph copies you get from me.

Now, of you read on a tablet and have a Kindle app AND an Amazon Prime membership, you can read it for free. For reals! I highly recommend you get it this way. I still get paid a little bit per borrow and it's a really short book, so you might as well get it for free.

All right, so the Man was the one to feed us this morning, while the Woman stayed in bed snort-snoring and drooling on her pillow. I ate, had some water, hit the litter box, and then went into the bedroom and crawled under the bed, as I do most mornings because it's a spiffy napping spot.

As I do every morning, once I was under the bed I meowed a few times, because it's polite to announce your presence.

So I meowed and then heard the Woman grumble, "Yeah, I didn't miss that at all, furball."

I WAS BEING POLITE! I let her know where I was so that when she finally rolled her asterisk out of bed she wouldn't be all Where's Max? Where's the kitty? as she lumbered up and down the hallway, slapping those giant feet on the fake wood floor, worried that I somehow got out or someone broke in and catnapped me.

I was thinking of her, and that's what I get. "I didn't miss that at all, furball."

And she wonders why I did't act 52 kinds of happy to see her when she got home yesterday.

I'll be right here until Monday... 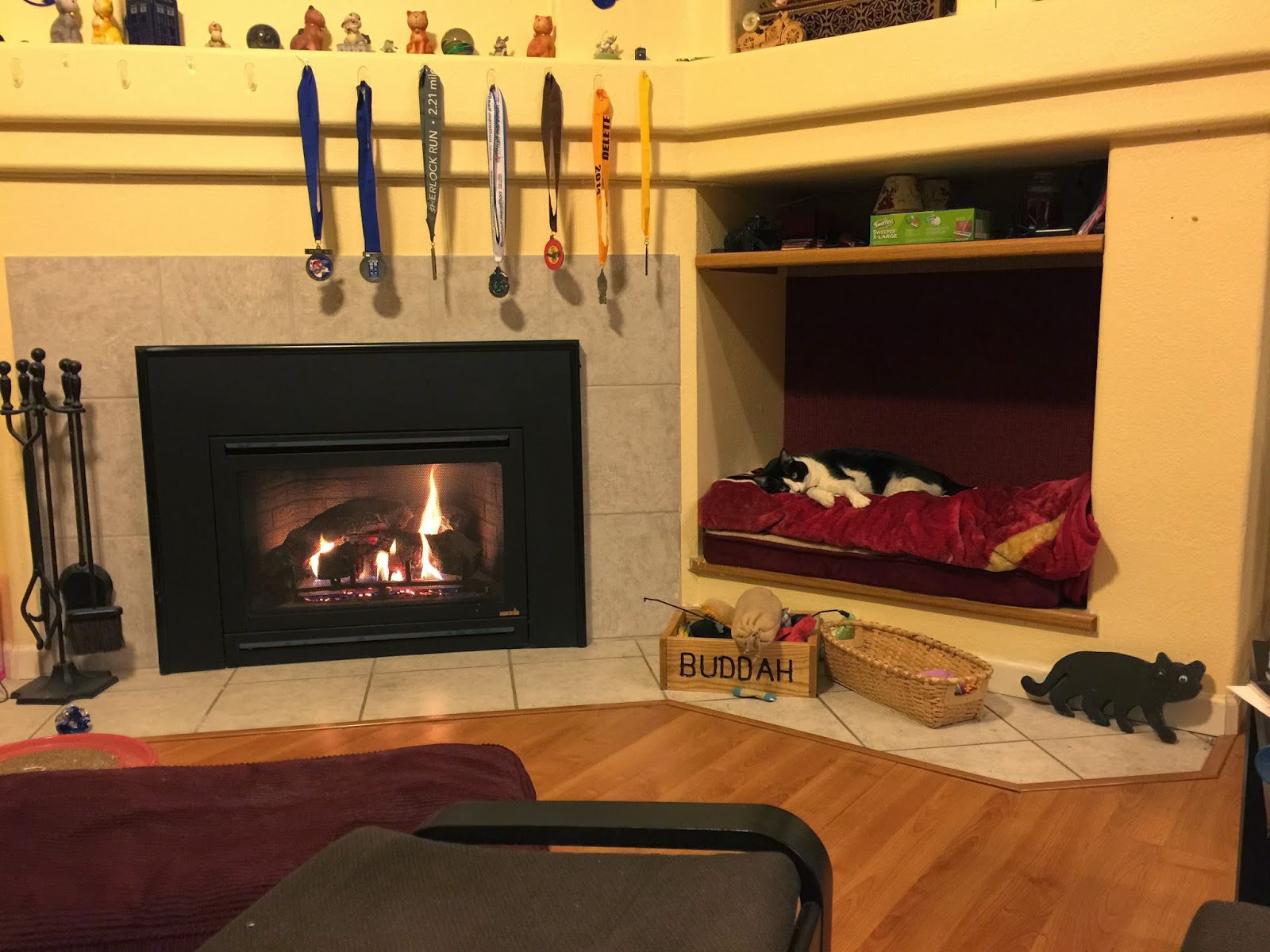 The Woman is leaving tomorrow morning to go meet up with DKM and the rest of their team to walk for boobies, so I figured this spot right by the fire is a good place to wait. If the Man sits out here and watches TV, maybe he'll let me get online to see if she posts any pictures on Facebook, but I won't be able to blog or anything until she's back.

And that's all right. It's all for the boobies.

Oh! And look what the Man got yesterday. 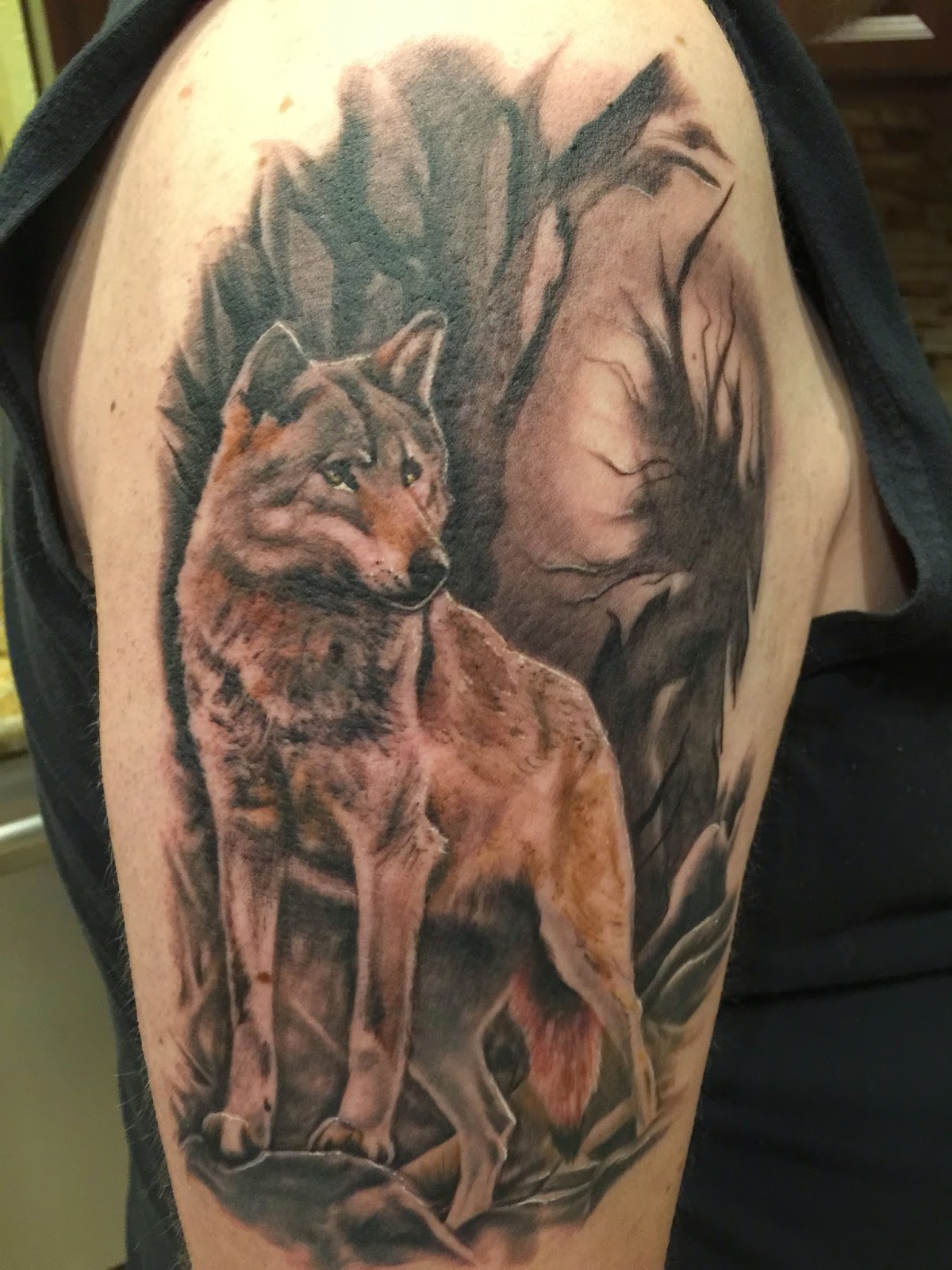 Even he's getting tattoos that aren't of me!

It's pretty cool, though, and he didn't even cry.

See ya guys next week! My Ask Max Monday column will be a little late, but don't let that stop you from asking questions! You can leave them in the comments on this week's column, or email me at askmaxmonday@gmail.com.
Posted by Max at 11/19/2014 08:13:00 PM 10 comments:

Because Amazon is freaking fast... 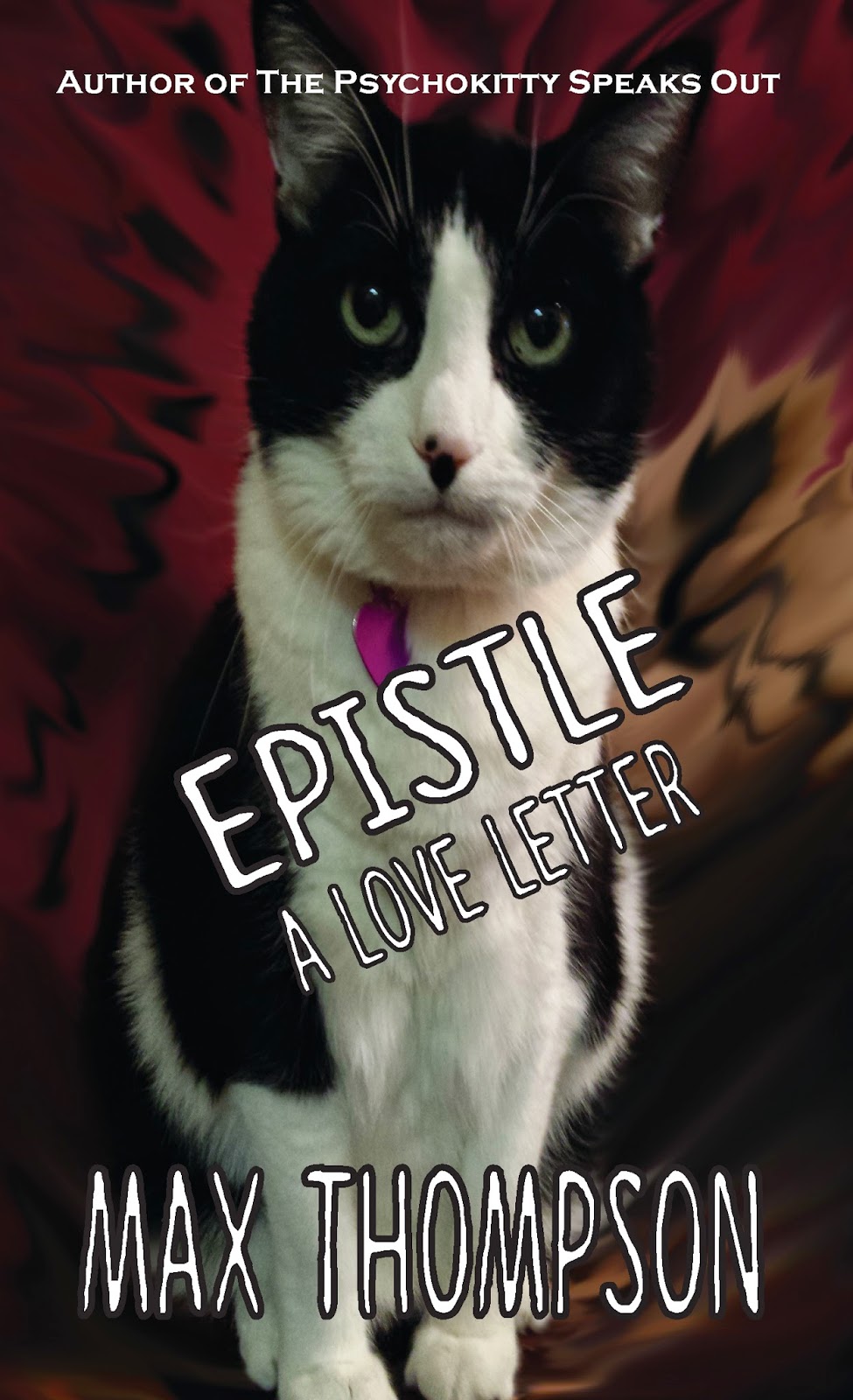 The print version probably won't be available for at least a week, maybe two; we still have to see a proof copy and then approve it before it even goes into the distribution channels...but if you read books digitally, Amazon has it.

We haven't actually seen the digital version yet because it went live so fast, so hopefully there are no bugs to work out.

The only real hiccup is that there is no cover yet. Well, nor a title. It's had a working title from the very start, but it no longer fits the book.

That'll all come together over the weekend, I think.

In any case, 90% of it is done, it's just the particulars to be dealt with...and it should be available in plenty of time for Christmas.

Now, one thing I ask you guys about before was if you wanted Buddah to write a chapter...and we started out thinking it would work and it would be funny, but it honestly did not fit the format of the book, so in lieu of that he wrote the forward. I've never had a forward before, I don't think. I hope you guys like it, because he's 12 kinds of excited about it.

This is why Doctor Who calls people "Pudding Brains" now...

STAY ON THE FREAKING BIKE AND TURN IT AROUND!

You can't run faster than an elephant but that rumbly bike probably can. 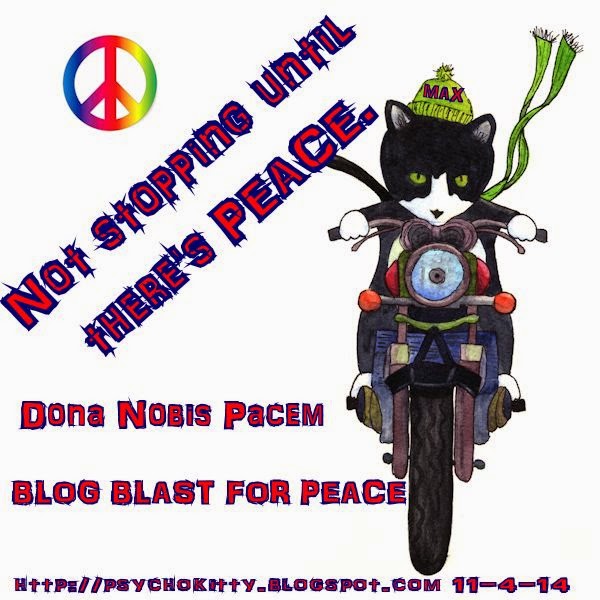