It's Time for Santa, Guys! 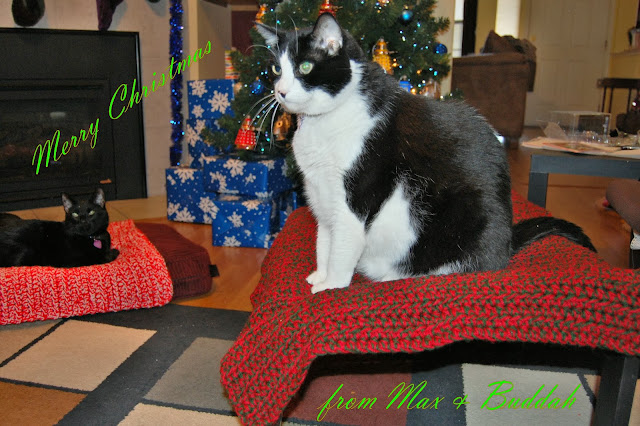 Doods, I totally did not expect to get mail today but I got a BIG box, and on it was a return address that said,

and it was for me and Buddah! I inspected it pretty closely before it got opened and I could already tell there was some stellar stuff inside.

I mean, look all all this!

There were crunchy treats--TEMPTATIONS!--and toys and a nip banana and a scracther, and this little red sproingy toy that Buddah went nuts over, and even a mug for the Woman!

(Ok she took it whether it was for her or not. Because IT IS AWESOME and she thinks it's too nice for me or for Buddah.)

See? it is pretty spiffy.

We took too many pictures to show here, so if you want to see us get our presents from Allie, Ellie, and Raz from Friends Furever, go peek at the whole set of pictures on our Flickr thingy. 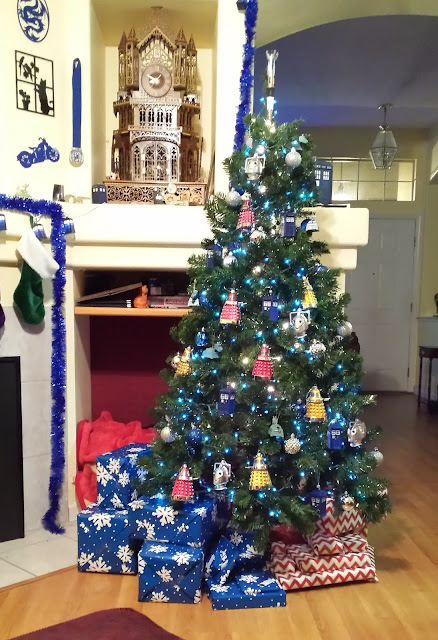 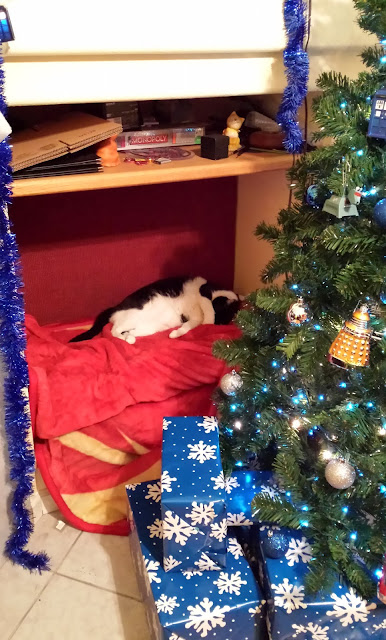 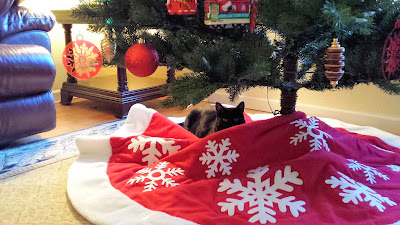 NOTHING. She got me a big fat NOTHING.

On the other hand, she bought a couple somethings for That Damned Dog Butters. But ya know, I'm so used to it now that I didn't even bother registering a complaint. I just plopped down on the floor, hitched my back leg up, and licked myself.

I'm just gonna be 6 kinds of chill, and wait for Santa to bring me that real live fresh dead shrimp.

I'm not even gonna go poop on anyone's pillow.

That's how I roll.

Okay, so today the people put pants on--REAL PANTS--and left the house, saying they were going shopping for toys.

The people don't play with toys.

So clearly, they were buying cat toys. I am a cat; I occasionally hunt the toys in the house to kill them.

When they go shopping they're usually gone for a long time, so I went into the room with the big comfy bed and jumped up there to take a long nap, and I admit, I was a little excited. New toys! It's been a while since I've had a toy I wanted to kill, so that was something to look forward to.

But then they came home, and what did they have?

A whole lot of nothing.

They walked in empty handed.

At first I thought they'd just struck out and couldn't find anything Max-worthy, but then the Woman left her phone where I could see it and LOOK AT THIS

There are a lot of toys there but not one damned cat toy.

So when the Woman sat down I jumped in her lap and was going to tell her exactly what I thought about it but then she went and said, "Lots of toys, right, Big Guy? And you bought most of them."

Well dammit, now I can't even be mad.

Not even a tiny bit.

And really, doods, you bought these toys: it took 2 trips, filling up the back of the HHR both times. I save most of my money from my books every year to buy things for Toys for Tots at Christmas and some random cat thingies for cats that need cat thingies, but this is the Toys Haul.

When you bought copies of my books, you were also buying toys for sticky people who might not get much for the holidays.

It would have been nice if they'd SAID this is what they were doing instead of getting me all excited about waking up to a new thing to kill, but it's cool. Now I feel all warm and tingly, and it's not much longer until Christmas, and Santa will hook me up. The Woman assures me that she made sure he knows I would like a new nip banana and some real live fresh dead shrimp, and that's all I really want or need.

Thanks, guys. I don't always get a real feel for how many books I sell or where the money goes, but seeing this?

Now, pet my head and tell me I'm pretty. I feel pretty tonight.

I'm just surprised he still sorta fits in that 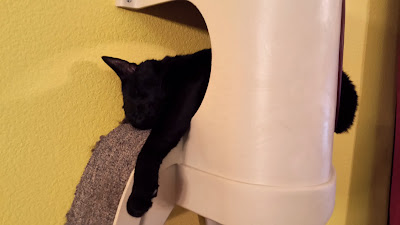 Then he was all 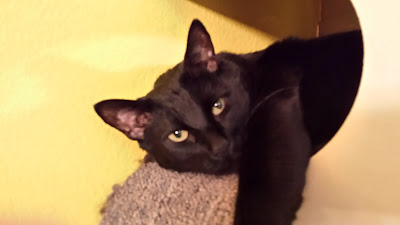 I know those feels, little dood...

So why won't the Woman PUT SOME PANTS ON???

Seriously...aside from the eye bleach I'm hoping Santa brings me, instead if pant she wears these slippery shorts that fit like skin, and that makes it very unpleasant for me to sit on her lap.

She should wear pants.