I am not in Washington...

...but apparently the Tacoma library thinks I am, and keeps emailing me about an overdue book. I even emailed them back to let them know they had the wrong person, but still they send emails.This really sucks because now if I ever go to Tacoma, I won't be able to check any books out of the library there. 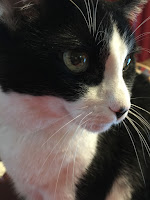 In unrelated news, the Woman has been making sure she posts on her blog every day this month. No one's reading them because it's a lot of nothing to talk about things, but that's not the point. She's doing it and getting back into the habit of blogging. So I was thinking I'd try that in February.

I might even try to make 2-3 of them worth reading.

And not all about writing!

Seriously, doods. This is the view I have today: 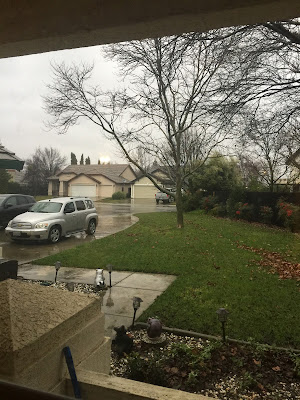 It doesn't show the wind, which is 4 kinds of loud and is making everyone unhappy. But it got the Woman to turn the fireplace on in case we lose power, so we have heat, and I'm just going to curl up in front of it and enjoy it. 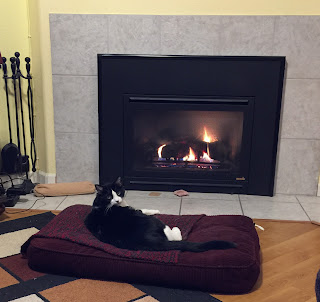 Hopefully we keep power AND the fireplace on...and that the trees outside don't uproot and squish the house. They'd be more likely to squish a car, but I don't care about that. The cars aren't mine; the house is.

We got a box of hardback copies of Ozoo -- 20 in total -- so I can pawtograph them for people who are collecting my spiffy signature. We'd hoped to have them in time for Christmas but that didn't pan out, and then when we did get them things were hectic around here...but, I got 'em ready for anyone who wants one.

The paperback will be available soon...I probably said that before but now I totally mean it! Just waiting on some tweaks that need to be done to the metadata before it can go into distribution.

How I'm spending my days... 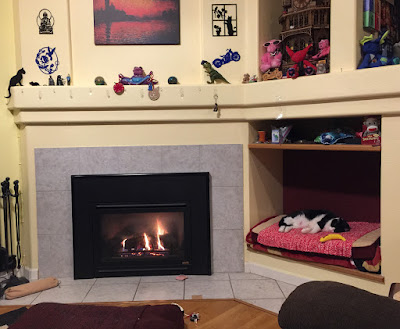 It's been really rainy here, and rain means cold even if it's not really cold, so I've managed to talk the Woman into turning the fireplace on in the evening. After I have dinner, I bake in front of the fire for a while, then climb into my cubby to nap. Even tonight, when the Woman said it wasn't cold enough for a fire, I asked nicely and she finally said okay. She was warm enough but decided she could take her pants off and let me have the warms.

When I'm not baking, we've been kinda working. We're juggling two books, and to make it easier to get the details right, we stopped about halfway into one of them and started taking notes for the other. And dang...we've got 83 pages of notes on that one. I think the Woman will have more fun with that than I will, because it's more adult than the others.

Oh, and she has a giant bottle of Stupid Drink called Fireball, and she's talking about drinking like 3 or 4 shots of it and then sitting down to write. This could be awesome, or just awesomely awful, but I'm kinda looking forward to it. If she gets stupid enough, I might even be able to talk her into a new character, a horse-sized cat named Fluffy.

Doods, can you imagine? I'm talking like a Clydesdale size of horse. BUT A CAT!

The Man ripped the Whovimas tree limb from limb yesterday and shoved its corpse into a box and then took it out into the room where the rumbly bikes live, as if I didn't still want it. He waited until the Woman was taking a nap, so I know she was not in favor of taking it down. It was a sneaky thing to do, but she didn't yell at him or anything. Probably because she has a cold and she sounds like a frog and can't yell at anyone.

Naps have been happening like twice a day for her, for 2 hours at a time, and she still goes to bed at regular time. That's how we know she's really sick and not just feeling icky. When she feels icky, she sits in the living room and whines about it. When she's sick, she sleeps a lot.

We prefer it when she's sick.

Also, she keeps turning the fireplace on, so even though the tree is gone the living room is a happy place to be...well, right up until the moment she decides her eyelids have gained 40 pounds and she can't hold them open anymore. The she turns it off and wanders to the back of the house. 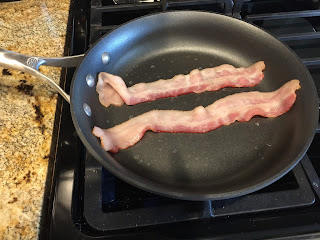 Lady, I got news for you. It's not your eyelid weight showing up on the scale.

Oh, and there's been bacon lately. I'm not sure how this ties into her not feeling well but I'm not questioning it. She made bacon twice, so the treats have been extra special.

See, another reason we prefer it when she's sick.