I've had a couple of requests on this lately, so... I present, the Reading Order of the Wick Books:

The Wick Chronicles
The Emperor of San Francisco
Ozoo
Forked

Return of the Wick Chronicles
The Whens of Wick
The Book of Hyrum
Jump (end of summer release; title subject to change)

Look at this. LOOK! 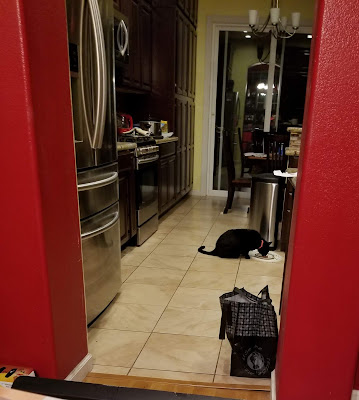 Last night I didn't finish my 9pm snack, thinking I would save a little bit for later. The Woman and I were at the desk doing some rewrites and I looked up, and BUDDAH WAS EATING MY FOOD! Worse yet, he hadn't even eaten all of his own! HE HAD FOOD ON THE COUNTER! 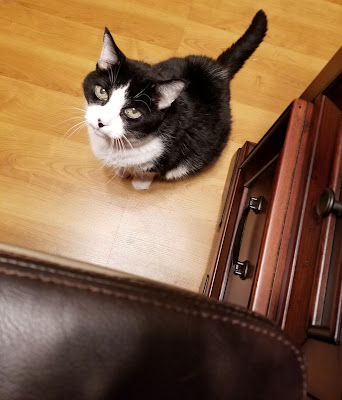 Spoiler:
She did not make him stop.

For the most part, the rearranging of things has stopped. Now the people are trying to get things cleaned up, because rearranging everything creates a bigger mess than it cleans up.

Also, they put a new rug in the living room, so Buddah and I are trying to decide who gets to be the first to barf on it. The Man cleaned the other rug that went into the front room, and I made sure I horked on it a day later, because rugs in homes with kitties should never be hork-free. That's like a law. Or something.

We've had the hots here a lot lately, prompting a lot of people-whining. But dang, doods, it's summer, what do they expect?

The Woman just wants to go outside and ride her shiny neon pink bicycle but is too lazy to get up at WTF o'clock to ride before it gets hot. She SAYS that's because it's still dark out when it's not that hot, and she's night blind, but we all know the truth.

I really do think that in a previous life, she was a cat.

The rearranging of things hath begun...


...and as expected, Buddah lost his chit and thought we'd moved again. But he's reaped the most so far; he loves to be UP, and now he has an even better UP than he had before. He still has the staircase-like bookcases to climb (on the left there, only partially visible) but now they lead to the top of the Very Tall bookcases, and at the end of those he has the TARDIS where he can hide and nap.

When they get done with the other room, which used to be the living room, he'll have another UP, but not as high up. Well, two more UPs if you include one he's already got. I'm totally on board with him getting so much out of this, because maybe then he'll leave me alone.


♦♦♦♦♦♦♦♦♦♦♦♦♦♦♦♦♦♦♦♦
There was a near disaster yesterday. We ran out of steak bites. Like, I ate the last of them in the morning and realized that was it for the day. The Woman said she was sorry (but I don't believe it) and if I wanted a snack it had to be something else. I almost told her to shove that other snack, but then I realized it was roast beef, so I ate it. And tonight, there were fresh steak bites! The People sacrificed and went out for dinner and brought home a steak for me to last the week.


Ya know what? 4th of July is over. People can stop blowing chit up now. As it is, there's a weekly game of Gun shot or Fireworks people in this town play on Facebook. This week it's like...holy carp. Gun shot or Firework or cannon blast. Enough. Please. 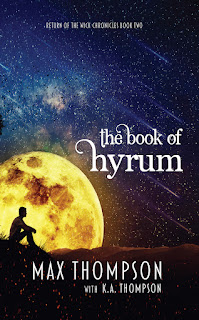 This hit Amazon a heck of a lot faster than we expected. The paperback probably won't surface for another week or so, but the Kindle version is already out now. The Book of Hyrum.

It's the second book in the Return of the Wick Chronicles, and one of y'all features prominently as a member of the Royal Guard, providing comedic relief and a pivotal moment that had the editor saying she wants this character to stick around.

Most of all...y'all are gonna love Hyrum. The Battleaxe Editor loved him and so did the beta readers. He's basically an 8 year old boy stuffed into the body of a 43 year old man who just wants to be good, and he walked across an entire continent to deliver a two-year old message to the Queen: Daddy wants to kill Red and the Prince. He doesn't know that the war started and ended while he was on the move, and he has no way of knowing that Florida and Pacifica are on the brink of a renewed war, this time with nukes. But man, he's gonna make sure he gets that message out, and then he's never, ever eating peanut butter again.

There was actually a discussion amongst the editor and the Woman and a couple others: will there even be peanut butter in 400 years? Or bananas?

There probably won't be any bananas, but we left references in. In my head, this is kind of an alternate universe, anyway. This universe gets to keep their bananas. And Jell-O, too.

We've also discussed whether or not there will be shrimp in 400 years. For Wick's sake, there's shrimp, because it seems mean to not have any. But reality, doods...there might not be a lot of real live fresh dead things that we like so much. And that sux.
Posted by Max at 7/09/2018 07:15:00 PM 6 comments:
Newer Posts Older Posts Home
Subscribe to: Posts (Atom)