But cripes, couldn't she let me have it for five freaking minutes? Or turn the other one on for me?

The only good thing was that she stayed home and kept the fire place thingy going, so at least I had plenty of warms.

But geesh...I was beginning to think she was going to take root right here in the living room.

Whoa. Doods. I don't know what is going through the Younger Human's head, but remember last year when he jumped in the icy cold water and risked permanently shrinkage of his fun bits to raise money for Special Olympics?

Yeah, I don't get it, either. If I still had mine I'd protect them with my LIFE.

This is him pretending to be some dood named Mercutio.
I think he was singing five...five...five dollar don-a-shun...

But, he's doing it again, and this time someone has donated a really nice prize that donaters have a shot at getting, just in time for holiday shopping.

Seriously. Doods. A $250 gift card to Amazon.com. $5 gets a person or kitty a shot at winning it, and it's gonna be drawn for on December 15th.

Go to Curt's Polar Plunge for more details. And if you can't donate, can you at least help spread the word? It's for some important Sticky People, and it'll make someone's day when they win.

Ya know, I was sitting here watching the Woman do lots of nothing and it was bothering me, so I finally asked, "Hey, when are you going to get up and stick the turkey in the oven?"

So I asked again.

And she said, "What do you want Max?" and I'm still sitting there, but now instead of wondering why she's not cooking the turkey, I'm thinking she's pretty freaking dense. There's really no point in talking to her, so I just stared at her.

If you stare long enough, it freaks people out.

After a while she mumbled, "what time is it?" and I thought Score! She's going to start the turkey! but dang doods, she was only seeing how much longer before she has to pound out meat for schnitzle.

I am full of Teh Disappoint. 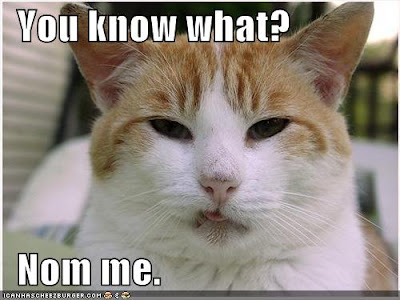 I love all my CB friends. Since the CB started getting bigger, it's gotten a lot more fun. But just a few short years ago, it was kinda small, and I've known some of you longer than others.

I remember when The Big Piney Woods Cats were The Calico Girls. Patches made the first post to their blog just before Christmas (and yeah, I went and looked, but still.) The Calico Girls were always funny and very sweet, and I like them all.

So when Patches had to go to the Bridge on Friday, it was kinda like someone pinched my useless nipples really hard. I really wanted her to get better, because the CB is brighter with her in it. I have to think about how much fun she's going to have at the Bridge, and how many of our friends are waiting there for her, making it easier for her to learn her way around. I know they're going to take care of her just fine.

Her mom posted this picture of her, and I really love it. I hope it's ok that I swiped it. 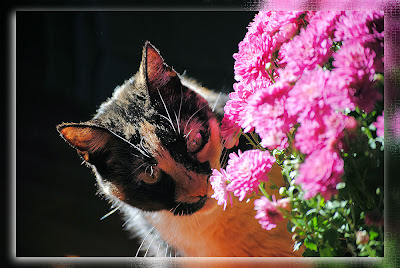 Doods....hahahahaha....I'm laffin and laffin right now. Have you seen Harley's blog post today? Go look at it. Hahahahahaha... he's practicing his modeling and he's got some GREAT pictures. The cheesy one made me snort goop right out my nose!
Posted by Max at 11/16/2010 09:18:00 PM 13 comments:

Cheeezeburger has this video or one really like it and we need to get them to take it down before our people start to THINK! Because thinking + people is never good.

All right, I'm kind of annoyed right now. Because we have a lot of stuff, the People tend to rotate it, and they put a bunch of our favorite things in the rumbly bike room a while ago so that they could pull it out later and try to trick us into thinking we had new things.

Some of my favorite things got put in there, and today when they were going through boxes and stuff, you know what they found?

And what else they found?

They found that before the rat committed suicide on a trap, it peed and pooped on some of my stuff. MY STUFF! And the Woman was all Oh Noes! We can't let them have that now! And she threw my stuff away! 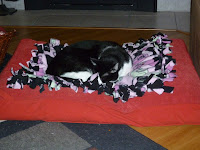 Luckily I have a new throw to curl up on (I won it! From Skeezix's Food Lady!) so I'm not as annoyed as I could be, but there better be new stuff coming my way.

The only good thing is she says none of the presents my friends have given me were in with the stuff that got rat-peed on, so that's a relief. But she says one thingy has to be washed, but because the rat got to it but because it's time. Whatever that means. 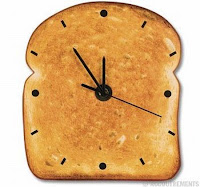 Dangit...you know what the People are going to do tonight? And not just my people, yours, too. Tonight they are going to change the time on the clocks--they're going to push it back an hour!

They do this to us twice a year, and I'm pretty sure that they're just doing it to screw with us. There's no good reason for it, so I can only conclude that it's because people are a giant collective of MEAN on their part.

'Cause you know what's gonna happen. No matter what, we're all going to get fed an hour late tomorrow. Push time forward, push it back, either way, the people muck it up and feed us late.

So tomorrow morning, dooods, start in about 3 hours early. Jump on them while they sleep, shove your nose up one of their nostrils, flop your fuzzy asterisk down on top of their faces. Oh, they'll be annoyed, but I bet they get up and open a can just to stop you. 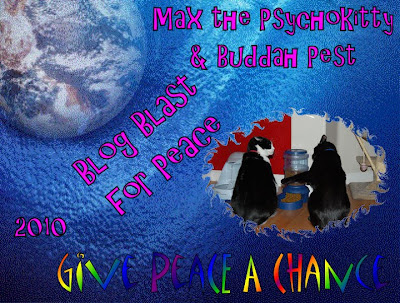 OK, all I've heard from the talking heads on TV lately is GO VOTE on NOVEMBER 2ND.

And then last week this thingy came in the mail and it said SAMPLE BALLOT. So I licked it a few times and realized it wasn't that kind of sample, so I started reading it.

And doods...you won't believe this...but in California they have this proposition that would make People Nip legal. All this time I've been enjoying the kitty crack, but the people don't get to. Which explains why they're so cranky all the time.

Well. I thought that was unfair so I decided I would suck it up and go outside today--and you know how much I hate going outside--and find the place where everyone gets to vote. I was ready first thing after breakfast, but you know what?

The people wouldn't let me go! Apparently speciism is not only legal but encouraged and kitties are not allowed to vote! WTF? In People years I'm legal enough. I'm like the equivalent of a 50 year old, right? I brushed up on the issues, I knew exactly what I was voting for and against and for whom.

But no. I had to stay home.

Before the Woman could shut the front door, though, I yelled out VOTE PROP 19 FOR ME, and doods, I think she did it. Oh, she says she's thinking of the tax potential, but we all know better right? She totally wants to make some magic brownies and special rice krispie treats.

It was a painful accident, but I totally have a way to get the Woman to give me what I want. Earlier tonight she stepped on my foot. And I don't mean just a little, I mean she STOMPED on it with all her 598 pounds. Give or take 5 pounds. Maybe 10. And not 10 to her benefit. Anyway, she stepped and I SCREAMED because, doods, it hurt!

Anyway, I ran a few steps away and stopped, and she was all Oh no! Are you all right? so I lifted my paw up like it was a major OUCH. And man she felt bad.

And then she gave me treats! After I had them I walked away and she was all Ok, he's fine but I still feel bad so later when she was playing on Facebook I walked up and lifted my paw, and she got all awwww and got up and opened a can of Stinky Goodness!

She said she was feeding me because it was dinner time, but doods, I know better. It was THE PAW.