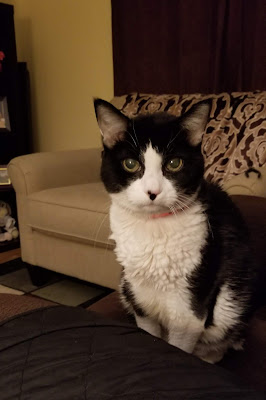 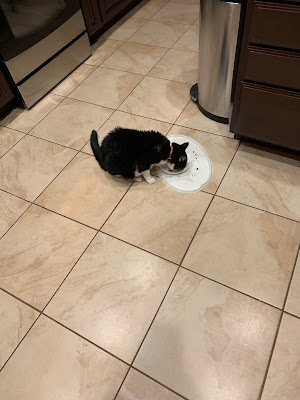 Apparently I am a sloppy eater.

This does not bother me. It doesn't really bother the People, either, but they still bring it up a few times a week, usually when they're washing my place mat.

I dunno what I was eating when they snapped this picture, but a few days ago, after not getting any for a long time because they thought I was getting tired of it, there was steak.

Not just any steak.

Because the Woman prefers the ribeye and knows I like it best, and what I like, I get.

This is one of the perks of being an old man. Don't fear getting old, doods. When you're old, people will do just about anything you want, if they can. I want ribeye, I get ribeye.

I think it stems from the Man's days working in nursing homes when he was a teenager. He had this one patient, an 80 year old diabetic, who just wanted a slice of his birthday cake. The nurses wouldn't let him have it, because diabetes. The Man has always thought that was kinda mean, that if you hit 80 years old, and you have something like diabetes, you know the risks. You know how to account for it. And old men should get their damned birthday cake.

So I get my damned steak, and I get ribeye if the store has it when they go shopping.

I'm glad they got me one this week. I kinda missed it, even though I was getting real live fresh dead shrimp and other dead delicious things.

I think I get a fresh one tomorrow.