Wow, you know when People don't get enough sleep, they look like doody all day long... I don't know why the Woman stayed up until 4 in the morning, but then she got up to feed us at 7:15, and even though she went back to bed she couldn't get back to sleep. It had nothing to do with me standing next to her head, meowing, no matter what she says. And I'm pretty sure it had nothing to do with Buddah trying to get the window blinds open. But man, she looks kind scary today...

Yeah, I don't know why Buddah and I both crawled into bed with the Woman this morning and woke her up by NOT fighting, but we did. And I don't know why she didn't get mad that we were waking her up when it was still dark out, but she didn't. She just pet us both, and we all curled up and went to sleep.

I've had this odd compulsion to be very nice to her today--I've sat in her lap and let her smother me with kisses on the top of my head, and I haven't been really snarky to her all day--but I don't like it. It's just not natural.

Hopefully it's just a one day thing and I'm not getting sick again. That would totally bite.

What's wrong with waking someone at 6 a.m. just to be petted?
Does it matter if I do it every morning?
Is it a problem if I do it just an hour after singing the most beautiful Stairway melody?
Will they ever appreciate me?
Posted by Max at 12/27/2005 07:44:00 PM No comments:

Merry Christmas everyone! I hope you had as much fun as Buddah and I did. He was like a little crackhead, but I got into it, too, mostly trying to jam my head into the biggest box of crunchy treats I've ever seen. There were lots of toys, but honestly, I just wanted the treats. And the People gave us tons of treats today, even some turkey and ham. The little crackhead that he is, Buddah likes ham more than turkey. I mean sheesh, it's turkey!

Oh, and in spite of the picture, Buddah really isn't bigger than me. He's actually a lot smaller still. The Man took the picture so I'm not sure what he did, but Buddah does look big in it. I'm not sure he's ever going to be as tall as I am, so if he winds up weighing as much he's going to be really FAT. But it's ok because I don't think he cares. As long as he has toys and someone to tell him how cute he is he's happy.

I've been sitting here, thinking, in between bouts of trying to get someone to feed me early. I feel like I really missed someone special by not finding Eppy's blog sooner, and I know there are prbably lots of other kitty blogs out there and I want to know all the good kitties of the blogosphere.

So please, take a look at the links I have to the left right; if you know of a kitty blog that's not there, please tell me in the comments. I want to visit them and spread my snarkiness around.

Oh, and since I don't know if Buddah will brag on himself, yesterday one of the rude cats came to the back door while he was sitting there, and he popped the glass just like I showed him, and tried to make a ferocious growl (he doesn't quite have that down yet) and he made the rude kitty go away. 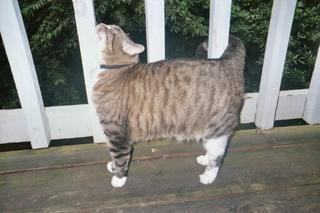 The cats and dogs who Came Before Us are at the bridge, waiting to meet you and play with you and take care of you until you see your Cowboy again. We're going to miss you...I wish I had found you online long before I did.

So. Yeah. I like muffins. I like cake, too. But when they have stuff like that are they willing to shre? Noooooo...that would be the nice thing to do. Oh I got a minisucle little bite, but barely enough to taste it. The only good thing was that Buddah was upstairs asleep, and he didn't get anything at all.

Go look! Click on the picture!
There's lots of pictures of us opening it, and you get to see who our Secret Santa is! If you click on each picture, you can see a bigger version.

Ha! He did it. It was too much to resist--Buddah got caught nibbling on the Christmas tree.

And no, I didn't warn him ahead of time that it's plastic.

Ok, no matter what I say to the little bugger, I can't get Buddah to mess with the Christmas tree. I've told him how fun it is, I've told him it annoys the People which makes it even twice as much fun, and I've told him that if he can get to the top without knocking the whole thing over Santa will bring him an extra toy (I'm pretty sure about that last one. Santa would be impressed.) I've even told him that I can't mess with it until he does, because it's tradition for the youngest to get first whack at it, and I'd really like to mess with it, so he needs to.

He's rubbed against the lower branches and sniffed hard at the fiber optic thingies, and he likes to get behind it, but he won't chew on it or bat at it or climb it. What kind of cat is he??? If he doesn't start screwing around with the tree, I certainly can't because I don't want to hear any "Oh, be more like Buddah" crap, but I want to bite the tree! I want to play with the dangling thingies!

Well they finally put the tree up. We haven't done anything to it yet; Buddah's not too sure about it but I can tell he's warming up to it being there. I'm waiting to start yanking the plastic hanging thingies off until the People have relaxed and decided I'm going to leave it alone. Yeah, we all know what the odds of that are.

After they got it up they started chasing us around with the flashing thing. And now there are new pictures at Max & Buddah December 2005. You can click on them and see bigger pictures.

All this moving around of stuff and they didn't even bring in the inside tree! I had kind of hoped that was the whole reason, because we were getting our tree. I hope they bring it in soon. I want to see how much trouble Buddah gets in for climbing it. And you know he's going to try...
Posted by Max at 12/07/2005 09:55:00 PM No comments:

So what do the People do? They start moving furniture around, add a really big table, move more stuff... They moved the Supreme Commander Kitty Tower! I liked where it was! It was right where we could jump onto the table if we wanted. Now it's where we can jump onto a counter, but that's not the table!

Oh, and they didn't even have the decency to bolt the Supreme Commander Kitty Tower to the wall right away. I jumped onto it and it swayed and tilted away from the wall a little. My tail coulda gotten caught there!

I don't know what my problem was yesterday; I felt fine all day, had to work the Woman in a major way to get Stinky Goodness a little before the regularly scheduled Stinky Goodness time, but by the time I got upstairs after dinner, I didn't feel so hot. So I threw up. All over the floor in the Woman's office.

It was a good one, too, all chunky from dinner...and she didn't discover it for like TWO HOURS, so it sat there and got all gnarly. She got paper towels to scoop up the chunks (and choked and hacked her way through it, since barf makes her want to hurl) and then the Man got out the carpet cleaning monster and tried to get the stain out.

Ha. That stain's gonna be there a while.

I curled up on the bed in the room where the Man plays his computer games, and the Woman came in to see if she could figure out just who had done the barfing, me or Buddah, and when she touched me she said I felt really hot, so she was pretty sure it was me. She petted me for a bit and then said she would leave me alone so I could rest, and made Buddah go with her.

She doesn't realize he came back 5 minutes later, but he wasn't a butthead. He just wanted to be in the same room.

I felt fine when I woke up this morning. The Man came home from passing gas and opened my favorite Stinky Goodness, and it stayed down. But those people are going to fuss over me until they're sure I'm okay. I swear, that Woman seems to think I'm just going to keel over one afternoon. I don't think it's occured to her that maybe SHE gave me cooties and made me throw up. She's always kissing the top of my head. That would make anyone hurl.
Posted by Max at 12/03/2005 08:16:00 PM No comments:

We have one of these.
It's not like a space heater, it's a heater thingy that only heats up the person or kitty sitting in front of it. At the risk of sounding really stoooopid, I big pink puffy heart this thing. It's one of the most awesome things ever created.

But the Woman has not turned it on for me yet. And Buddah doesn't even know of its magnificance! The Man has used it in the bathroom while he soaks in the tub, but I'm not about to lie on the edge of the tub just to get some heated wonder going.

So, since the Woman has not yet used it in the office...turn up the freaking heat!

I heard the People talking about Christmas earlier...I'm hoping that means that we get our inside tree soon, and then Santa will come. I had a hard, hard year, so I deserve a really good present, right???
Posted by Max at 12/01/2005 06:31:00 PM No comments:
Newer Posts Older Posts Home
Subscribe to: Posts (Atom)