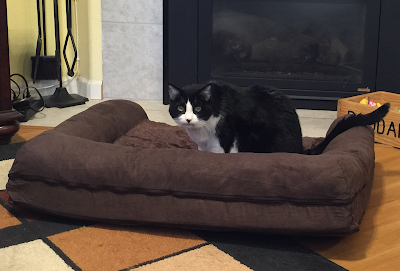 The Woman bought it for me because it's meant for old bones, and she thought I would like something really spiffy to lounge upon in front of the fireplace this year. It was not cheap, which of course means that I sat on it once (as you can see) and then refused to go near it again.

I like my other fireplace bed, and wanted it back. So she finally caved in, and put my preferred napping surface back in place, and the Man took this one and set it on the coffee table in the front room. He never intended to leave it there; it was just until they figured out where it would live permanently.

Then this happened. Several times. 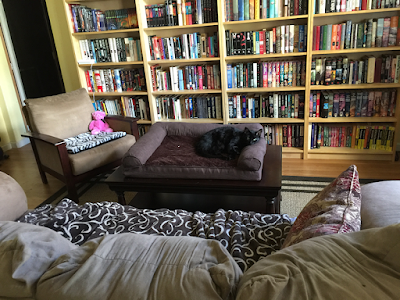 I didn't like the bed, but someone else did. And he really likes it on top of the coffee table.

The People don't drink coffee, so they decided it could live there for now, until Buddah gets tired of it, then they'll move it someplace else.

Happy Blogoversary to me!!!

We started this blog 13 years ago, when the Man and the Woman and I were living in Evil, Ohio, where there were tons of sticky people outside my window and lots of red stupid drinks being consumed.

In that time we engaged in the M-Word way too many times, Buddah came to live with me, a bunch of you helped write 2 cat blogger books (we totally need to do that again!), I bought a house (don't let the people fool you, I know I paid for it), and I've met so many super cool doods. A lot of the cats who started blogging along with me have gone onto the Bridge--and I miss them like crazy--but we'll see 'em again on the flipside. So many new kitties have taken up blogging that there's no way to keep up with them all.

And to think...when I started, I couldn't find any others. Now look at you all. 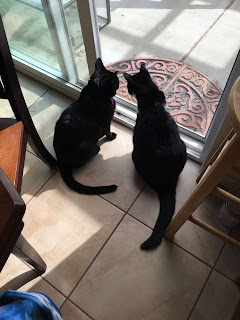 The last few days the People have been able to open doors and windows to let the fresh air in, which is nice because I was getting pretty tired of the hots.

I'm ready for cool days, and even more ready for the fireplace, which has only been turned on twice lately, and then just for a little bit to burn the smell off.

Apparently, the fire gets all stinky over summer. Who knew?

Even better...there are only 2 months until Christmas. Which means it's even less time until the People set up my Doctor Who tree, so that I can celebrate Whovimas, too.

Like every other year, I'm asking Santa to not bring me anything but to take extra stuff to the shelters for the kitties and woofies who don't have a forever home, I don't play with toys anymore, anyway, except for the occasional romp with a good nip banana (and I have a supply of them), and I have all the beds and stuff a guy could ever want, so it would be a wasted effort on his part.

And we have a new goal this holiday season...you know how we try to fill the back of the HHR with toys for Toys for Tots? Well, this year we have the CX5 and the back is way bigger, so we're hoping to fill that. That's where the money goes when you buy my books: toys, stuff for shelter pets, and various charities.

Maybe, Possibly, In the Can

I don't know what that means but I heard the Woman say it last night. She said it as she hit SEND on an email sending the next book to the editor. That doesn't mean it's 100% done, but it's done enough to show it to the person who will say how awful it is. It's also done enough to start the graphics train moving, finding cover art and picking a spiffy font, and done enough to try to figure out what the blurb will be.

I leave that part to the Woman, and she hates it. She says if she could condense something to a paragraph, she wouldn't be writing book-length things.

While we're waiting on the editor, we're plowing ahead into book three. We have the story, some notes (which will be expanded) and know what's going to happen. It's just the process of getting it written. Sure, no biggie, right?

I think the rest of this month will be notes and stuff, and the actual writing will start in November. The Woman is thinking about doing NaNoWriMo with it this year, even though she loses a week to the 3 Day Boobie Walk. We can write enough words in a day to cover that, I think. It works out to around 2700 a day for three weeks, and it's not unusual for us to get 5,000+.

Okay, so the Woman got up at a normal people hour and fed us at 7:20 this morning. Now, normally after I eat in the morning I go take a nice 4 hour nap in order to prepare myself for the nice 3 hour nap I enjoy most afternoons. But this morning I decided to stay up, and I sat on the end table near the Woman's comfy chair and stared at her.

That's it. I sat there and stared.

I was still for a good half hour, until she was finally unnerved enough to tell me to go find something better to do. And that seemed perfectly reasonable, so I jumped to the chair's headrest and started meowing in her ear every 6.35 seconds. Right about the point I knew she was getting irritated, I jumped down, sat in front of the treat machine, and politely requested that she remove a few for me.

Sure, I can get stuff out of it myself, but why? I already know that if I ask nicely, she'll do it for me. And she did, she got up and put down a handful of the dry Fancy Feast food that serves as filler in the treat machine. And since she was up, she decided to get her own breakfast.

Well...I was not going to eat dry krap if there was a chance at something better. So I followed her, and reminded her I was there, and I would like to know what she was planning on having, just in case it was something I would like a taste of. That's all I expect, a tiny taste. And I was filled with disappointment when it looked as if she was going to have the same oatmeal bar she usually does, but she looked down and said, "You're still hungry, aren't you?"

Now that you mention it...

So before she had her own breakfast, she opened another can and gave me a spoonful from it, and gave Buddah a spoonful, and it was the kind with gravy and chunks of meaty wonder. It was awesome.

And now I can go take my nap, which is over an hour late, but totally worth it. While I sleep, she gets to go through my newest manuscript to look for typos and chit.

It's a hard life.

Oh, and I have more hardbacks of The Emperor, if you want a pawtographed copy. I have paperbacks, too.

Link to purchase is in the sidebar.

If you don't want the pawtograph, Amazon is the next best place to get it.

Royalties from this book (from release date to around December 1st...I won't actually get paid by then but I'll know the amount and can borrow from the Woman) will go toward buying Christmas toys for Toys For Tots...and we have a new car to load, and the load space is way bigger than the HHR!
Posted by Max at 10/07/2016 09:44:00 AM 4 comments:
Newer Posts Older Posts Home
Subscribe to: Posts (Atom)