She got the answer right, but it was the wrong question...

Okay, so a little while ago I looked out the window, and could see that the leaves in the big tree outside were, like, dancing, and that means there's a nice breeze. I enjoy a nice breeze, so I marched over to where the Woman was sitting, and asked her to open the door.

Now, I expect to have to ask things 5 or 6 or 100 times before she listens, but this time she looked at me and said "All right" and she got up...

...and headed into the kitchen, where she got me some crunchy treats.

Clearly, she has learned: the correct answer to any question is a handful of crunchy treats.

The Man has a tummy ache today; normally this would not concern me, but I was going to nap on his bed because the order of things is that once he's up in the morning, that bed is mine for the rest of the day, but then the Woman told him he might feel better if he laid down for a bit, and now my nap spot is taken and I don't like that one bit.

The One Where I Nearly Starved To Death. Twice!

The People hung around the house yesterday, being giant pink blobs. That's nothing new. That's so normal that I didn't think anything about it, and took my naps in all my favorite snoozing places. I didn't even think anything when the Woman put real pants on, and when they both left the house around 4:15, because they do that once in a while, too, and sometimes come home with real live fresh dead meaty things.

But yesterday they left, and didn't come back.

They didn't come back for FOREVER.

By 9:30, I was feeling faint and and twitchy, and I was so thin my furs were hanging off my bones like a bad winter coat. It was so bad, I started to contemplate eating dry food. DRY FOOD.

They finally walked in and fed me at 9:45, which was only 15 minutes from snack time. I ate my dinner, and then went into the living room to inform the Woman it was time for our snack. She told me no! As if skipping snack was acceptable!

No, you just ate.

I thought maybe she was kidding, so I waited in the chair next to hers, and eventually she got up, but it was not to give me my snack. It was to go to bed.

I had to wait until 4 am to get a snack, and that was from the Man. He said it was a shut-up snack, but I don't care what it was, it was LATE.

He closed the bedroom door, so that I could not wake the Woman for breakfast at 7:30. I did my best, sitting outside the door and calling for her, but I grew weak from hunger and I don't think she could hear my tired, food-needed pleas. She didn't feed us until 9 o'clock.

Doods, I am lucky I survived.

And all that because she went and got another tattoo that's not of me. So, so rude. 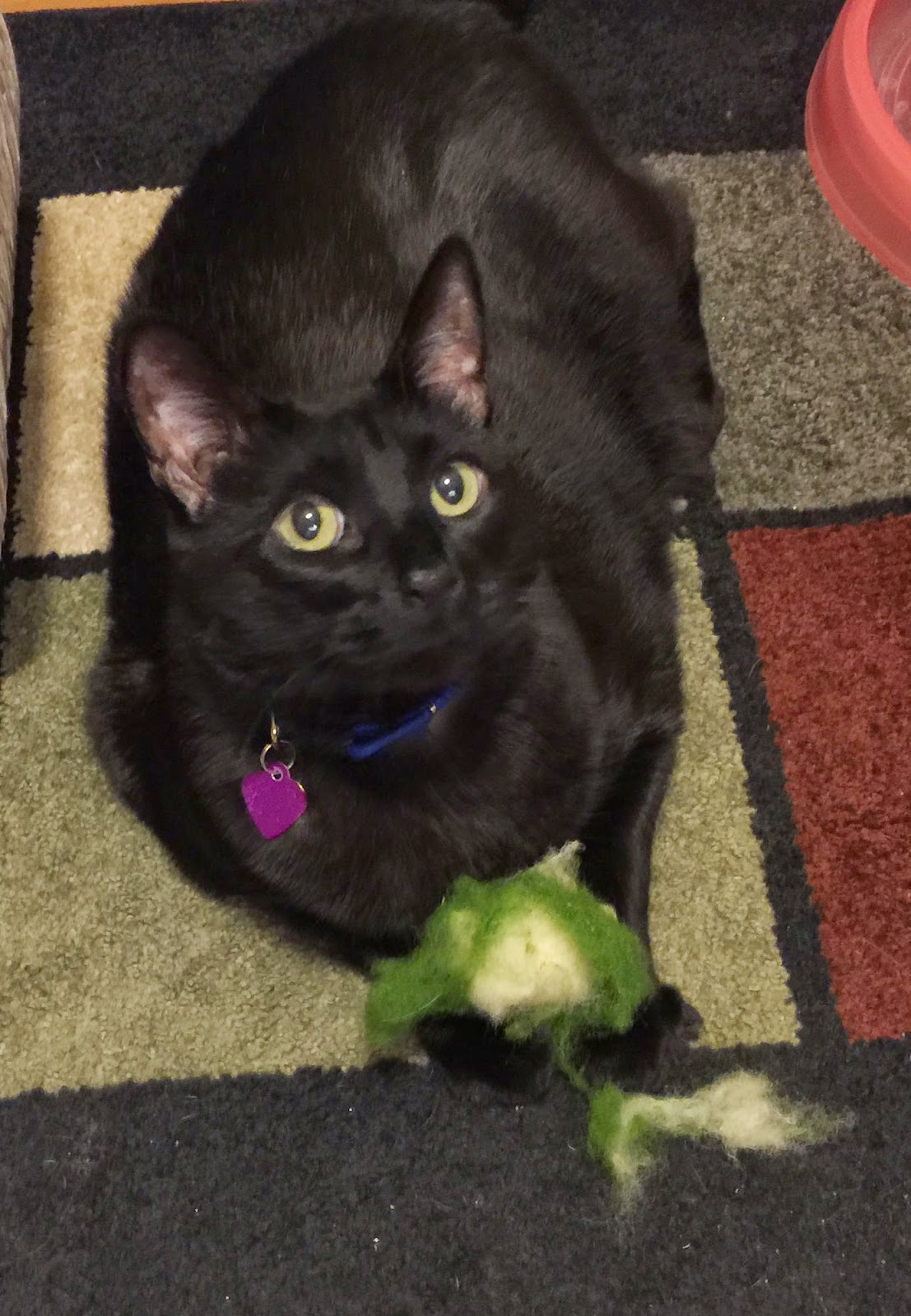 That's an entire decade, and in a few week that means he's been a pain in my asterisk for AN ENTIRE DECADE.

He bites, he jumps on me with no reason or notice, he scratches, and he's unintentionally mean (really, I don't think he knows his behavior is often inappropriate) but for some reason the People still like him.

Today he gets to nap on MY tower in the Woman's office, and he gets a new nip toy when he wakes up. Plus. I did some stealthy shopping on Amazon and tomorrow he gets a new nip banana...I think he's ok with his present being late.

I dunno why people think Friday the 13th is unlucky...I got steak today.

If this looks familiar, you saw it on Facebook...*

The time change has thrown me off my game...last night I didn't even ask for my 10 pm snack; at 10:30 the Woman looked at me and asked if I was hungry. This morning, the Man was up before I was and I had to scramble down the hall to make sure that I didn't miss breakfast. I'd complain, but having light at the end of the day seems to make the Woman happy, and I'll adjust. Maybe.


*The FB in the sidebar just isn't working for most people. I'm not sure why; you don't need a FB account to read it, but it seems simpler to just cross post  to the blog. So if you also have me on FB, you'll see things twice.