Yep, time for a change

I have carefully cultivated a night time routine that suits me quite well. After my 10 p.m. snack I stretch out on the big comfy bed until around 11:30, when the Woman comes into the room and sits in bed to read before shutting things down for the night. When she comes in, I yawn, glare at her, and then jump down, making sure she understands that I am not happy; I was comfortable and don't want to share the bed.

After I get some dry noms, I take a nap in her chair in the living room, waiting until 4:30 in the morning, when I jump up onto the bed right by her head, and meow softly. She wakes up just enough to give me head skritches, and then I plop down and let her sleep until it's time for breakfast. She gets up, feeds us, stumbles back to bed, and I go plop down by her head again. When it's time for her to get up for real, I meow her away, get head skritches, lead her to the giant litterbox room, I make sure she does everything in the right order and that she doesn't forget her drugs, then I lead her into the kitchen so she gets a fizzy drink.

After all that, I'm tired, so I get some dry noms and go back to the big bed to sleep for a few hours.

This routine has been really nice for a long time.

The problem? She noticed it. She told the Man how I've been getting head skritches at 4:30 but I'm not keeping her awake, and that she likes that so much more than the concertos I was holding in the hallway.

Now I have to change the routine. It's bad enough she noticed it. She LIKES it. Clearly, I have to resume singing instead of getting head skritches. I won't enjoy it as much, but a guy has to do what a guy has to do.

I can't go around being predictable.

I hope she enjoys the music I've selected for tonight. I call it "Cat Tail Under Giant Foot."

Um. No. I had the Grandma, who provided food and treats and a lap. Yes, a lap. AND SHE WEARS PANTS. The Woman could learn from her.

So I haven't been hanging all over them, trying to make them think they're being gone was important or anything. In fact, I was pointedly ignoring them so they would understand they're not exactly necessary to my having a complete and wonderful life. Plus, they didn't bring me anything, so why should I fawn all over them?

They did do this for me while they were on their way home. 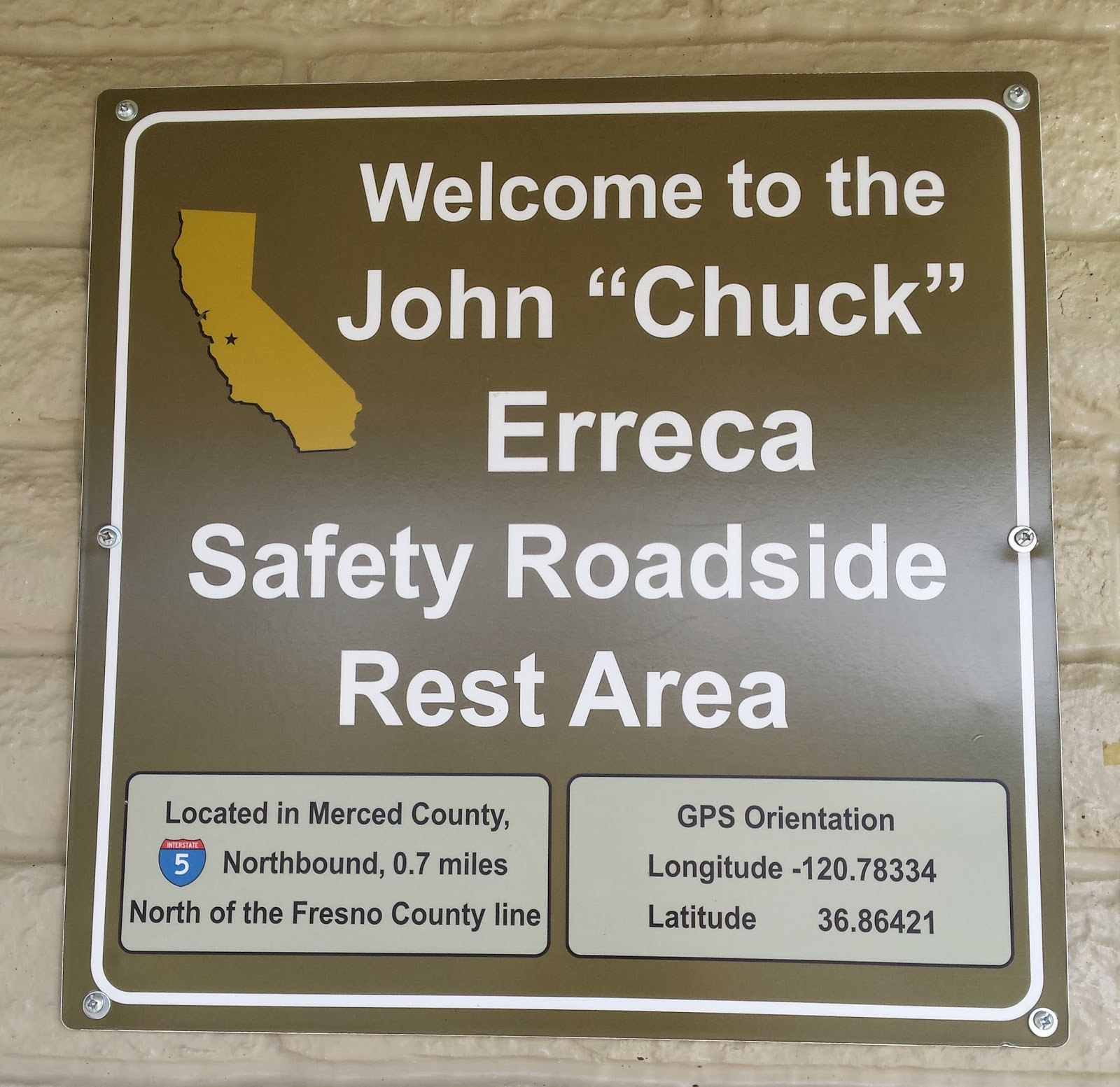 They stopped at the Chuck Erreca Rest Stop, the one that Skeezix made world famous, so they could give him a salute for me, and see the places where his awesomeness had been.

Fun fact: if you do a Google Image Search for the Chuck Erreca Rest Area, you get to see a lot of pictures of Skeez. And some of Mr. Tasty Face.


They didn't even have to pee; the Woman knew the rest stop was along the way so she told the Man she wanted to stop because Skeezix had been there, and he was all, "Well, of course," so they stopped to pay homage to him. She knows how much I miss His Royal Pinkness. Since I don't like to go outside, having them stop there and take it all in (including, she says, some pretty funky odors) was a pretty cool thing.

So they went to the House of Mouse and didn't buy me anything, but they got to see something that Skeez made ultra world famous, so I think I'm kinda cool with that.

I'm not too sure I'm cool with this, though: 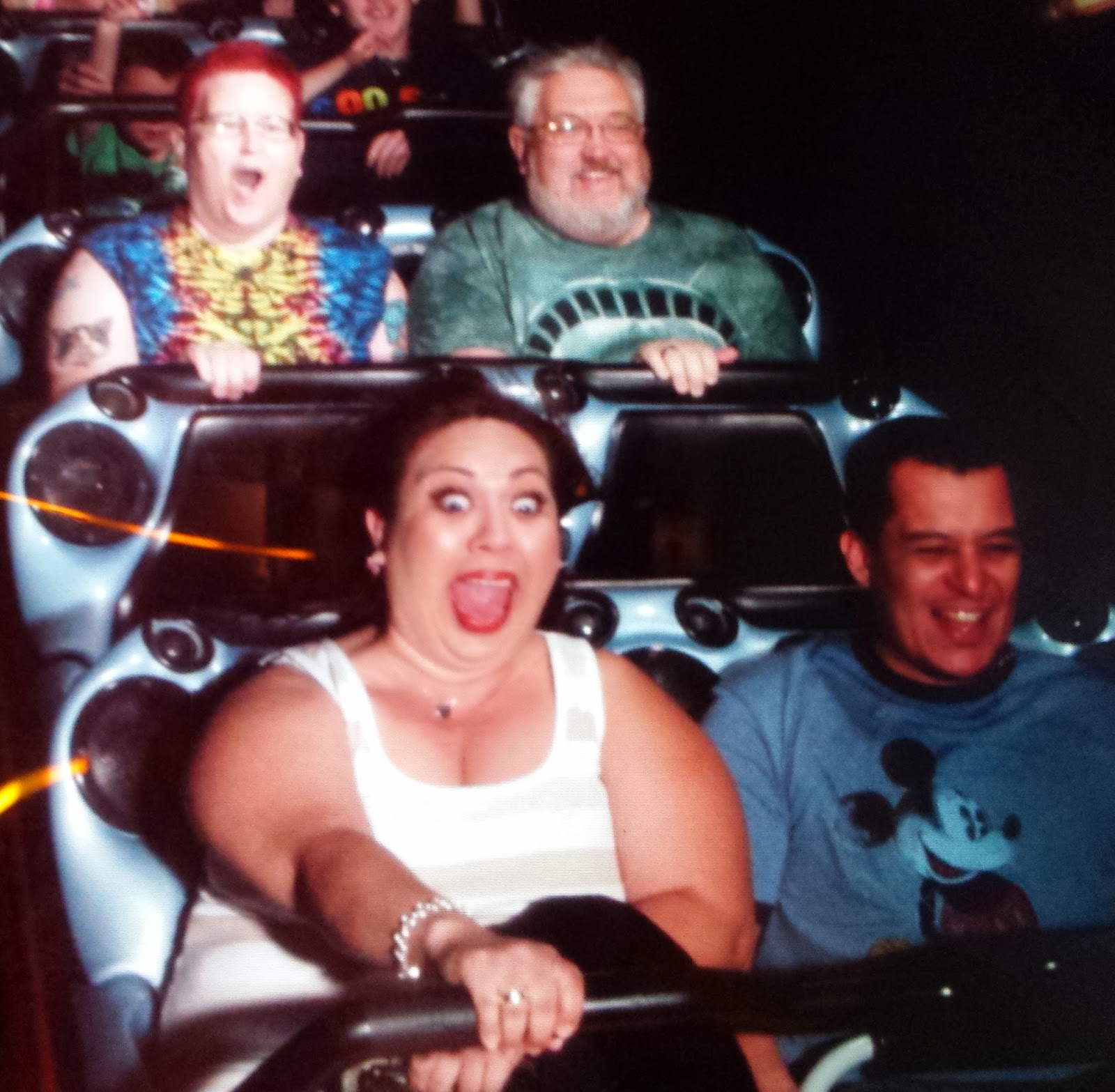 Is she SINGING? What the heck, doods. She must be singing, cause that lady in front of her is screaming and the guy next to her is laughing. Yeah, she sings that badly.

These two kitties are going to need someone sooner than anyone would like, and my gut says they need to stay together.

I'm hoping one of my east coast/NYC buds knows someone who would be able to provide a good home for them when the time comes, or help in some way.

They don't deserve what might happen to them if no one can give them their last forever home. They've been really, really important in getting two people through some awful things...