This is what the Woman walked out to at 7:30 this morning. 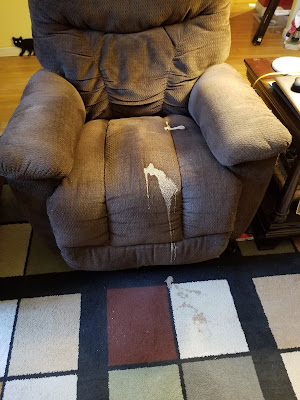 Buddah managed to hork all over her chair AND he nailed the rug. He's fine; he just throws up a lot.

This is now out.

Third book in the Return of the Wick Chronicles series.

Doods, this one is really good. It picks up a couple months after The Book of Hyrum, when things are being invented and Hyrum's want of his lost wallet gives the Emperor and Drew a chance to test out one of those things--they go back a couple years and follow Hyrum on his walk across the country. Let's just say that journey was not what they expected and you might appreciate Hyrum a little bit more in the end.

So far, you can get it in print [Amazon right now, other online stores to follow] and as an ebook...in several stores. It's at Amazon [here] and is rolling out to other online books stores. The best way to see if it's at your preferred book seller is to check Books2Read [here]...they'll update available stores as it reaches their distribution channels.

Slowly but surely, all the Wick books will be available in stores that aren't Amazon. The first three, the Wick Chronicles (The Emperor of San Francisco, Ozoo, and Forked) are in distribution as a single volume. Again, look at Books2Read [here] to find the stores it's already in.

We kinda want to do a print version just because the cover is spiffy, but it would wind up being like 830 pages.

Not that we won't...it'll wind up being like thirty bucks, but that's still cheaper than getting them individually. Mostly, we just want one for ourselves. Your best bet is still getting it as a digital book.

Eventually (like, late next month, maybe) the Wick After Dark duo will go wide as a single ebook.

Dunno about the last three. Probably someday, but they just came out so it'll be a while. I mean, they'll get released to as many stores as possible, but maybe not in a single volume for a while. And we're not sure if those three are an entire series or if future books will stay in it or if there'll be a new Wick series title.

In any case, we're taking some time off, because the Younger Human is getting married in a couple of weeks and we're distracted.

I think during that time the Woman and I are going to finish watching The Crown on Netflix.

Cripes. Over a Month.

No idea how I didn't post for over a month. I really thought it was a couple weeks at the most. I suppose I lost track because I was busy taking care of a sick person, but she's mostly better now. But now that she's better I don't have much to do. While I wait on the edits for the newest book I'm dabbling in a bit of poetry again, but there's not much else for an old guy to. 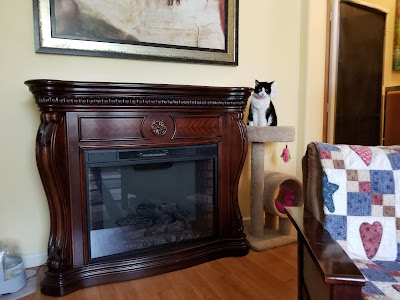 We've had the fake fireplace since we moved in, and I don't think I've ever been on top of it. Buddah gets up there a lot; it's one of his favorite places to lounge, but he has a little bit of arthritis in his hips now and jumping up there isn't as easy. The people noticed he was thinking really hard every time he wanted to go up, and a couple times lately he's almost missed.

Since he's a kitty that likes to be up high, and he gets embarrassed easy, the Woman took this cat tree from near the corner of her desk where it rarely got used, and stuck it by the fake fireplace. So of course I had to investigate.

The problem for me now is I don't have an easy time getting down off that tree. The round thing isn't as big as I need it to be, so the Man is going to build a better step so I can use it, too.