I am NOT playing with the sparkly flying thingy! 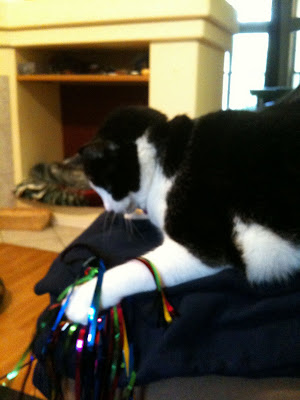 There was lots of real live fresh dead shrimp for my birthday. In fact, there's still some real live fresh dead shrimp in the refrigerator, and I wanted some a little while ago but the Woman was all, "Oh I think that might have gone bad by now. You probably shouldn't eat it," but I was all like, "Well let me sniff it and I'll decide," but then she was all, "No, we need to toss it."

So she closed the refrigerator door, and it's all still in there. 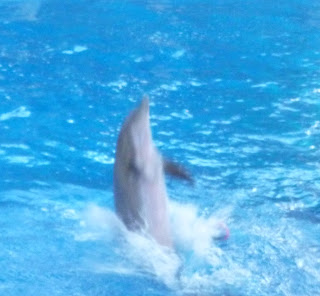 Now, the other day she and the Man went for a long walk at this place that has six flags over it, and apparently it has giant fish, and they took a picture of one.

But did they bring one home for me?

I mean, that looks like a HUGE fish and I would really like to sample one, but they didn't even think about me while they were there. 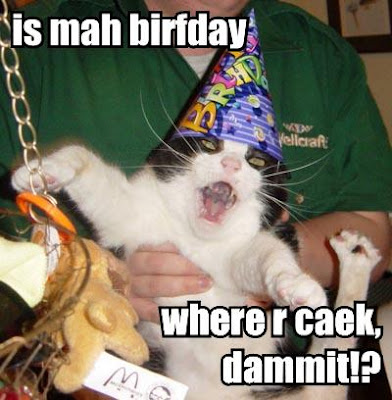 Oh man, I just remembered, my birthday is in 3 days! I'm gonna be ten years old. TEN! That's like...old. But it's a good old...no one expects much of a ten year old cat, but at ten you're still not almost dead.

I think ten shall be a very good year for me.

But there better be real live fresh dead shrimp on Monday.

Keep scrolling until you find something that interests you. I got a few things today...

You guys know the Woman and Jeter's Mom are walking for boobies again this year, right? And Diva Kitty's mom is crewing in THREE walks. The Woman is walking twice, one in San Francisco and one in Atlanta, and is still raising bucks for boobs...she's like $500 away from goal on the first walk and hasn't started doing anything for the second because she just made up her mind about it today.

She's got some awesome prizes this year. Lookit:

To donate to help save the boobies AND to have a chance at winning some awesomeness, go to Rock-the-Pink.com.

And... don't forget about ASK MAX MONDAY at mousebreath! Every Monday I answer your burning questions... Got a question? Just leave it in the comments on my mousebreath! column, or use the link at the top of this page (Ask Ma Anything) and that will send it to my formspring page (though longer questions are best suited for the comments at mousebreath! because Formspring has a limit...)

Oh, and I think the Woman has some really good connections somewhere. This morning, when I was trying to wake her up because I was hungry and she was drooling on her pillow and not getting up to open a can for me, she opened an eye and said, "Do you want to meet Jesus today?"

Well, I said OF COURSE, so when she went outside later I thought she was going to get him, but she came home a few hours later alone. So either he doesn't like her, or she realized the house is too big a mess for company.

Oh man. Doods, you will not believe this. Today, while the Woman was out walking the streets, she saw this:

In a basket on the bike.

And she says the cat liked it!

Now, I have to take her word for it because she didn't get a picture, but based on her description, I think I did a fairly accurate drawing.

She thought it was so cool, a cat riding on a bicycle.

Well, I am stating publicly that she better not be getting any ideas, because if she thinks I am going to happily take a ride on ANY kind of bike and buys a basket for her bike and tries to stick me in it, I will eat her face off.

A little while ago the Woman was in the kitchen, where Buddah was begging for crunchy food, and she looked at the container in which the crunchy food is kept and said, "Oh no, I forgot to go buy you guys the good food."

This caused much excitement, because the good food? It tastes like krap.

"I'll just give you some of the other dry food tonight."