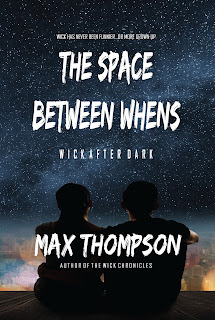 Just in time for the Woman to take time off and do things with the Man for the next 10 days...

So far it's out in two formats: Kindle and paperback, and the paperback is probably only popping up at Amazon so far. The hardback has been uploaded to the printer and distributor, but we haven't seen a proof of it yet, so that may be a couple of weeks.

Eventually we're going to make all the books available on other digital formats (iBooks, Kobo, Nook, etc.) but before that they have to be converted to ePub...and if you have a device that reads ePubs and you want them before that, we can work something out.

Or heck, you can get the Kindle version and use Calibre to covert it yourself. It's pretty easy, and the file doesn't have DRM, because I figure if you bought it, you should be able to put it on all your devices (but don't be a jerk and upload it to a file sharing service because that's just not nice.)

Ideally, to get the most out of this book you should read all three books in the Wick Chronicles, but there's a preface for those who want to jump in with this one.

From the back cover:

Fresh from a time-travel date gone very wrong, Wick reminds the Emperor: the woman he was currently holding hands with had warned him—if she survived the battle with wizards and elves, she was murdering his virginity. Time to pay up, dude. And while Wick prefers to ignore the intimacies in human relationships, he isn’t sure Will can handle the things that Aisha will expect from him and feels responsible for making sure Will doesn’t fall off and break a hip.


Wick acts as guardian of their new relationship, but standing in Will’s way is his mother, who is adamant that he’s courting disaster and risking that Aisha will hear every private thought he’s ever had, and on the sideline is Aisha’s seventeen year old son, Jimmy, who has a monumental secret of his own that takes them to the When of Will’s natural life—and nothing prepares Will for how deeply he identifies with Aisha’s son, and how closely entwined their childhood nightmares are.


"Wick After Dark is a delightful mix of sentiment and laugh-out-loud funny. Max Thompson takes a risk with this one, and it pays off wonderfully." ~Ian Murphy, Murphy’s World


"Max Thompson has gone where no cat has gone before—into grown-up territory, laced with big issues that he tackles with humor and grace. This is the book adult Wick fans have been asking for, and Max definitely delivers." ~ Jo Schotz, I Eight What?

Dang, it's been another month...

I swear, I am not trying to let this blog dissolve into dust and cobwebs. We've been busy with book thingies, getting the edits nailed down and cover made, and we're in the end stretch. For realz--the Kindle version could potentially be available by Monday. The paperback on Amazon by mid-week, and another week or two for the hardback and general-release paperback.

After we get this done...doods, the Woman says we're taking a break to have a Real Life for a bit. The Man is off next week and they want to be able to go and do things without worrying about work things, and I suppose taking some time to recharge is a good thing. This book is #4 in a year. Well, almost a year. We really wanted it to be out by the anniversary of Emperor, but... close enough.

I think most of what the People are going to be doing is walk stuff. They're both walking for boobies in November and need to ramp up how far they can go because the Woman is all I AM NOT MISSING A MILE THIS YEAR and he's all I JUST DON'T WANT TO DIE. And I'm all PLEASE STOP TALKING BECAUSE I'M TRYING TO NAP!

They went to downtown Sacramento last week and walked a lot and even seemed to have a good time. By the end of the day they had 10 miles in and they sure as heck smelled like it.

Now, I don't enjoy the smell too much, but doods, have you ever licked a person who's walked 10 miles? They taste like a potato chip! And I like licking potato chips when I can get away with it. It's not as good as licking Cheetos, but still pretty tasty. If you get a chance, give it a try. It's nothing like licking them on a normal day. That usually tastes like disappointment and crushed dreams.

Okay...back to work, so we can finish this weekend and put an end to the Year of Writing Furiously and get to the Week Where Max Naps While the People Walk.
Posted by Max at 8/19/2017 08:43:00 PM 3 comments:
Newer Posts Older Posts Home
Subscribe to: Posts (Atom)