Oh man. Last night, I was sleeping on the big bed with the fuzzy blanket, and the Woman was sleeping under it (the blanket, not the bed) and the thing that lives in the ceiling said it was time for dinner.

The problem is that it was 4:15 in the morning and no one was cooking. And even the Ceiling Thing didn't seem too impressed, because it yelled kind of pathetically. The Woman was all kinds of pissed off because she'd been sleeping pretty good but only for like an hour and a half.

She got up and went to get a ladder, and dang! She got up there and yanked it out of the ceiling and opened its guts up and ripped stuff out! She's never been that mad at me, but I think I better reconsider my plans to head butt her at 3 in the morning for a while.

She shoved some other stuff in it and jammed it back onto the ceiling, but I think it learned its lesson because it shut up after that.

I think I would have, too.

The People went out today and when they came back, they had steak! For US! Given the sorry state of special treats around here lately, that was like AWESOME!

And it wasn't just a tiny tiny piece, the Woman gave us each pieces that started out about an inch big that she cut into bite sized for us. It was soooo good.

There was also present-opening, hich leads me to think I was not reminded of someone getting old, but really, I got steak so I don't care.

Dusty, The Cat Who Came Before Me

The Woman found this picture while poking through old files. It used to make her sad to see pictures of Dusty because she was not ready for her to go off to the Rainbow Bridge, but this time it made her smile.

You can kinda tell that she didn't feel very well when the picture was taken--it was probably a month or so before she went to the Bridge--but she still posed for the camera.

Dusty was kinda grumpy. I think that's why I like seeing pictures of her. We woulda gotten along just fine...

Gah...tonight the Man and I were actually playing; I was stretched out on the bed with the fuzzy blanket and he was batting at me with his hands and I was batting back with my mighty paws, and after a little bit I jumped into the laundry basket. The Woman dumped a bunch of dirty clothes on top of me, but that didn't stop me. I kept playing with him, biting his hand through wads of her dirty t-shirts. And honestly, I was having fun for once.

And you know what she did? She made him stop! He said he was going to call into work and tell them he couldn't come because he was playing with the cat, and she made him get his stuff and leave! Like passing gas is more important than playing with me!

Last night I stretched out on her pillow and petted her face. I think tonight I'll curl up on her pillow again, but this time I'll let loose with a mighty fart. 'Cause truly, she deserves it.

The Woman is still being selfish and keeping all that Jenny lady's food to herself and not giving me even a tiny bite, so I hocked up a hairball on her bathroom rug. Right where she would step in it if she didn't turn the light on.

Okay so my people decided they were gonna start eating better and they wanted to shed some girth because apparently that gets in the way of things they think are fun but I find just plain disgusting and I don't even wanna go there, really. They decided this before the man had that scare thinking his heart was broken, so they've been eating better for like 5 weeks now.

Kitties...this is not a good thing. The food they eat now? It smells good and all but there's so little of it that they refuse to share! It used to be that if I sat there very politely I would get a tiny taste of whatever they had for dinner unless it was going to make flames shoot out my asterisk, but now? Not a chance. They're =this= close to sticking their faces down and licking their plates clean.

Now every week they go see this person Jenny Craig and she sells them the food they're going to eat all week. Kind of like a crack dealer for fat people. I mean really, they could do crack and get the same results and have a lot more fun, I think, but they seem to like this Jenny person.

But Jenny Craig does not give them enough food to share with the kitties. She gives them these tiny, tiny meals and then makes them eat fruits and vegetables, which I cannot stand. This tells me that Jenny Craig is rude and inconsiderate.

This also tells me something very important: Jenny Craig must be pooped upon.

I just don't know how to get the people to bring her here, where this can be accomplished, instead of going there every week.

But clearly, she must be pooped upon.

This morning, I was really nice to the Woman. I climbed on top of her at 8 o'clock and waited very patiently until it was time for her to wake up. She sleeps later than most people do, because deep down she is lazy, and I can say that because it's not like it's some huge secret. I waited and purred and occasionally petted her face, and when it was time for her to wake up I climbed onto her pillow, put my face right by her ear and said, very gently, WAKE UP I AM HUNGRY!!!

Well, now. You'd think I stabbed her in the eat with a Q-tip or something.

In spite of my niceness she didn't jump up and open my can of Stinky Goodness. No, she feels like she can take the time to visit the giant litter box room, where she takes care of biznezz and drugs up. And just to annoy me now she stands on this thing that says "GET OFF ME YOU'RE FAT."

I think the goal is to stand on it every day until it says, "Well, ok. That's not too bad." But until then she's KILLING it and I don't think it's happy, not at all.

See, she's tormenting EVERYONE in the morning when we'd all be happy if she would just get up and feed me! 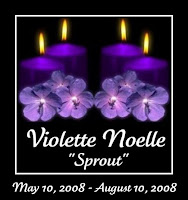 Oh man I love Box Cleaning Day. Not when it just gets scooped, but when the Woman takes it outside and scrubs it and then fills it with brand new litter. There's nothing like being the first kitty to foul a nice clean box.

FINALLY!!! I have crunchy treats!!!

There were seven sheets of paper with everyone's names on them:

It took longer than Women thought to cut the into strips and then fold up and put in the Special Bowl:

Buddah jumped right in to help pick the winner:

And the name he picked out of all the names in the bowl:

I want to catally thank everyone who donated to Save the Boobies, and thank everyone who spread the word. I know some people and kitties wanted to donate but couldn't, but your spreading the word helped a lot. From the bottom of my cold, black, furry heart, thank you.

When the Woman decided to try to get donations to save the boobies and put the netbook up as an offering to the Boobie Gawds, she thought we'd get maybe $200. And that would have been awesome.

But you guys...Dooods...Well, frankly, I have to type this because she just did a final check and you came through in a major way, and now she's all choked up.

It's so major that it would be ranked Brigadier General.

While she was checking the final total she was talking to a friend of hers and told him how much y'all donated, and he said, "Well let's make it a nice round number."

And her friend--he's the guy who's dog Stoner adopted that puppy Tank--he said because Paypal takes fees and stuff that he would make up the difference, and a little more, so that we'll be handing over to Jeter's mom a really nice looking figure for her 3 Day Walk To Save the Boobies.
$1000

Doods! WE RAISED A WHOLE GRAND!!! Do you know how many boobies might be saved with that??? TONS!

First thing tomorrow morning the Woman will print out the donaters list (you're on there as many times as you donated $5) and will cut the names into strips, and we'll draw the winner's name.

I had to get on here and tell you guys how well everything went, because, well, you guys rock.
YOU GUYS ROCK!!!

Come back later to see who the winner is! She should have it up by noon Pacific time.