Good or bad, I wasn't as neglected as expected because the Woman came home a lot earlier than anyone expected, especially her. She drove all the way to San Francisco and checked into a hotel and met some pink people and had dinner with DKM, and then had to come home the next day. She didn't even get to walk for boobies.

Nope, not one step. Apparently she had issues of the litterbox variety, and didn't want to...you know...in front of a thousand other people.

So she came home and made a lap for me, and we watched stuff that she recorded on the DVR. Which for me is a good thing because I like watching TV from her lap. It's nice and warm and squishy, like a lap should be.

The problem was that we watched the last two episodes of Under the Dome, and guys...that was a so-so show with a WTF ending, and it really pissed us both off.

I needed her to make that up to me so tonight we're watching an old episode of Doctor Who, and that is much, much better. It's been so long since I've seen it that I'm all like OMG WHAT'S HAPPENING?!?! and that's exactly how good TV should be.

It's also distracting her from her boobie walk disappointment. I dunno why she's not happy, I mean she gave money for the boobies and it only means she didn't have to walk all those miles and sweat so much, and doods, let me tell you, she doesn't smell good after that.

I will be neglected all weekend. Again.

The Woman, as she does a couple times a year, with intent to throw my routine into chaos, is running off to The Big City to do another of those boobie walks.

For the whole weekend.

While this is all well and good for the boobies, for me it means relying on the Man to open cans, and he doesn't always open them at the right time. AND he skips the late night snack because of "work."

I knew it was coming up when she painted her head all pink again (and I'm really getting tired of that shirt. She wears that shirt all.the.time) but I thought I might have another weekend or so.

She really should consider how this impacts me.

Almost a week ago the People went out in the morning, and when they came back the Woman said she bought something for me...but then didn't give it to me. I spent a lot of time wondering what it was. Food? Toys? Crunchies? WHAT IS IT?

But then she didn't give it to me and I kind of forgot about it, until last night when she unzipped the bag it was in and spread it out. 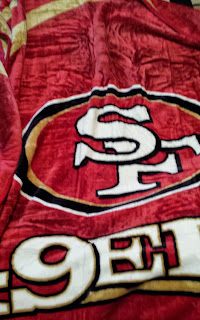 It's a brand new fuzzy blanket to replace the fuzzy blankets that she got rid of because they were too gnarly to clean!

It's going to live in the nook by the fireplace where I like to lounge and nap during winter. I bake by the fire, then go curl up on the fuzzy blanket to snooze for a while, and then get up and do it again.

She put a new bed in there, but I didn't like it as much as I did the fuzzy blanket. The bed is still there, but she folded the new blanket up and set it on top, so I should be nice and comfy.

He thinks he's King of the Pillows 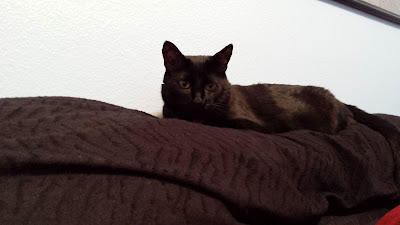 I'm going to let him keep thinking that, because he's getting fur all over them AND he's getting his butt all over them, and at night the Woman has been known to plant her face into them. So it amuses me. But the only royal thing he really is is a pain...
Posted by Max at 9/15/2013 11:16:00 PM 11 comments:

Tonight, I was sitting on the arm of the sofa, enjoying the nice breeze coming in through the open window, when the Woman walked in. This is nothing unusual and I expected her to be there soon, since she had only gotten up a few minutes ago to visit the giant litterbox room, and I was contemplating that upon her return I would sit in her lap and allow her a few minutes of me.

Well. Buddah came in first, and when she followed she reached down and patted him on the head and said, "Hey there, Buddy."

He is LITTLE MAN or SPAZ or even one of those gag me names like SWEETYKINS, but he is NOT Buddy.

I am deeply offended.

Seriously. So I only sat in her lap for like 3 minutes, long enough to roll onto the laptop keyboard and screw up her game of Bookworm.

Ok, once upon a time the people bought a pet stroller with the intent to take me outside. I only have to suffer in it once, because they got it when there were lots of fires north of the area we lived and the air was filled with smoke. They were at least that considerate, and took me back inside...and I think they pretty much forgot we had one (DO NOT remind them...it lives in the rumbly bike room now.)

If they ever try to take me out in it again, I'm doing what this kitty did.

I have a new name tonight

The Woman calls us by all kinds of different names and most of them make me gag because they're so...sweet.

But tonight she bestowed a new one on me, all because I growled at her when she told me I couldn't help Buddah finish his snack.

"Back off, Captain Crankypants. I'm bigger than you are and I'm not letting you take his food."

Tonight while I was looking out the back window and enjoying the nice breeze that was blowing in, the Man and the Woman came into the living room, and she sat down on the sofa--which she never does--and said, "Max, come see!"

So I went and saw and SHE HAD TWINKIES!!!

After she opened the box she let me sniff...holy carp, doods, it smelled like AWESOME and SPIFFY! The only problem was that I could not just reach in and grab one, so I had to rely on her opposable thumbs and hope that she wouldn't rip one open, only let me sniff, and then shove it into her own mouth. 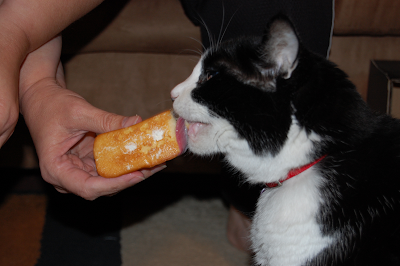 She really did it, guys. She got one, took the plastic skin off, and then ripped it open so that I could get to the silky smooth white guts inside. 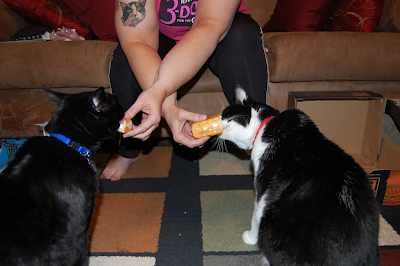 Buddah wandered up to see what was going on and when he did he wanted some, too. And doods, I had no problem with that. There was more than enough Twinkie to go around. Besides, I HAVE A WHOLE BOX. I might even let the Woman have one. 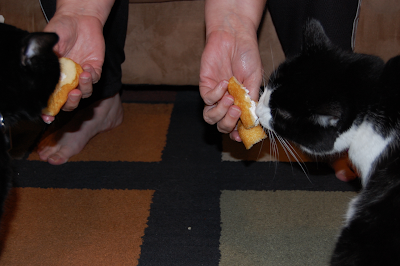 The Woman got smart...she ripped it open the long way so that we could slurp up the innards. Wonderful, creamy innards. 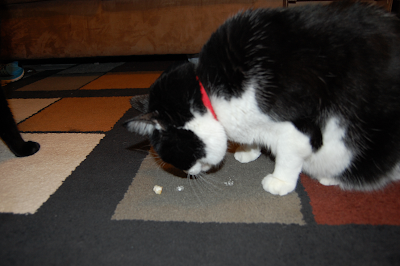 Last bite. We nommed that thing to death.

I'm not sure when I get my next one, but I can be patient. Besides, I saw where the Woman put the box and I can get to it, and since it's now open...let's just say I have no problem with tearing the skin off a Twinkie with my bare teeth. So there might be some hunting going on tonight after the People go to bed.

Word has gotten out, doods

Yep. The world knows I enjoy a really good poop. And that I am discriminating about the litter I use. I've always been a Tidy Cats man, though I've been willing to entertain the idea of another brand. Sometimes (like, not often) I'll use it, most of the time I won't.

But when Tidy Cats emailed and said they wanted me to try one of their new litters, it was a no-brainer. I freaking love Tidy Cats. Now, granted, I was a little skeptical because I really don't want any change to my beloved kitty litter, but I had to try it.

It even came in a special box. 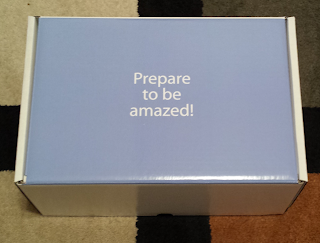 I was. I was prepared to be amazed! 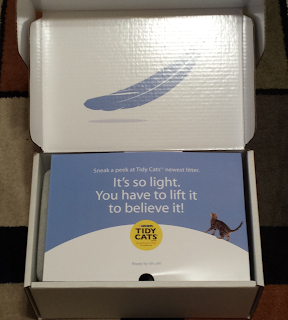 I didn't try to lift it, but the Woman did and she didn't even grunt! 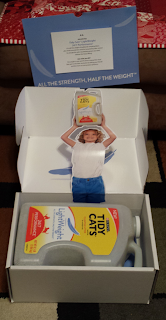 Okay. A sticky person. I wasn't too sure about that. I don't take things from sticky people as a rule, because, you know, they're sticky. And they touch things. Like my tail. I did entertain the idea that perhaps the litter is composed of ground up sticky people, but even I don't think I'd like that. Because...gross. 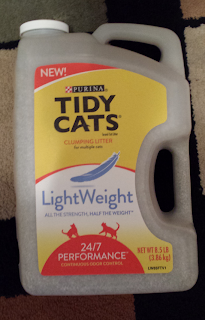 Now, this is the new thing. The container is super lightweight. The whole thing weighed less than 9 pounds, which the Woman says is a spiffy thing when you're hauling those suckers out of the store and then out of the car, and especially when you're trying to pour it into the box with feline help. 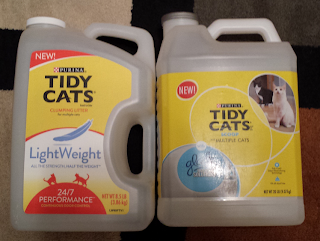 This gives you an idea. The one on the left is the new stuff. On the right, my tried and true Tidy Cats. It weighs 20 pounds, and is only slightly bigger than the lightweight stuff.

Now, lightweight is all well and good, and frankly I'm tired of hearing the Woman whine about having to lift the litter to pour it out and how much her back hurts, but what counts is how it works.

And doods...it works just as well as the stuff I've used all my life. It filled the box the same, it clumps and scoops the same. It's just as good, just not as heavy. So this means no more excuses from the whiny people when it's time to change the litter (and I dunno about you, but I like having all fresh litter a lot more frequently than the people like changing it.)

There was only one drawback to it, and that was the Woman's issue: it's kind of perfumey. She does not breathe well around perfume-type things, and didn't like how it smelled, but she also says it wouldn't stop her from buying it. She'll just hold her breath when pouring it out and she didn't think it was overwhelming after we used it. If your person doesn't have a reactive airway or asthma, the perfuminess probably won't bother them.

She says I'm not helping 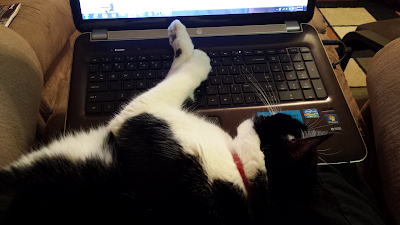 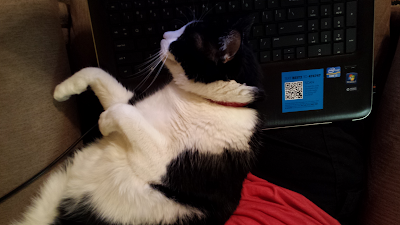 I mean, I'm even scrolling the screen for her.