Oh wow. I was gonna tell you all about what I've been watching out the back window, but that can wait (it has to do with people insanity and taking baths outside...) because dooods! You have to see the artwork thingy Skeezix's Food Lady made for Daisy Mae Maus! 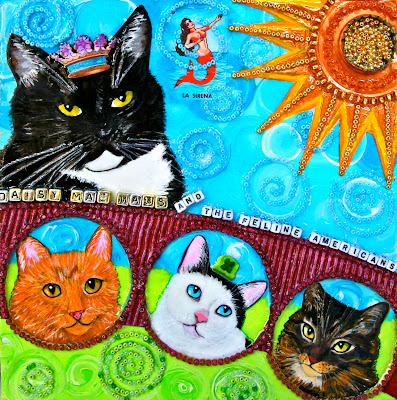 LOOK AT THAT! Isn't that amazing? You can see more of it on Skeez's blog.

But...best thing about it? She's gonna make another one! You could have your face on some very, very special art, just like Daisy Mae (and the Grate Jeter Harris Hizself...) Skeez's Food Lady is trying to help save the boobies, too, and if you donate to her boobie walk, you'll have a shot at getting a custom made art thingy, too. Doods, this is EXKLOOSIVE (I learned to spell that from Skeexiz) kind of art, you can't just saunter into Tarzhet Booteek and get one. You can go to Skeezix's blog and read all about it or just go here to donate. $5 a shot, but $25 gets you six. 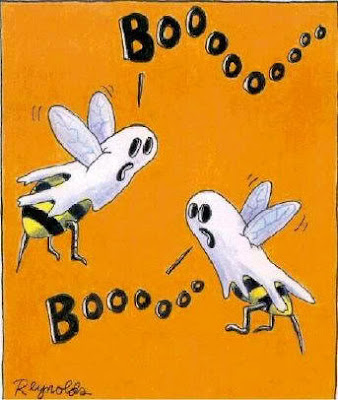 Sometimes a guy just has to watch what's going on outside... 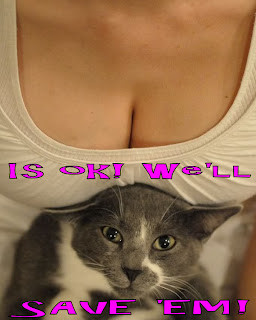 One good thing about all the walking practice the Woman has been doing...since she gets up earlier, I get fed earlier. Sometimes she doesn't feed us before she goes outside to practice, but the Man comes home from passing gas around the same time, and he goes ahead and opens the can since she might be gone all freaking day.

Then on the flip side, I get dinner earlier than I was, too. This meets with my approval.

She says tomorrow she is not going to go outside and practice, so I'm hoping I get some quality lap time. That's been sorely lacking lately...her lap has been woefully unavailable, and I really like napping on it. It's squishy. Not much beats a squishy lap to curl up on.

All right now...the Woman is still practicing her walking, and let me tell you, it's just a massive FAIL. She's not getting any better, that's for sure. She comes home and instead of having a nice smooth gait--which one would rightly expect from all that practicing--she walks like someone shoved a broomstick up her asterisk.

The whole coordinating the feet and legs must be too much for her to handle, because she spent hours at it this weekend, and what'd she have to show for it? Aside from the broomstick being where it didn't belong? She was soaked in sweat--which means it's just too hard for her--and she stuck all this weird sticky stuff to her feet. She says it's called moleskin, but doods, I went online and looked at pictures of moles, and their skin does NOT look like that, and even if it did, it wouldn't belong on her freaking feet! So all that practicing in the sun must be baking those two or three remaining brain cells.

Really, she should just stop. She's never going to get the hang of it, and this getting up early and leaving the house so that I have to wait for the Man to come home and feed me is just annoying the snot out of me.

The Woman likes strawberries and she has them for a snack a lot of the time. It seems like every night it's either strawberries or raspberries, and dang, doods, the strawberries smell really good. So I jump up next to her and she holds one out for me--even if it's the last one--and says "go ahead, you can have a bite," but I never bite it.

I don't get it. Those things smell wicked good, but when I get close it just seems like something I don't want to eat. I keep trying, though...she has one and I want it, she offers and I don't eat it. Go figure.

Oh...and at the risk of being obnoxious--and I apologize for that--now's your chance to maybe win a Kindle e-reader. It's the last prize (for now...there might be something else later but the Woman isn't sure) being offered for donating to the Woman's boobie walk.

Now doods, we have a couple of these in the house, and the People think they're awesome. The Man likes his because it's light and he can carry around these 1000 pages books he enjoys, and the Woman likes it because, well, it's a toy and she's a toy whore. Plus, there are a TON of really cheap GOOD books for it (including MINE!) and I think the people read more now that they have them.

You really want one of these. And I really want to save the boobies. Visit the Woman's training blog at http://awabbitwalking.blogspot.com/ and click on the colorful DONATE FOR A CHANCE TO WIN A PRIZE to toss a few bucks towards the boobies--and every $5 gets you a shot at that Kindle.
Posted by Max at 7/09/2010 08:49:00 PM 17 comments:

Last night I planned on hiding in my mancat cave to get away from all the noise in the neighborhood. you know, the medium sticky people blowing crap up. But...it wasn't too bad. I could hear some boomers going off a few streets over, but it wasn't hide-worthy. so I stayed in the living room with the Woman, and then watched her out the window when she went outside to watch sparklies in the sky.

She stood out there for like fifteen minutes and had to get on her tip toes a few times...whatever floats her boat, I guess. I think she could have seen the same things if she'd stayed inside and pulled a nose hair or two...inside there was cool air coming from the cool air blowing thingies. But no, she stood out there in the hot, and was all proud of herself for thinking of watching from the back yard or something.

Ok, so you guys know the Woman (and Jeter's Mom and Skeezix's Food Lady and DKM) are walking for boobies in October, right? The last couple of mornings the Woman has gotten up really early (well, early for her...she thinks it's the buttcrack of dawn but the rest of the world has been up for at least an hour, maybe two) so she can get outside and practice her walking. Because, obviously, she doesn't have the whole one-foot-in-front-of-the-other thing down pat yet.

So this morning I decided to be helpful. She wants to get outside before it gets hot, so I figured I would help her get up before it got hot outside. I jumped up on the bed, got really close to her ear, and said, “Wake up!”

Well. She jumped like I'd clipped battery cables to her boobs and fired up the car. And then she got really rude and grumbled, “It's three-farking-thirty in the freaking morning, Max!”

Well, yeah...isn't that what she wants? It was cool outside, I'm sure of it.

So I told her to get up and save the boobies, and doods...she pushed me off the bed. I mean, it wasn't like she shoved me so hard she launched me, but even in slo-mo, my asterisk was on the ground.

I jumped back up and thought about giving her what-for, but I've learned that when she gets all rude like that and uses not nice words, it's pointless. So I curled up on the bed beside her pillow, making sure I was close to her face, and then...doods...I did it.

I totally farted in her face.

Doods! The Food Lady is doing an awesome prize thingy for her boob walk. A custom pet portrait! Look at the one she did with the Grate Jeter Harris on it: 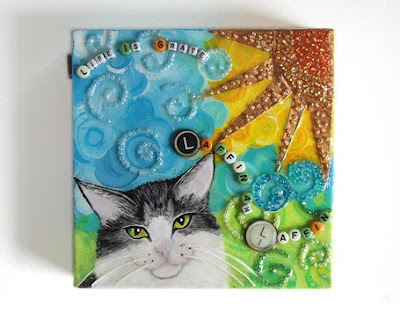