...and not to brag or anything, but it would be a terrific Christmas present for people who are owned by cats. And, you know, of you ordered one NOW, it would get here in plenty of time for the holidays. Amazon lists it as 1-3 weeks, but doods, they order it right from the distributor and the distributor drop ships, so it would probably get there sooner.

I have a couple of other books, too.

This is the book that started me off on my literary stardom trajectory.

You want to give this to people, too.

It's on Amazon, B&N, and other places. Usually on sale.

My second book is only available on Cafepress. Something hiccuped in distribution years ago and while the Woman was sorting it out, she "misplaced" the print file. Someday she'll re-do it, but you can still get it.

The first one is funny.

All of them, you can also get for your e-reader if you have a Kindle app. They're all listed on the Woman's Amazon Author Page. Yeah, they gave her a page. As if she does all her own work...

Thus concludes my annual self pimping. I don't like to do it very often, but once in a while a guy has to remind everyone that he has swag for sale. And mine is BRILLIANT, dangit!

Save me some, dangit!

I was in the back of the house, snoozing on the big bed, and I thought I was dreaming about the Woman letting me lick her little container of caramel that she dips her apple pieces into, but after a minute or so I realized I was almost awake, and I was smelling the caramel. 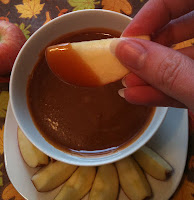 So yeah, I got up and hauled my asterisk down the hallway, because, CARAMEL.

But doods. Doods. You know what she did?

She had already licked that sucker clean! She didn't save me a single lick! And to make it worse, when she saw me she said, "You snooze, you lose, Big Guy."

WELL YEAH I WAS SNOOZING! WAKE ME THE HECK UP!

That was just so rude.

Doods. There was no turkey here for Thanksgiving. Well, no people-made turkey. When I heard there was not going to be a single turkey making in the oven, I was a wee bit upset.

But then, the Woman said she was making Chicken Kiev instead, and I felt a little bit better because, hey, chicken!

But then she said Chicken Kiev is not for kitties because it's loaded with butter and garlic, and garlic is not a good thing to give a kitty.

WHAT KIND OF THANKSGIVING IS THAT?

So I sat back wand watched as the people ate their wonderful-smelling dinner of chicken-Max-can't-have, roasted potatoes and sauteed green beans and buttery biscuits, and I was trying to figure out ways to get even.

Yep, when they were done eating the Woman pulled a piece of chicken out of the microwave. She made an entire piece for me and Buddah, and she cut half of it off and into tiny chunks because apparently we don't chew well enough for big chunks.

"You didn't think I forgot you did I?"

Well, no, I was sure we weren't forgotten. I just thought she was being a royal witch-widda-b about the whole thing and that we were going to get shafted.

Then a little bit later they all had pie, which I was interested in but decided I didn't want after all...and she went to the cupboard where the stinky godness lives, and doods, she got out a can of turkey gooshy food and let us have it TWO HOURS EARLY.

ANNNNND...we get to have some more later!

So this is me, after al the foods tonight: 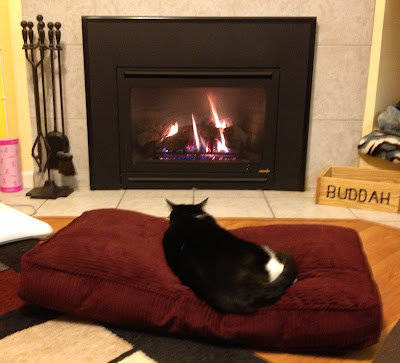 Just waiting for everything to digest, so I can have my real dinner in a little while. 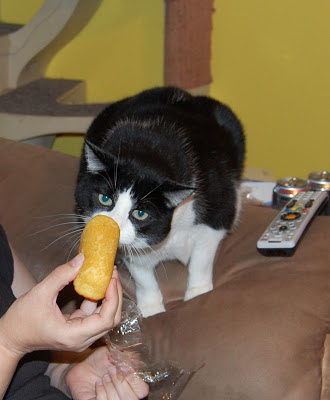 This was probably the last Twinkie I will ever have tasted, and I didn't even know it at the time, and it was over a YEAR ago, and I didn't get enough of it to make the taste last forever! How can they go out of business? I NEED MY TWINKIES! This bites the great big hairy one...
Posted by Max at 11/16/2012 05:27:00 PM 18 comments:

Great, the people are back, but dangit, the Woman brought home cooties, and all she's doing is sitting here coughing and sneezing, which means sitting on her lap is not comfortable at all. As soon as I start to snooze? COUGH SNEEZE SNEEZE SNEEZE COUGH.

On the plus side, she sleeps a lot when she doesn't feel good, so at least there had been some warms during my mid-day nap. She's quite the heater sometimes.

So. The People went to Vegas for some fun and to see things that made them laugh, and I'm pretty sure they spent a lot of money on things but they did NOT bring me home a present. But I'm not too upset, because we got the Grandma while they were gone, and the Grandma is very nice.

They took a lot of pictures, but the Woman is in recovery mode (going places takes a lot out of her, just the suckitude of being her) but when she isn't so tired, she'll let me pick a few to show you.

In the meantime... The Younger Human (they took him along) is gearing up to do his Polar Plunge to raise money for the Special Olympics. He does this every year; he puts on a funny costume and he and his friend raise a lot of money, and then they jump into the cold, cold water. This year, they're dressing up as characters from Super Mario Brothers, and he's going to be Luigi.

If he hits his fundraising goal, he's going as Princess Peach, and there will be pictures to share. Doods, he's like 6'2" and all hairy, so being a princess HAS TO HAPPEN.

Just think...a really spiffy tablet computer, just in time for Christmas! You can give it to yourself, or give it to someone else as a present!

But mostly...I want to see him all dressed up like a princess. 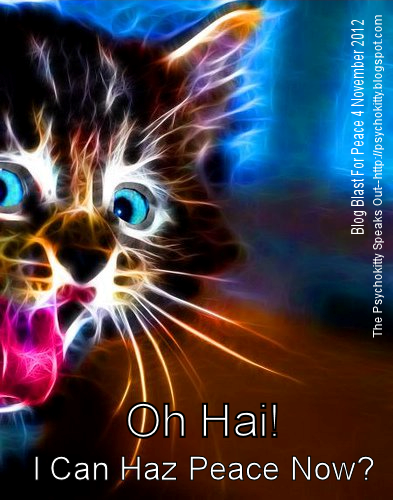 Okay, so last night the people left the front door open (there’s a screen so no kitty can escape) and then turned the fireplace thingy on because they got cold. Now, I’m not complaining about the fire because there’s not much better than baking on one’s left side, then flipping over to bake on the right side. For me, that was a total score.

But then the Woman put a bowl of candy by the door, and I knew I wasn’t going to like what came next, because when that happens what comes next are a bunch of sticky little people ringing the doorbell and begging for handouts.

Little doods out there, just get a freaking job already. Buy your own candy.

I was torn; stay and bake by the fire or go hide in a bedroom. I decided to stay, at least until the second batch of little beggars showed up.

Man, guys, I was by that fire so long that I actually wanted to get away from it for a little while. It took for-freaking-ever for any kids to show up, and when they did they didn’t even ring the doorbell. They just stood there looking like pint sized stoners, hoping someone would notice they were there. Lucky for them, Buddah got about 3 kinds of excited and that made the Woman notice, so she got up and gave them each a couple pieces of candy.

Oddly—I thought it was odd since they didn’t say anything when they got there—they all said Thank You quite nicely.

It was almost a whole other hour before another kid came, and that kid was the last kid. I think the Woman was a little bit disappointed; she only got to give candy to 5 kids, and if a person is going to sit there with cold air coming in the door, they kind of want it to be worth the effort.

Me, I was just happy for mostly quiet, and a nice fire.

Now we just have to wait for Thanksgiving so we can have turkey, and after that… SANTA!