Doods. Shaggy. I am leaking. 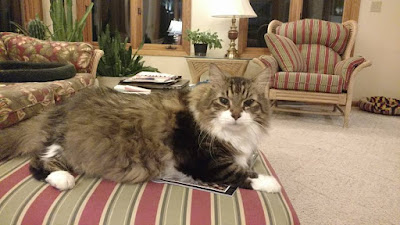 Shaggy decided to head for the Bridge last night while he was sleeping--which is, honestly, how I would like to go when it's time. But man...he was also one of the really early cat bloggers; he and his bro Scooby started Little Cat Feet in 2005, when the cat blogosphere was just a tiny drop of water in a really big pond (their little brother, Scout, joined them in 2006) and having them around was like gaining a couple of furry bros.

No doubt about it, the party that started for Chey ramped up, and now they're celebrating Shaggy's arrival, and I bet Scooby is like 97 kinds of happy to see him. But here, we're hurting. I know his mom is hurting. We're leaking. 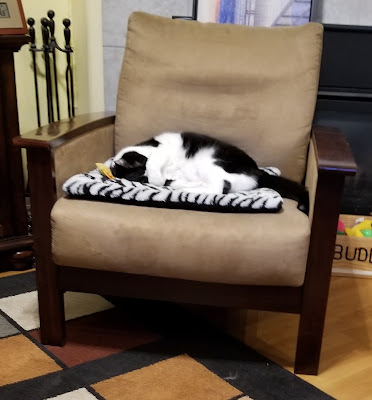 I'm not old enough for some of the things going into the next book. In fact, there are parts the Woman has to write for me, because I have never participated in activities of the bouncy kind, which means I may have to give her a byline. ON THE COVER. But maybe in tiny print, because the rest of it will totally be mine.

And the hardback version of Forked is available now, and I have 10 on hand for those who want pawtographed copies. Just look in the sidebar, just under the picture of the cover. If more than 10 sell, I can get more. I have a few paperback copies, too.

And the biggest thing... 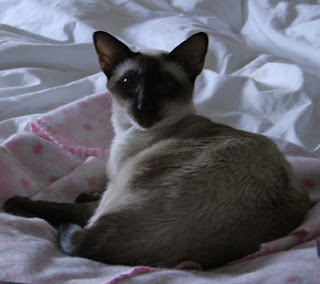 Chey was one of The Originals, the long time cat bloggers, of which few are left. I honestly thought I would go to the Bridge before she did, and when the Woman told me that Chey just hadn't bounced back from how awful she's been feeling lately, my heart just cracked.

Chey was going to change the world. Y'all remember when she and Derby ran for President and VP back in 2008? They totally would have won, if not for speciism. They would have made this world a far, far better place. And now it's a little bit dimmer for not having them here.

I now that sooner rather than later I'll see her and all our other friends that have gone on before us, but for now, I'm going to let myself feel sad. Just for a bit. And then I'll have a snack, something fishy because she loved her fishy flakes, and I'll take a nap.

The chair is still there... 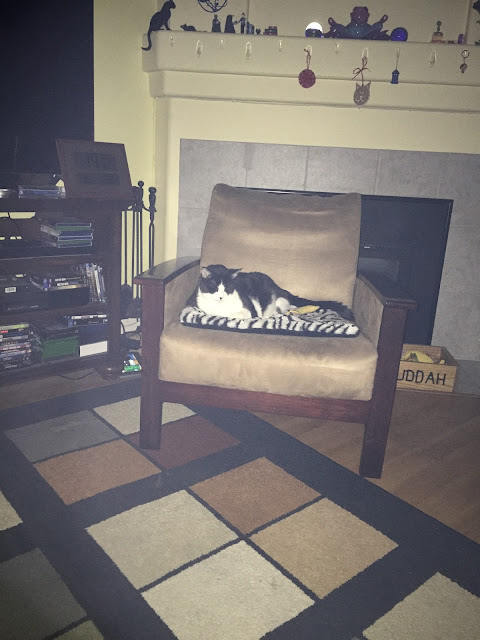 This was taken in the middle of the night. The lights in the living room were off so the Woman used the flash on her phone, which normally ticks me off but didn't bother me too much this time. She says it makes the picture look like an old Polaroid. I think it just looks like I'm sleepy and want her to go away.

* * * * *
Oh, and I looked at Forked on Amazon, and it looks like they linked the less expensive version to the Kindle version, so it's good to go. We'll work on getting paperback editions of the first two books to show up as being sold by Amazon instead of from 3rd party sellers only this week. BUT YOU'VE READ THEM ALREADY, RIGHT??? Of course you have.

The cheapness is coming...

Ok, maybe not cheapness, but cheaper. Amazon is finally carrying the print version of "Forked" but hold off on getting it, because a less expensive edition is coming. We're in the middle of changing the printer and distributor, and the new one lets us bring the price down from $19.95 to $16.95.  'Course, the digital version is only $4.99 (you need a Kindle app to read it....but if you have an e-reader that uses epub documents, I can be persuaded to convert it.)

Over the next month or so, the rest of my books will probably be moved to the new distributor, too. I'm really hoping that they'll then be cheaper, especially my poetry book "There Once Was A Cat From Nantucket," because for as short as it is, it's way too spendy in print (because of the color images...) If it is, the Woman is going to push to have it redesigned, too, so that it's prettier to look at. I deserve pretty, dammit. 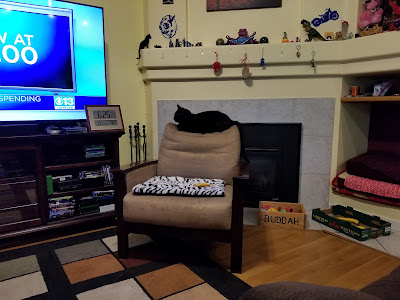 Buddah's gonna watch TV from the back of the chair that hasn't been moved and won't until we get bored with it, and I'm gonna sit on the other side of the room and mock him for his taste in TV. Although right now he's watching the news, and that's hard to mock. Other than he's far more interested in the commercials. THAT I can mock...
Posted by Max at 5/04/2017 06:29:00 PM 2 comments:

Yes, those are Christmas ornaments

"Dood," the message in my FB PMs read, "are those CHRISTMAS things still by your fireplace? And a T-rex with a TARDIS in its mouth? Dood, the holidays were over 4 moths ago."

Yes, dood, those are ornaments. They were made by Kimo & Sabi's sticky person, Kiera, and I don't want to take them down because they're awesome and they make me happy. I mean LOOK. She made a red one, which is my favorite color, and a cat face, and cats are awesome, and she made me a tiny TARDIS! So yeah, they're gonna hang there until next Christmas, most likely.

The T-Rex is the Woman's. She thinks it's funny, because in the first episode of Doctor Who with Peter Capaldi as the Doctor, a T-Rex spit the TARDIS out. It's stupid and it makes her happy, so why not? Heck, the little keychains? Those are Doctor Who keychains, too.

Oh and in the big picture (post below this one) you see the chair behind the Younger Human? That normally isn't there, it's usually in the library. The Man put it there so there would be enough sitting places, and since I liked it there, it's staying for a few more days. Because it makes me happy.

Doods, things that don't make you happy aren't worth keeping where you see them every single day. This stuff makes us happy, so it stays.

I'm not too sure about that frog, though.

Look who came to see me yesterday! 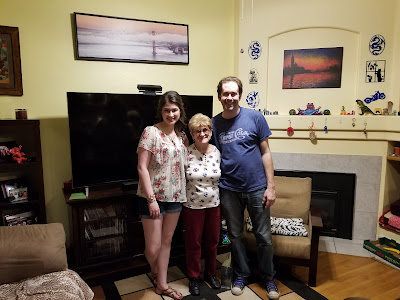 The Grandma, the Younger Human, and his Significantly Significant Other Half. I wasn't especially sociable because no one was offering me anything to eat which upset me, but I was still happy to see them. They all went out to eat and when they came back the Woman smelled like Red Stupid Drinks and she brought back steak for me, so it was a really great night for me. It was a good night for the Woman, too, because she had dinner with her favorite people...and had lots to drink.
Posted by Max at 5/02/2017 04:55:00 PM 4 comments:
Newer Posts Older Posts Home
Subscribe to: Posts (Atom)