"Max, dood, why don't you just release the Wick novella before the next Wick After Dark book?"


I get that not everyone wants to read the more adult stories of the Wick After Dark series, but I can't release the novella until after the upcoming WAD book simply because of spoilers. Also, it's not finished, whereas the next WAD book basically is. It goes to the editor this week, then one more pass and it goes to proofing.

It won't be much longer before The When of Wick (working title) is released. And if we tighten up some of the loose ends, you should be able to jump into that and not be too lost. You'll have missed a great love story and getting to know Jay, who used to be Jimmy, and you'll miss out on Will dealing with his childhood bully, but those aren't going to be critical things to reading The When of Wick.

And yeah, there's nothing graphic in the next one. It's kind of a quiet story, it's made us laugh out loud a lot, and doods...there's a wedding.

You don't want to miss that. 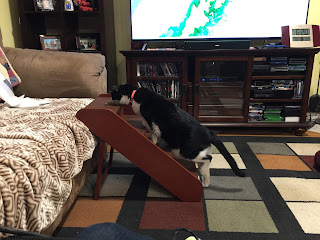 The Woman bought me these steps to make it easier to get onto the sofa. Now, I don't NEED steps, but she bought them anyway because I MIGHT need them someday.

Well, ok. Nothing like jumping the gun there, eh?

The Man tried enticing me to use them by putting treats on each step, and this is as far as I got before going back to the floor and then jumping onto the sofa to get the treat on the stop step.

I suppose it'll be good for stretching, if they keep putting treats on it.

The People were gone for a couple of days, and once they got home the Woman and I got back to work. We're *almost* ready to send the next book to the editor. It doesn't have a title yet, but Wick, You Little $hit is a possibility. (Ok, not, not really...it's a Wick After Dark book but I think that's pushing it.) I laughed *a lot* while working on this one.

While the editor has this book, we'll work on finishing the short story we were working on. The short that turned into a novella. I'm super excited about that one. The When of Wick. This one won't be a WAD book, but goes into the Wick Chronicles series. So if you didn't want to read the more adult natured WAD (though they're not GRAPHIC, it's the f-bombs that tip the scale, and even then...you should read them, you really should. Unless you're, like, 10 [looking at you, Tad]), you can jump into this one and I don't think you'll get lost. We'll kinda cover the bases.

The Wick Chronicle has been taken out of the Young Adult genre, at least the BISAC codes have been changed. But they're still ok for kids. 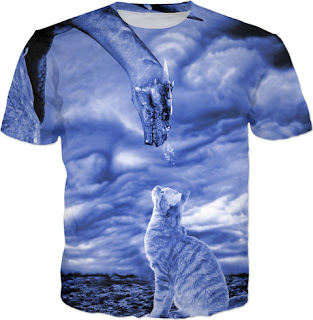 Something else we've been playing with: t-shirts.  She wanted a t-shirt with the cover to Forked on it, and long story short, we have a storefront at Rage On.

Right now there are only 4 shirts, each a book cover, but we'll slowly expand it. There might even be one or two with yours truly.

It's more than shirts, too. Like, sweatshirts or pillows or shower curtains...

The ultra premium print all over are the best value, the Woman thinks, because they're nice and soft and last freaking forever. She's got, like, 40-50 shirts from Rage On and none of them have faded. Like, at all.

She's not sure how the Ozoo shirt will look. It's different on the front and back, but she ordered one for herself to check it out. If it sucks, she'll redo it. But she got the Jeff and Fluffy shirt and doods, it came out amazing.

It's my vacation, too! 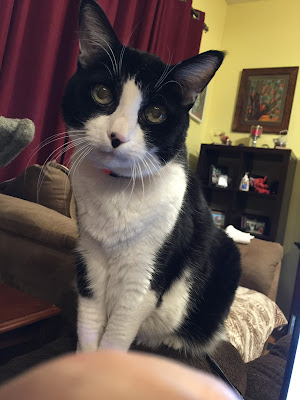 The Woman and I have been working a lot lately, long days with lots of hours spent typing and consulting and pouring over notes. We got the first draft of the next Wick After Dark book done and set it aside to let it simmer, because it's super long and we know we need to trim it down a bit, but it's hard to cut fun stuff that quickly.

Then we started a Wick short story, which wound up more like a novella, and we finished it just in time for the People to take a quick trip to Disneyland. While they play, the Younger Human is taking care of Buddah and me, and since we've done a lot of writing lately, I get to take a break, too.

So them leaving is my vacation, too. I'm going to spend it napping a lot. And when my naps are over, I'm going to stretch, turn around, and go to sleep.

The Woman turned the fireplace on at 7:30. 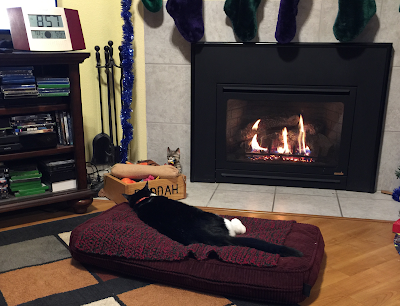 I'm not moving until it's snack o'clock.

And yes, the Christmas stuff is still up. Well, the inside stuff. The outside decorations came down a few days ago.

No hurry. The tree makes for a nice cover for my mancat cave thingy, so I'd like to keep it up for a while longer. Like, until 2019. 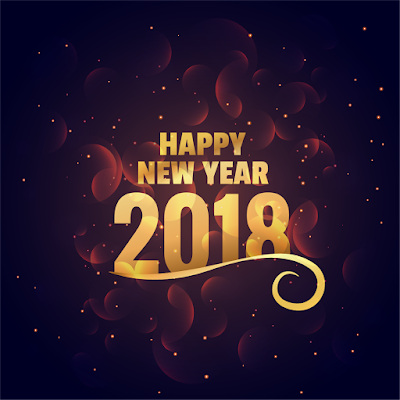