I was as unhappy as I look

Look at this. Look closely. 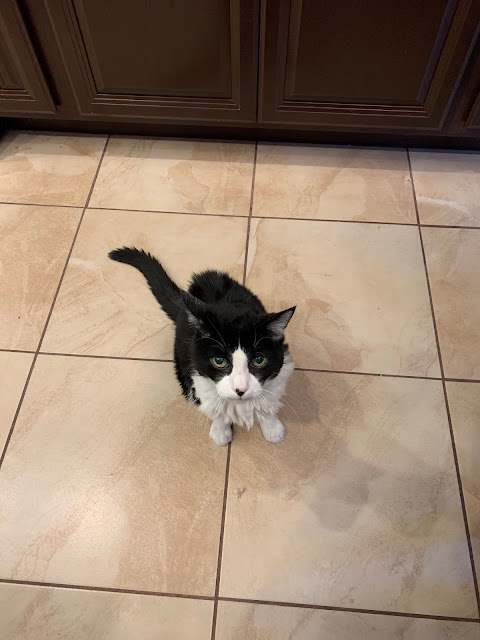 That's how small the bite of chicken I was offered was. TOO SMALL TO SEE.

I was not amused.

Also, the Woman needs to mop that floor because it's gross and I don't want to eat off it.

In other news, she's threatening to wash my tail because there's something on the top, but I've been devious and cunning and have managed to thwart her attempts so far. Tonight there was a fresh real live fresh dead steak for me and I suspect she was going to try when I was happy and full of meaty bites, but as soon as I was done eating it I hid in a closet, so here we are at 10:30 at night and she still hasn't done it, so I think I'm safe until tomorrow.

The people have joined the Quarantine Baking Club and have made bread a couple of times. The Younger Human has also brought them bread a couple of times. Now, they enjoy fresh bread like this nice and warm, with lots of butter on it.
I quite enjoy fresh, warm bread with lots of butter on it. I don't eat the bread, but I lick the everloving FORK out of that bread. So tonight after the Woman enjoyed some fresh, warm bread, she set the plate on the floor for me. And DOODS! It was amazing!
IT WAS BUTTERPALOOZA!
Buddah didn't get a plate, but he got to lick the butter knife, which is just as good.
Where has Quarantine Baking been all my life???
Posted by Max at 5/12/2020 11:01:00 PM 6 comments:

Ok, so I made sure the people had a little adventure today. And it was a spendy one, I heard the Man say, "well over four hundred" when the Woman asked him how much it had cost (they were not really complaining.)
Here's the thing. They took a bike ride this afternoon, and when the Woman got back (she was first, which tells me she's speedier) she came looking for me to offer to get lunch, and found me in my bedroom, on the floor (which is unusual because I prefer my sofas.) I was also drooling and panting. So she yelled at her phone I NEED YOU TO GET HOME and then the Man was there, and next thing I know I'm off to the stabby place.

It was so sudden I didn't even have the chance to tell them what had happened, and since they were too rude to ask, I decided I wasn't telling.

Next thing I know, someone that is NOT the Man or the Woman grabbed my PTU and rushed me inside--and they made the People wait OUTSIDE--and then it was all poking and prodding and "Well, he's not doing it now" and they discussed what to do. Someone left for a few minutes and when she came back she announced that the Woman had actually taken video of me while I was panting and drooling, and she'd seen it and yes I was, so the stabby lady went outside to look at it, and apparently agreed that yep, they weren't exaggerating. And then I heard her say that the Woman was all, I don't care what the tests and x-rays cost, do it.

So they did it.

And then they held me down and took a picture of my insides.

When all was said and done...my blood looked pretty good for a 19 year old guy with thyroid and kidney issues, and my chest showed no heart issues or fluid or anything. The stabby lady thought perhaps it was stress...at which the People looked at each other and growled Buddah.

I got to come home and now I'm acting fine, and the Woman changed all the Feliway containers just in case. And there's talk about separating us when they're not home, because Buddah really is a jerk sometimes.

The important thing is that the stabby lady said that for a guy may age with my issues, I look pretty damned good. She was even surprised that I am only just now at stage 2 kidney disease with my thyroid problems. And even that hasn't changed much, that hadn't changed since my last checkup. I have lost more weight, but not as much as the Woman thought, only 1.5 pounds since last year.

BUT I'M OKAY. I'm not sure the People are because I heard the Woman say that she honestly thought I would not make it to the vet and I'm pretty sure she was making peace with the idea of what had to happen if I did...but why would I make it that easy on them?

...but we have some Fancy Feast dry food and the Woman has been sneaking it to me when he's sleeping.

(She's not trying to be mean...it makes him throw up but it's one thing she knows I'll happily eat and I'm down to 10.3 pounds, so I get what I want.)