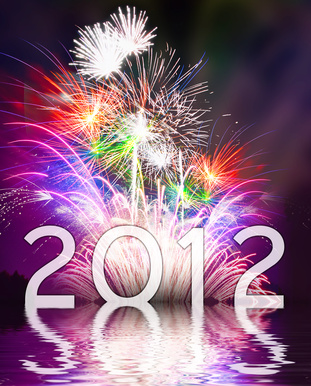 Oh man, I knew Santa would come through! He got us a couple of really sweet things!

First..an awesome 'Nip stash. These things are PACKED with some really awesome nip. And the long ones are great for grabbing and bunny kicking while you put the bitey on it. The Woman thinks they'll last a long time, too, which is good since we kinda kill nip things all the time.

He brought us a new tower! It's shorter than our other big one, but the thingies are big enough for us to curl up on, and a lot of towers have too-small thingies, so this really rocks. Buddah seems to really like it and has spent more time on it, but that's all right. I'll get around to it.

So the PEOPLE didn't out anything under the tree for us, but our friend Kris, with her kids Kasia and Bug, and her man-thingy Tim, THEY got us a BUNCH of toys!

That calendar thingie has a toy in EVERY SINGLE POCKET! Doods, we've got enough toys to last All.Freaking.Year.

The People didn't forget about us, after all. Tonight I was in the kitchen while the Woman was getting a bubbly drink and I peeked in the fridge, and doods, there's a big thing of REAL LIVE FRESH DEAD SHRIMP!

She saw me looking and she said, "Yep, Big Guy, that's for you. I'm sorry we forgot about it earlier, but we got caught up in things..."

And that was ok because the Younger Human was here so that was exciting. And the Woman doesn't like touching shrimpy things, so the Man will give me some for breakfast. So I have something more to look forward to!

I hope everyone else had as awesome a day as I did. It wasn't even really about the stuff...I just liked having ALL my people here (and I even growled at the Younger Human once, but to be fair he WAS trying to touch my tummy....) And just think, the new year is almost here and we get to party it in!
Posted by Max at 12/26/2011 12:02:00 AM 15 comments: 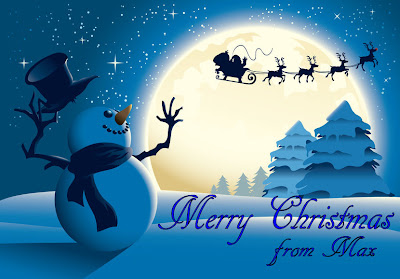 After being told over and over that this year there would be no Christmas tree in the house because my People are FREAKS and put a sofa where the tree SHOULD go and there's Dammit Equipment in the other place where a tree could go, guess what the People did? 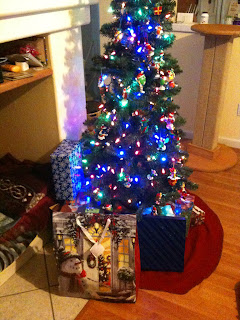 The only way this happened, as I understand it, is because the Woman looked at the family room and where my mancat lounge is, and thought that a small tree would fit right next to it, and still give me plenty of room to get to my personal space.

So they went to Walmart and found this skinny thing. It's really narrow and is only 6 feet tall, but hey, we have a tree, so I have no complaints.

Plus, there are TONS of plastic M&M ornaments on it, which means I can play with them as much as I want.

Now, you see all the stuff UNDER the tree?

What's a Christmas tree without presents? Very spiffy looking and all, but look at this: 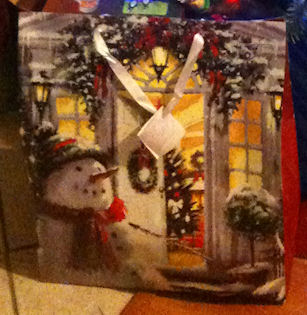 It's a HUGE present.

And you know what name is on it?

BUTTERS! It's for that damned dog Butters!

You know how many presents have MY name on them?

Yeah, I know I was all Oh I don't want anything because I want the money that they would have spent on me to go to shelter kitties, and that's still true, but COME ON. This is an insult!

What the heck could a DOG need that would fit in a bag that big?

Man, I hope Santa comes through for me, and makes whatever that damned dog Butters got look like carp.

All right. So the People didn't forget about me while they were cavorting around Disneyland like a couple of 14 year olds. However, I should have been more specific. When I asked them to bring me home That Mouse, this was not what I had in mind: 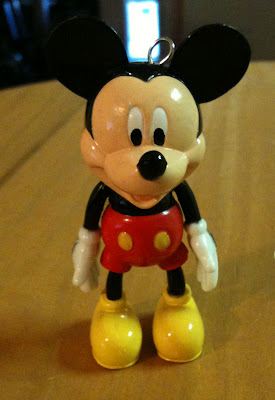 Seriously?
I can't eat that!

And look...it has a metal loop in its head! If I eat that, I'll get a tummy ache! And the whole thing...it just tastes all plasticky.

People, I am disappoint.

In other news, Buddah doesn't fit in that box with his name on it. Oh, he can sit, but he can't curl up in it, which is what he wants to do. So overall, it's kind of funny now, watching him try to puzzle it out.

Look at this.
LOOK AT THIS! 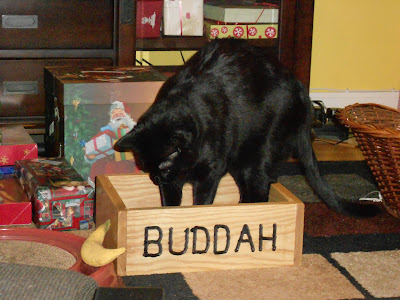 The People went to Disneyland and brought back all kids of bags, bags that I tried to dig through to see if they got me a present, bags they said to get out of, they'd give me my thing sooner or later. So I left the bags alone and have been waiting PATIENTLY, but what does the Man do?

He gives Buddah a new box.

A box with his name on it!

Where's my freaking box? I was GOOD while they were gone, you'd think I'd get something out of it.

The Younger Human has been taking care of us, and you know what that meant?

This is my Younger Human: 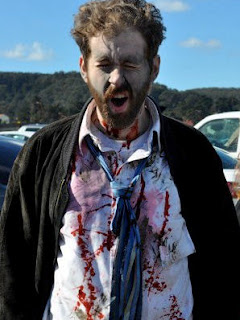 I think he was having a hard day when this picture was taken. Probably girl trouble or something like that.

He came over tonight, and doods, he has it right. There was pizza, and you know what?

I didn't even have to ask! He left some cheese and pizza sauce and grease on his plate, and then put it on the floor for me!

The People? They always make me ask! They have really good stuff for their dinners and won't give me any unless I'm both good AND say please, but him? He just gave it to me!

Clearly, this called for some concession on my part.

So I let him pick me up.

And  left him hold me.

Do I look annoyed? Do I? 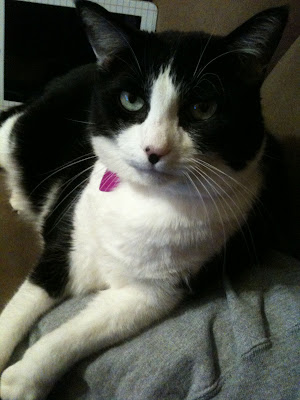 Tonight I was lounging on the foot stool, waiting patiently for the clock to say It's Time To Feed Max, and you know what the Woman did? Do you?

She didn't look and tried to put her feet on the foot stool and CLONKED ME IN THE HEAD!

She nudged me in the side with her giant other foot!

You'd think that would be enough to make her feel bad enough to get up and feed me early, but no. I was all ouchy and she was just, "Oh, sorry, I didn't know you were there."

Once in a while, Buddah has a good idea. And by good idea I mean sometimes he makes a worthy attempt to frustrate and annoy the People.

This was him yesterday morning: 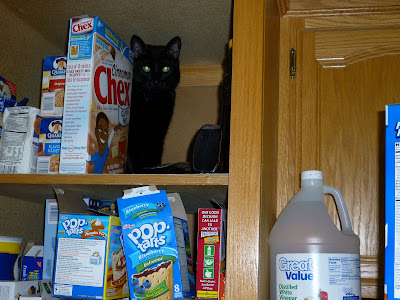 He was fast about it, too. The Woman got out a box of cereal and while she was putting some in a bowl he jumped onto the counter, then onto the fridge, and crawled in there before she could stop him.

She turned around and asked him what he thought he was doing, but all he did to answer was to get deeper into the pantry, where there was no way she could reach him without getting something to stand on. I could see the Hehehehehe in his eyes, knowing what a pain it was going to be, because the standing-on-thingy is in the back of the house right now, in her office where she took it when she thought I needed help getting off the closet.

It was a worthy attempt on his part, but all the Woman did was take her bowl to the table to eat her cereal and look at the paper. He stayed in there, thinking when she was done eating she would get him out, but she didn't. She took a picture of him (I think to show Santa how rotten he is) and then she went into the room with the fireplace thingy and sat down, telling him that it was probably pointless to ask him to close the pantry door when he was done in there.

Man, was he disappointed. It was no fun anymore, so he got out and sat on the fridge, and tried to vent a few complaints about how not fun she was, but she just looked over her shoulder and said, "I see, you're out. Good boy. I'll close it in a minute."

I don't know what I liked more, that he thought of it and tried to tick her off, or that it backfired and she disappointed him by not caring that he was in the place where the crappy breakfast food lives.

Oh, and I want a taste of one of those PopTart thingies. She says I can't have any because it's not for kitties, and barely even for people. But still...I want to at least taste it.

Hey, look what the People got me.
A new chair! 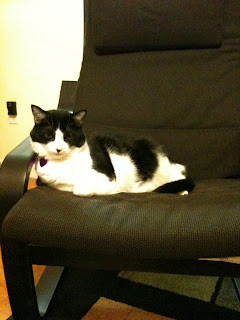