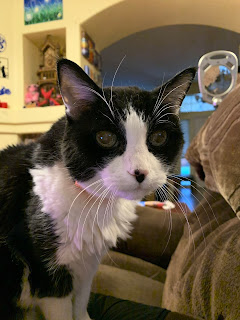 ...I haven't blogged all year.

But, just so you know, I'm still plugging along.

The Woman posted this picture of me on Facebook the other day and someone commented that I'm starting to look my age. Which, truthfully, I am.

The Woman sometimes calls me her Raggedy Man, which isn't an insult. Amy on Doctor who called the 11th Doctor that a lot, and I don't mind being compared to him.

I am a little raggedy. The Woman brushes my furs--I'm finally letting her after all these years--but they pop right back out. And that's cool. It's not like I need to be perfectly groomed to go see the Queen or anything.

The main thing is I'm here, I'm doing well, I eat a lot for someone my age, and I can still be annoying when I want to be.

I'll try to do better at the blogging thing, but I think I've said that before. There's not a lot to talk about when not much is going on. We've been in this house for 11 years now, and there are still no sticky people to watch play outside. Not much of anything, really. Even the freaking scrub jay that used to torment us hasn't been around in a while.

I don't really mind that last thing. He was annoying as chit.

Oh. There was the Great Ant Invasion a couple months ago. They came pouring out of an outlet behind the TV, streamed up the wall, across the ceiling, and then down another wall into the kitchen, causing the Woman to say a whole bunch of things off the Bad Word List. It was great fun, right up until the point where Buddah and I were unceremoniously locked in the back of the house so they could commit heinous acts of insecticide. By the time we were let out, hours later, the ants were all gone and the people not as upset.

On the upside, we got fed extra that day.