I like my routine. I know it well, and I like it when things go the way they're supposed to go.

Like every morning, I know the order of things.

It's an 8 step process. It's simple. She should have it memorized by now. But no...once in a while she screws up the order of things, and I have to stop to think what should come next.

Like, this morning? I made sure she woke up, but instead of going into the bathroom she went ahead and out her clothes on. Well, after clothes comes herding her into the kitchen, so I started down the hall but then she went into the bathroom. So I went in and headed for the giant litter box but no, so took her drugs. So I jumped up on the counter thinking she would stand on the Dammit Box, but then she went to the giant litter box.

Man, I didn't know what to expect after that, so when she opened the bathroom door I didn't trust where she would wind up she I just kind of stood there in the hallway and waited.

The people had the last week "off" which makes a kitty think that there will be plenty of blogging being done because HEY the people are OFF and that means HOME, with a computer turned on.

Apparently "off" means out riding rumbly bikes. And "off" means that when at home, watching 16 zillion episodes of Doctor Who.

(BTW I want a TARDIS for Christmas. Not that I was watching, too...)

It was so bad, my lack of computer time, that when I went to read my friends' blogs, there were over 400 posts stacked up in Google Reader. FOUR HUNDRED!

Clearly, I am neglected. 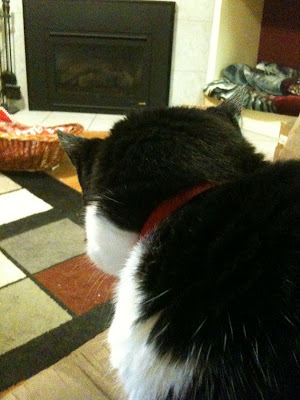 Doods...heads up. Ask Max Anything is not a dead entity. You can still submit questions to it, but from now on I'll be answering them over at mousebreath! in my new Ask Max Monday column.

There I was, minding my own business, napping quietly in the office chair--which is surprisingly comfortable given how squished it gets by the Woman's giant asterisk on a regular basis--and was deep asleep, dreaming about giant cans of tuna that--dooods!--open on request. No thumbs needed!

I mean, this was an awesome dream and just as I was about to dive face first into some premium albacore stored in water, the Women PUNCHED ME IN THE CHEST!

Oh, she says she barely touched me, but I'm no fool. I know what a good shock feels like. I think I jumped like 5 feet.

I swear, it was like she KNEW what I was dreaming about and did it just to keep me from enjoying it.

It's Ask Max Monday over at mousebreath! Today's question comes from Tripper, who has a bit of a Klingon issue.

Stop looking at the freaking TV and pay attention to me! 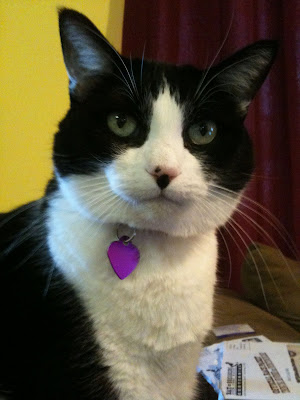