Doods, I am sad, but also kinda celebrating 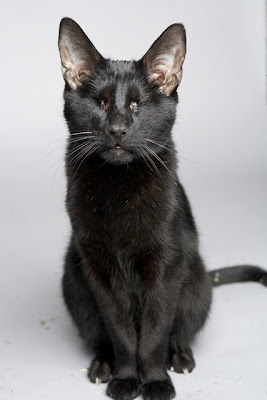 This dood.
Homer the Blind Wondercat.

I never met him and I doubt he knew I existed, but I admired the frak out of him, and I am very sad to hear that on Wednesday his people had to help him to the Bridge. It wasn't exactly unexpected because he'd been declining a bit lately, but still. Knowing the world is without one of the coolest cats ever bites a bit.

If you haven't read his book yet--well, the book about him--you really need to. The things this guy lived through and the things he did (like 9-11, and chasing a freaking burglar out of the house. A FREAKING BURGLAR!) are just a testament to his awesomeness.

And deep down I think that just by being himself, and that his people were generous enough to share his story, he made life a little easier for a whole lot of black cats that might have been overlooked in shelters but people who read about him decided black cats were all right after all, and he for sure made more people sit up and take notice of the fact that just because a kitty is blind that doesn't mean he needs to be put down.

His life was testament to the wonder of blind kitties and the natural abilities they can have, and their deserved place in this world. His story surely saved a lot of furry little lives.

Homer, my man, thanks for all you did in this world. I hope that when I get there, I can give you a hearty paw-bump and a totally manly hug, because I admire the snot out of you.

I defy you to not watch this guy for a full minute...

Mean is frying up a giant pan full of sausage for pizza and telling the kitty, "No, not yours." Mean is putting it on a plate covered with paper towels to soak up the grease and taking a piece for yourself, and then telling the kitty, "Sorry bud, you can't have any."

Mean is sticking that plate in the microwave so the kitty has NO CHANCE to get a bit while it sits on the counter to cool.

Why are you not worshiping me? 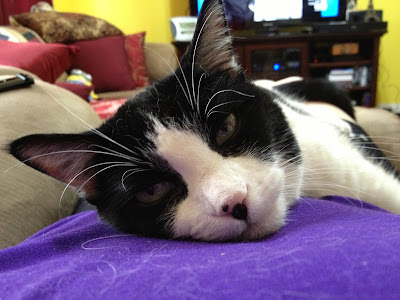 If I counted right, that means the Island Cats will get the chance to try World's Best Cat Litter!

Doods, drop me a note at psychokitty at gmail dot com with your shipping address, or send me a PM at Facebook. I'll pass your address on to the WBCL people and they'll send you some!
Posted by Max at 8/03/2013 09:57:00 PM 9 comments:

I got to try some litter for free!

Yep, the doods at World’s Best Cat  Litter emailed with an offer to give some of their litter a try; at first I was like, Ummmmmm, because I’ve tried new litters before and it hasn’t gone well, but after some consideration I decided what the heck. Why not? And there was always the chance that even if I didn’t like it, Buddah would.

So once the litter arrived, the Woman dutifully mixed a little in with my normal litter; it was good timing because that was right about the time the People decided I needed a way bigger box to accommodate my incredible quantity of awesome, so she the old box with the mixed litter close to the new box with my regular litter.

Well. You can kind of guess how it went. I do not like change, not at all. So here I was with my old box with new stuff in it, and the old stuff in a new box, and doods, WHERE WAS I GOING TO PEE? I wanted my old box with my old litter in the usual spot where I would probably wind up with my butt hanging over the edge of the box and peeing on the floor THE WAY GOD INTENDED.

I did not know what to do*, and the Woman was all, “Oh just pick one” and Buddah was like “Wheeee!” because he’s not always all there, you know.

He freaking PLAYED with the new litter at first. Don’t ask me why, I have no idea. But after he decided it wasn’t the World’s Best TOY he decided to pee in it. And then he declared it Perfectly Acceptable, though there was a little disappointment in that he didn’t track it all through the house after he got out.

Yeah, it doesn’t dust up in an aromatic cloud of Eau de Litter the way we wanted.

Well…I couldn’t let Buddah Pest have all the glory. While I was using the new box and found it quite roomy, I decided I better give the World’s Best Litter a fair shake...so when I thought no one was looking, I climbed into the old little box and gave it a whiz. But…it turned out someone was looking and the Man totally caught me using it.

And then I used it again.

Doods, this litter is pretty freaking sweet. I mean, it’s not perfect. I enjoy tracking my litter out of the box and leaving piles of it in the laundry room, up the hall, and then on the coffee table or fake fireplace where I go the wipe the last of it off my feet. This not only assures I have clean tootsies, but it gives the Woman something to complain about and then clean up. And trust me, people love to be needed, and cleaning up after me? She needs that. She even says so while she’s doing it. “Oh thanks, like I needed to get up and wipe your paw prints up.”

In the box, the litter works just fine. I even managed a good, hard power-whiz and it didn’t break into tiny flacks that splattered up onto the wall. Trust me, I tried. It just clumped the way litter should clump, and when the Woman went to scoop she said it cleans out of the box really easy. And easy is important when your people are basically lazy. Which means…most people need it to be easy.

One of the things I worried about when I said I would try it was the smell. The Woman has scent-induced reactive airway issues; perfumes and the like make her cough, and then make it hard for her to breath, so this was a concern. After all, it does me no good if she ends up passing out because she can’t breathe. She passes out, and there’s no one there to open cans of gooshy food for me until the Man wakes up. But this stuff doesn’t have a really strong odor, even after some Max-sized deposits are made onto it.

All in all, I give it two paws up.

Now here’s the thing you might like. I can have them send a bag to someone. So the fair way to do it is for you to leave a comment—it can be about anything, say you want to win, or you think I’m pretty; anything nice—and on Saturday I’ll count the number of comments and run the numbers through a random generator; whoever’s comment falls under the generated number will win a bag of World’s Best Kitty Litter. Be sure I’ll be able to contact you to get your snail mail address, and that you’re cool with me passing it on to the Litter People.