As of this morning, the biggest fire that was burning not too far from us was declared contained. That was a long time and a lot of land burned up. A lot of homes and businesses lost. Animals and people, too. It's still dry as fark out here, and hotter than normal, so paws crossed it doesn't happen again.

Ok, it took me a while, mostly because I've been feeling lazy, but there's a link in the sidebar now for getting pawtographed copies of The Space Between Whens. If you don't count the shipping costs, it's a little cheaper getting it from me. If you do count them, eh, the pawtograph makes it worth it, right? RIGHT?

The people are gearing up for this year's Boobie Walk. For realz, they're both doing it this year. THE MAN IS GOING TO WALK! They've been riding their bikes for training a lot, the Woman says it's good cardio, but she knows her feet aren't ready for the actual walking part. She's not worried about it because she knows what to expect and says as long as she manages her electrolytes well, she'll be fine.

She doesn't want to get sick again. It's happened on a couple of walks, but she's pretty sure she knows what the real issue was, and just has to accept that on Day 2 she's going to feel like crap, and has to push through it until she feels better. This seems to involve copious amounts of Starbuck's tea, so there better be a lot of those along the way.

I really should have bought stock in Starbucks years ago. I'd be a thousandair by now.

Don't worry about us while they're gone. Y'all know Diva Kitty's mom, right? Her niece is going to watch us and feed us. I might hide under the bed for a couple of days but I'll sneak out to eat food when she's not looking, and then when she least expects it, =BOOM= Psychokitty in her face!

Eh, I don't think I'll really hide. I'm kinda curious about new people. But I do sleep a lot now, so she might not see much of me simply because I have naps to take. 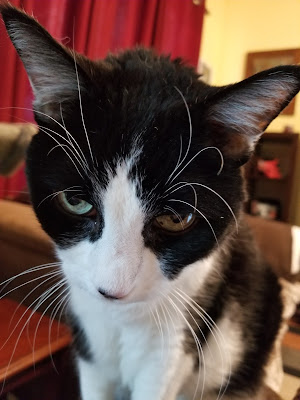 This is Northern California right now: 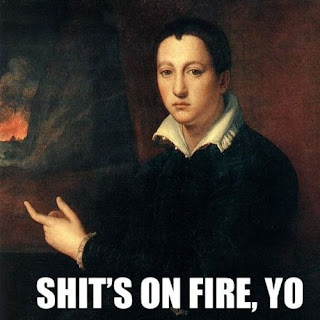 There are 15 fires raging, 500+ people missing, at least 30 have died, 2,000+ homes destroyed, 30,000 displaced and evacuated, and it's nowhere near over. Some of the most beautiful parts of NorCal are ash now, and some historical sites are threatened.

Charles Schultz's home, along with a lot of his memorabilia, is gone. His widow escaped, so the important part is covered, but it gives you an idea.

Real people. Their world is on fire, and there's nothing to go home to.

But we're fine where we're at. The closest of the fires, the Atlas Fire, is about 45 miles by road, maybe 25 in a direct line. We had a couple of super smokey days--the Woman was not allowed outside because she has breathing issues--but the wind picked up and blew a lot of the smoke out.

Good for us, not good for firefighters.

The Younger Human got *a lot* of smoke from another fire, so much that the air was brown and seeping in under his doors. But his house should be fine, the fire would have to push closer and jump the Interstate to get to him and his Much Better Half and the dogs.

But still...shit's on fire. And it will be, for quite a while.

I know, it's been over a month since I blogged. I had stuff to talk about, but I've also had a few people complain because I talk about book stuff too much, and they don't come here to read book stuff. So I just kinda shut up.

But...book stuff...I now have some hardback copies of The Space Between Whens and I'll pop a link up soon, probably in the sidebar. 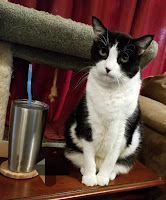 The Woman and I have a daily game going. It's called The Battle of the Straw. I sit on the little table and lean toward the straw, she stops what she's doing and wags her pointy finger and says, "No, you don't." Then she goes back to reading or typing or looking at immature things on Reddit, and I do it again.

She thinks she's winning, but we all know better.

Now Buddah? He tried to play it once but he didn't quite grasp the point. He jumped up there and grabbed the straw right off the bat. So it was over in, like, 1.4 seconds, and what's the fun of that?

Well, it was fun for me. I got to hear her call him a little shit and then she chased him off the table, and had to get a new straw.

This is what I'm gonna do the rest of the day:

I'm old, doods. All I wanna do is hang out and sleep. I might move to the sofa or the bedroom, but this is it. One nap after the other, interrupted only by snacks.