Ok, after crushing my hopes and dreams on my birthday, the Woman said that she had another reason for not letting me get my driver's license on my birthday. Apparently, not everyone passes the test, and she thought that if something went wrong, it would ruin turning 16 for me.

Hell, she went to take hers on her 16th birthday and the testing guy was really mean and yelled a lot, and in the end wouldn't even let her take the test because she didn't know where the high beam indicator light was. A couple days later, he wouldn't let her take it because the tail light on the car was cracked. So she knows about ruined birthdays from driver's exams.

But then...then... she got up super early today, and totally made this happen. 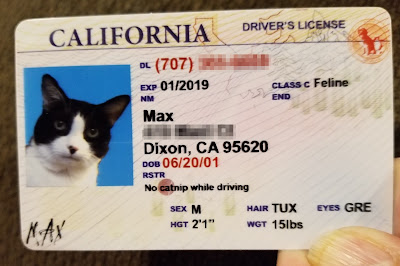 Now, I have some money saved up so I have to count it all and then set aside this year's Toys for Tots funds, but I think for once I'm going to spend some on myself and get a new car. I'm pretty sure Amazon sells some spiffy ones, so I know what I'll be doing tonight.

I think I want a convertible, but I'm not set on exactly which one.

And today got even better! She bought real live fresh dead steak for me, and tonight the man grilled it, and then she shredded it so I have steak treats for about a week.
Posted by Max at 6/30/2017 06:42:00 PM 14 comments:

So. Yesterday was my sweet 16th. I have lived longer than any other cat that the Woman has lived with. She's kinda surprised, given my weight, but she's not going to examine it too much, because...well, why rock the boat?

I was all excited when I got up, because THIS WAS THE DAY! I was going to go to the DMV and get my license. But then the Woman was all, "Sorry, dood, I have to go get my boobies squished," which was fine, because BOOBIES, but when she came back she dosed me with some hard reality.

She sat in her chair and said, "This is where the driver sits. And this--" she pointed at her foot "--is where the accelerator is. Can you sit here and get your foot down that far? Because you have to in order to make the car go."

It wasn't even noon and my dreams were shattered.

Still, there was STEAK, which made up for it, and PRESENTS, which were sent by awesome people. Auntie Michelle sent me some crunchy treats, which I didn't get a picture of because I made the Woman open them as soon as I saw them, and they are really good.

But the Woman took pictures when I opened the other present. This one from the Food Lady, my spiffy editor at Mousebreath. 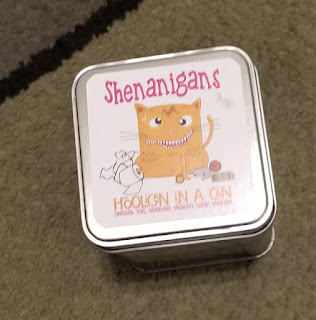 HOOLIGAN IN A CAN!!! 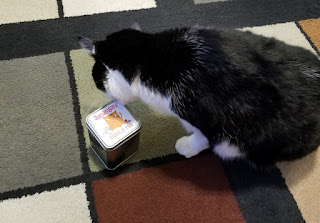 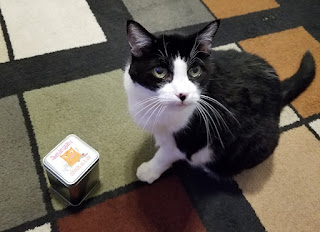 Open it for me. I don't have thumbs. 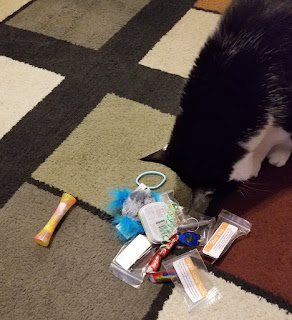 Holy crap, doods! LOOK AT ALL OF THIS STUFF!!! There's nip and super nip and nip toys and tiny treats to make my breath fresh and a feathery thing that Buddah reallllly wants to get his paws on. 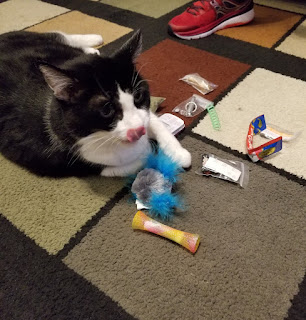 I decided to guard the feathery thing for a while. And get my spit on it. Just to ruin his fun.

Tonight, there was bacon, so it was like my birthday kept right on going. And there's still more steak! The only disappointment was not getting my driver's license, but I suppose that's all right since I really hate going outside.

Hahaha He had cereal...

The Man passes gas at night, so when he gets home in the morning he's the one who opens a can for us. This morning, he not only opened a can, but he grilled fresh steaks for me.

Srsly, doods, this is like the best birthday month ever. I'm getting steak treats EVERY DAY, and the people are eating hamburger helper and hot dogs and cereal.

So far, so good

Six days into my birthday month and things are awesome. The other night the Man grilled 3 little steaks for the Woman to cut up into treats for me...and then he made Hamburger Helper for them to eat.

Seriously, doods. I got steak, and they got Hamburger Helper. 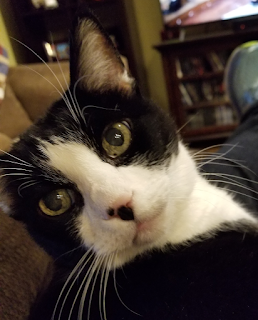 In other news...in the right sidebar, under my picture, there's a poll and I would very much appreciate it if you guys would answer the question. It's simple: for the Wick After Dark series, would you like to wait for 1 long book, or would you like to get it as 3 novellas (shorter, about 50,000 words each.) The way we're doing it, the final book would essentially have 3 stories with their own ending that merge into each other, so we can do it either way.

So, whatcha like? One long read or three shorter ones?

Please and thank you!

You know what that means, right? 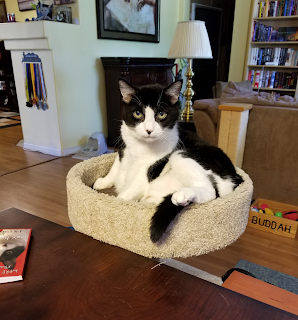 IT'S MY BIRTHDAY MONTH!!!

No one really knows exactly what date I was born on, but they guessed it was somewhere between June 10-June 25, so the people picked the 20th to be my birthday. But this is a milestone birthday, so I'm gonna celebrate all month long.

YOU GET YOUR DRIVER'S LICENSE!

As soon as I'm done here I'm going to the DMV website to download the manual so I can start studying, and then on my birthday I'm going to suck it up and let the Woman take me outside so I can go there and take the test. And maybe after that we'll go to lunch and then car shopping, because at this stage of my life I totally deserve a convertible.