Oh, the Woman is telling everyone this is dye, but doods, I'm gonna tell you what it really is. 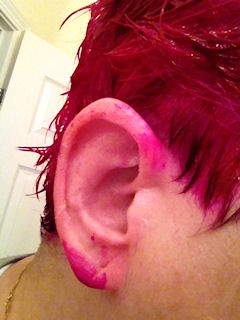 Today, this blog turns 9 years old.
NINE YEARS.
I wasn't even three years old when it began.
Heck, I was barely over two.

We were living in Evil, Ohio when it began.
My entertainment was the sticky people outside.
Now those sticky people are like real people.
Like 5th graders all the way to high school.

Nine years and it's gone by too fast.

Still, I've gotten to know a lot of REALLY cool cats!
And the Woman made some REAL friends from it.
So that's totally worth it going by too fast.

Doods, check it out, I got a new bed to lounge on in front of the fireplace thingy. Which is not on but should be. 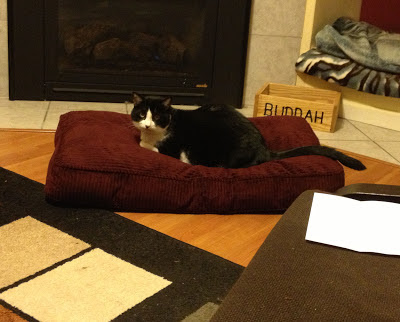 The guy in the blue shorts brought it today; it's a gift from an admirer! And the timing is really good, because I was a bit under the weather this morning (horked a couple of times, but I'm fine now) and nothing makes a guy feel better than presents. Especially awesome presents!

I hope Buddah doesn't get any ideas, 'cause this is MINE and he got some toys instead, because he's a crackhead and loves the little felt nip toys.

SOME kitties are allowed on the table! 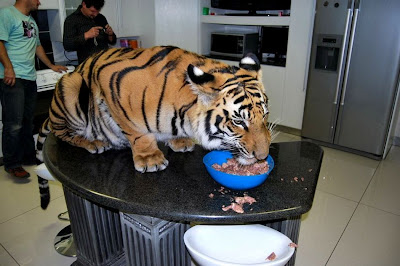 Chey? Is that you?

There are rules; I know that. I am fully aware of them and make an effort to follow the ones that result in me getting crunchy treats and bites of people food.

One of the major dinner time rules is that the kitty does not get on the table while the people are eating dinner.

If the kitty breaks this rule, all usual tiny tastes of whatever they are having will not be forthcoming.

And you know, I have never broken this rule. Not even when I was a kitten. They ate, I did not get on the table. I understood that rule, and obeyed it.

Doods, I have no idea what I was thinking, but I sat in a chair at the table while they had their soup, and the next thing I know I'm on the table and the Man is shoving his hand toward me to make me get back onto the chair. He didn't have to actually push, because as soon as I was up there I had an Oh Frak moment and immediately turned around.

So I jumped down to the floor and went over to the Woman, stood on my back paws and patted her leg to say I was sorry, and she looked down, puzzled looking, and asked,  "Do you have a headache or something, Max?" She looked at the Man and said, "He really looks like he's got a headache."

Well, I was really good for the rest of dinner, and when she was washing out bowls--I was not allowed a taste of the soup because it wasn't kitty-friendly--she got a couple of crunchy treats out for me and Buddah.

"You were a butthead, but only for a moment," she said. "You can have a couple of crunchies."


Why is Buddah on the counter? 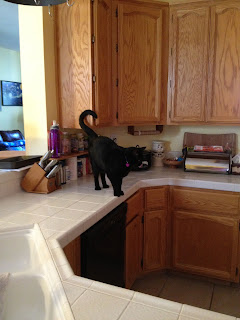 He's watching me work the Grandma, who had cans of Stinky Goodness out, even though it was like 5 hours early for dinner. 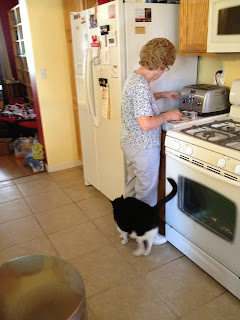 Now see, I like her, because she delivers. No teasing, no "Oh is Max hungry? Well, you can eat tonight." She took those cans from the Man, and opened them up. 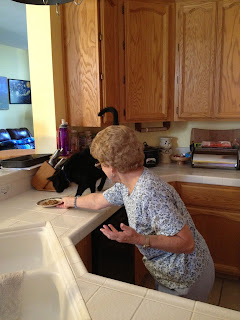 And then she gave use each a plate with AN ENTIRE CAN.

Really, the People need to take lessons from her. She also gave us crunchy treats. CRUNCHY TREATS.

And doods, when the people go to Vegas in a month, she's gonna come stay with us!

My goal is to gain 5 pounds while they're gone.

I've been cheated...maybe for YEARS!

Ok, so I got suspicious about something, because every night Buddah walked past me, smelling of crunchies.

Every night, after I smelled it on him, I went into the room where the Woman was, usually the living room where she was planted in her comfy chair with her computer on her lap. She would look at me coming in and say either "Hey there, Big Guy" or "Mister Max, where ya been hiding?" but she never got up to get ME anything.

So the last few nights I've made sure I was in the living room at the time just before Buddah comes sauntering past me with betrayal on his breath.

Doods...at 10:15, almost on the dot, Buddah stands on top of his tree near the kitchen and lets out this pathetic meow; the Woman looks at the clock, then looks at him, and says, "Okay, you can have something."

I don't know how long this has been going on--Buddah's not talking--but no one EVER came to give me crunchies or to let me know this was evening a possibility.

So tonight at 10:14, before he could let out that wail of pathos, I jumped up on the arm of the sofa nearest to her comfy chair, and asked NICELY, and doods, she looked at the clock, asked, "You want a snack?" and then got up and got us treats!

I'm not sure whether to be glad that Buddah trained her so well, or to be really, really ticked off that I've been missing treat time for maybe years and years.

If you saw this on the Woman's Facebook tonight, you have to know it is NOT what it looks like!

Really, I was just trying to sniff her breath and see what she had for dinner, because she didn't have dinner at home. Oh no, she went to see Denny and she didn't bring anything home for me.

So I needed to check to make sure she didn't have any of Denny's grilled chicken, because he always sends me some grilled chicken and she might have eaten it on the way home.

But I did NOT kiss her. 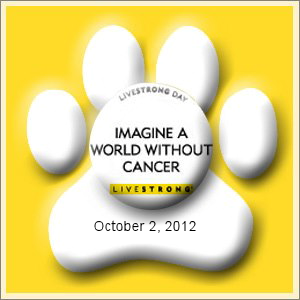 Every one of those colors has a ribbon that represents an insidiousness we’d all like to see wiped off the face of this planet. What bites even more is that list is such a tiny one; there are so many forms of this scourge and not enough colors to cover them all.

I doubt any of us has escaped the touch of cancer; we all know someone who has battled it, some who won and some who did not; we’ve all loved and cared about someone who has faced the fight. Some of us—not me, and I’m grateful for that—have been the ones in the thick of the fight, reaching down deep for that one thing that will tip the scales to victory.

It’s never a fair fight. I think that’s why, when someone wins, it’s a special kind of wonderful and deserves over-the-top celebrations. And it’s also why, when someone loses, it’s an especially heinous thing worthy of deep, boiling anger and snot-running-down-your-face tears. Because it’s never fair, it’s never remotely fair.

Cancer is an enemy you can’t see; it invades and destroys, and does it so quietly that it can be months before anyone realizes it’s there. It’s hard to fight something you can’t see, something that steals an advantage without letting you know the invasion is coming.

People do what they can; some go to school for years and years to learn about how to fight cancer, and how to sneak up on it. Some put their shoes on and walk against it, raising money so that the people who went to school can fund their research. Some write papers to teach others, some write blogs to support their friends. Cancer is one thing everyone is on the same side about: everyone is against it.

It doesn’t really matter how you go about taking your stand against cancer, whether you’re on the front line, finding new drugs to battle it, or if you’re in support services, making sandwiches for the people who are walking and raising money, or even if you’re the one sitting at a computer, trying to form a coherent thought about it. It only matters that you want the fight to end forever, and you and it to end in our favor.

People, cats, dogs, whomever. You’re in it to win it, to quote the slogan of one of the big breast cancer organizations. Do what you can, when you can.

Between last years’ Livestrong Day, and this one, we’ve lost far too many to cancer. Some are our cat friends, some are their people.

It doesn’t matter if they were a cat or a human, a dog or a bird or a rabbit or a hamster.