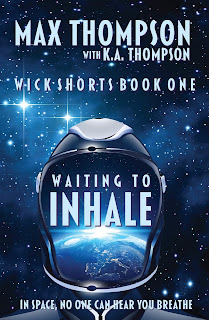 Oh, look. It's a bouncing baby book! Now that most of y'all got it for free LOL it's starting to pop up at online retailers. Amazon has it I think Kobo has it. B&N, Apple, and others should follow soon. The print edition *should* have made an appearance, I'm not sure why not, but that part of things is in someone else's hands. But it should be soon, I think.
We're hard at work on book two of Wick Shorts...and there will probably only be two. And that's a good thing--and don't worry, it's not the end of Wick, but will lead into a new beginning later in the year.
In other news, today I managed to hock up a small hairball, small enough to be easily overlooked, and placed just where the Woman was sure to step in it. And doods, she totally did, it squished between her toes, and she was about 3 kinds of skwicked out by it. My day is made.
Posted by Max at 4/29/2020 11:29:00 AM 3 comments:

He was all kinda of awesome...

Bear in mind this is a heard from a friend of a friend kinda thing, but I was told today that Anthony Bourdain was a fan of my blog and even used my X levels/kind of Y thing on occasion. It makes me kinda sad that I didn't know that when he was alive. It also makes me happy...but I wish I'd known.
Posted by Max at 4/24/2020 11:33:00 AM 4 comments:

Ok, so I was in the front room, just got a drink of water and was thinking about bugging the Woman for something to eat, when the neighbor's yellow lab came up to the screen door. Now, I'm nothing if not polite and I headed over to say hello...dood took one look at me and then turned around and RAN AWAY.
I mean, I am an overwhelming amount of awesome, but sure he understood there was a security screen door between us, and I wasn't going to eat him.
Posted by Max at 4/22/2020 05:31:00 PM 4 comments: 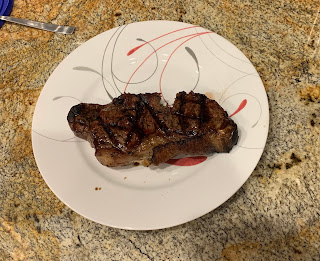 One of the good things to come out of all the people isolating themselves is the serious limiting of shopping trips. When the people do venture out to get groceries, they're getting enough for at least a week, and this week they braved Costco to get meat.

They came home with two packs of ribeyes. Four steaks per pack. Now, the Woman is not a fan of having steak at home because she doesn't enjoy the smell and gags a little when she has to slice it up for me. The Man likes it, but out of those 8 steaks, he'll probably eat two, maybe three.

That leaves 5-6 steaks just for me.

No kidding. I get steak every day, twice a day. It's the first thing I get in the morning--though they're still really bad about getting the seeds out--and I get it again as a snack in the evening, and luckily there's usually only one seed in the 6-7 bites I get.

I'd complain, but...who wants to risk not getting steak because the people get annoyed?

And totally unrelated...a couple people asked when the print versions of Waiting to Inhale will be out. And the answer is...I dunno. We kinda jumped ahead of the publisher in putting out the digital version on Book Funnel when we were doing freebies, so it still hasn't really been "published." I would think it's soon, but I might be the last one to know.

Day 5,923 of the quarantine. The Woman is speaking to me as if I were a toddler. Apparently I have a mooshy wooshy cutie face and she wants to kissy wishy it. Fortunately, I also have death breath, which has saved me from several unwanted cuddles. I would complain further, but I am also His Widdle Starving Majesty, and Too Cute To Not Feed On Demand. Bast help us all.
Posted by Max at 4/04/2020 11:57:00 AM 6 comments:
Newer Posts Older Posts Home
Subscribe to: Posts (Atom)