All right, I was nice and I shared some of the food with Buddah. Well, it's not like I had any real choice; the Woman decided to split a can of beef with gravy between us as a surprise snack yesterday because we've been so helpful in nursing her back to health after she went and ate some death food the other night.

Later on, for dinner, we split another can, this time of some chickeny goodness.

And doods, this stuff is AWESOME. It's Purina One Smart Blend stinky goodness, and so far I am really digging it (and no I am not being paid to say so, I just think you guys should know when there's some premium noms out there to try...)

Buddah must have liked it too because he made some pretty disgusting sounds while he ate, and he licked the plate so hard the Woman thought he was going to push it off the counter onto the floor, where it would shatter into a million pieces like all her intentions of cleaning the kitchen.

Doods! Look what my man Skeezix sent me! 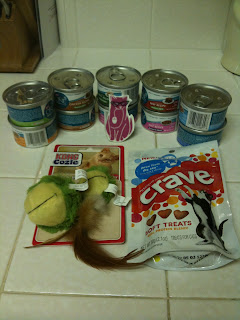 Skeez had a giveaway on mousebreath! and I won! I WON FOOD!!!!

I really kind of want to eat it all tonight, but since I need to borrow the Woman's thumbs for that, I don't think it's gonna happen.

Oh, and the box was specifically addressed to me and it said NOT BUDDAH so that means I don't have to share. 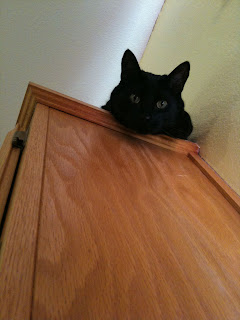 He's, what, six years old? Six and in all those years he has learned nothing from me.

Like yesterday? Well, the litterbox had not been scooped in a timely enough manner for either of us. Granted, I'm a little particular and would prefer it if the people hired someone to come in and stand there and scoop after both of us every time we use the box, but I'll settle for frequent scooping and
cleaning.

Buddah usually doesn't care. The box can be loaded and he hops right in. But yesterday even he didn't want to get in it, so he pooped on the floor right in front of it.

Now, this I can respect. It's the right thing to do: it sends a message and it means the people have some cleaning to do.

But doods...when you have to poop on the floor the right thing to do is to walk away quietly. Our box is in the laundry room, which is in between the hallway and the rumbly bike room. The people rarely turn the light on when they're passing through the laundry room to get out to the bikes. So if a guy has to resort to pooping on the floor... doods, you stay quiet and hope that a person walks in there and steps on it barefoot. You just do!

Last night he pooped on the floor, and what did he do?

He went and told the Woman! I mean, first he was a little confused about what to do. He jumped on the fake fireplace in the room with the dammit machines, and when she walked by he meowed at her really loud, it was almost like a wail; she just thought he wanted crunchy treats and told him no, he'd already had some. But then she headed for the giant litter box room to take care of her own business, and he followed her, practically hollering at her, all listen to me, listen to me!

Well, she got part of the message. She guessed that he wanted the box cleaned. So she asked the Man if he would carry the box outside and dump the whole thing so we could have a 100% clean box.

And that's when they discovered Buddah was trying to tell them he'd pooped on the floor.

No, they didn't get mad or anything. The Man scooped it up and took the box out and dumped it all and then hosed it out. The Woman dried it and refilled it with fresh litter, so Buddah was happy. I was happy to have a clean box, too, but dangit.

Buddah had a prime opportunity to get a person to step onto a nice fresh pile o'poop, and he went and actually told her he'd done it.

I think I need to just give up on him. 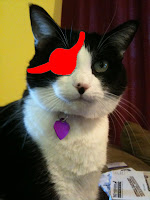 Arrrr, doods, you would not believe how good this places smells today! T' people be makin' a real live fresh went t' Davy Jones' locker TURKEY in t' oh-man-this-takes-forever cookin' thin'y. All day long I've had t' smell it cookin' and I'm startin' t' drool, but tonight THERE WILL BE TURKEY!!!

No one tell Buddah! He's been sleepin' in t' aft o' t' house all day and I don't think he has a clue. It's gonna be all mine!

Dooods...last night the Woman got herself a piece of cake, because she's trying to lose weight and OBVIOUSLY cake is the answer (fark yeah I'm rolling my eyes) and I wanted some but I knew if I asked I wouldn't get any. So. Doods. I did the whole dart-and-wind-between-their-feet move and it worked!

She tried so hard to not trip that the plate tipped forward and the cake plopped off the plate and onto the floor icing side down. I looked up to make sure that she wasn't going to snap a foot into my head, but she wasn't even mad; she just said "ONE BITE" and I grabbed myself a giant bite while she got paper towels to clean it up.

That in itself would have been good enough, but tonight the People had real live fresh dead chicken for dinner, and I didn't have to do ANYTHING to get some. The Woman just cut some up for me and put it on my plate!

Better yet, BUDDAH didn't get any because he was in the other room sitting on one of the dammit machines and never came in to see what the food being cooked was.

Look. The People went to this new place where she can practice her walking a little bit more, and look what they found. 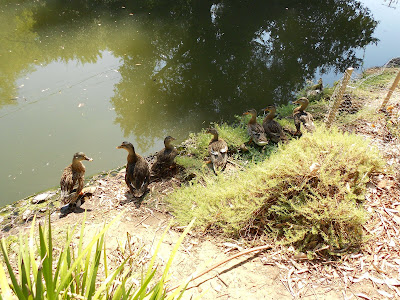 NO. They did NOT bring one home for me.

Man, I bet they're tasty. 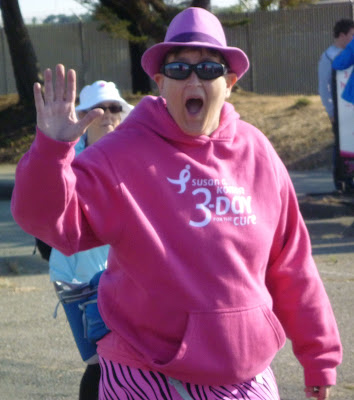 Either that or she needs to stop licking random krap in public, because she managed to pick up some kinda cootie.

Most of you guys probably already know that she didn't finish the Big Walk this last weekend because of some kinda cooties that made her queasy and headachey and then barfy. She's still kinda blah but she's starting to feel a little better, and is already making noises about getting back outside to practice walking some more, and then going to Hotlanta with DKM to walk with Jeter's mom and a buncha other people.

Anyway, the 20 miles she did walk she said was kinda hard but also lots of fun because she got to walk with DKM's cousin Joette and she likes Joette a lot and covets her walking sticks. While she was walking, the Man was helping walkers with blisters, and I guess he did a lot of sucking crap out of some really nasty looking ones. He helped for 2 days but then he had to bring the Woman home so that she wouldn't give those cooties to other people.

On the first day, just before she started feeling really bad, he took this picture of her coming into camp. For 20 miles, she does look kinda happy.

Either that or the Man had a candy bar in his hand and she's all stick that thing in my mouth!

Hahahahaha Doods, you gotta go look...people have been captioning me!

I'm pretty sure you guys can caption the picture, too...

The Woman is getting ready to shut down the computer and I don't think the Younger Human knows my passwords anyway, so I'm offline until next week. The Woman filled up the ginormous crunchy food bowls because she's just about done practicing her walking and she and the Man are going to go meet up with Diva Kitty's Mom and cousin in San Francisco where she'll walk for real. The Man is going to sit in a tent and wait for her to come limping in, crying because she sucks at walking so much. Oh, and while he sits and waits he'll help other walking people if they get hurt. I think he's going to rip their blisters open and suck the gunk out, or something like that.

And while he's sucking blister guts out, DKM is going to follow the Woman round in a van and point and laugh at her. But if the Woman does ok, DKM might give her a Diet Coke, and might not run her over with the van.

But that picture? We are totally not being nice to each other. We were just excited to see the ginormous food thingy after so long of not seeing it. And the Woman set it up to make sure we had enough food...but we both wanted to try it out and we both got there at the same time, so we took a few bites before I whacked Buddah upside the head.

The People leave for the Boob Walk day after tomorrow, but the Younger Human is going to come over and open cans of Stinky Goodness for us. He's gonna smell like That Damned Dog Butters, but still, I like him. He gives me a WHOLE can at once instead of making me share of with Buddah.
Posted by Max at 9/06/2011 08:47:00 PM 12 comments:

These are the office closets. There are 3 of them, and they are very tall. Eight feet tall, I think. 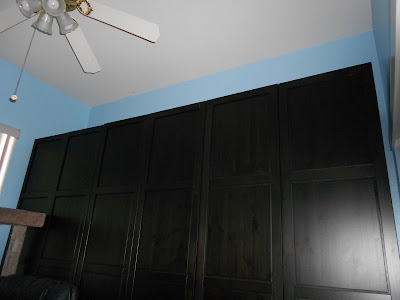 They're a very good place for a kitty to spend a Labor Day... 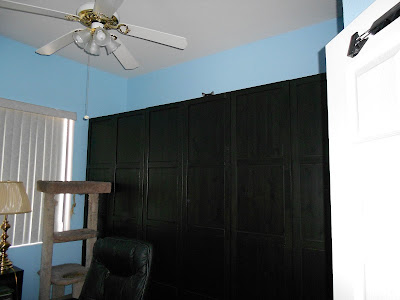 Right there in the middle of the floor!

I did was any self respecting kitty would do; I crept up on it quietly to make sure that 1) it wouldn't get away and 2) that a people wouldn't hear me and take it away. I got right on it and doods, I worked that sucker! I had to get it between my paws just so and wiggle it until the top popped open, and then I had to make it stay open while I got a paw in there to scoop the guts out.

It was hard work.

The freaking bag was empty!

All that hard work, and I barely got any crumbs to lick off my paw.

On the plus side, the Man did sneak up on me and watched me try to get the treats out, and I impressed him enough that he got into the treat drawer and got me some.

But man, a free range treat bag should NOT be empty!