And it's a bouncing baby book! 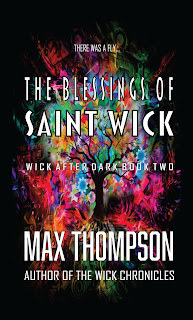 All righty. The newest book in the Wick After Dark series, The Blessings of Saint Wick, is now out. The Kindle and hardback versions are up, and the paperback should pop up by the end of the week. Sooner or later both print versions will surface on other online bookseller sites, but I don't know when.

Wick's a little bit mischievous in this one...for a good reason. And you don't want to miss drunk Aubrey. Or what Aisha threatens to tie into knots. And...there was a fly.

We're kinda sighing in relief that this one is done and ready for readers, because the next book...YES THE NEXT BOOK... is like 98% done (already had its first pass with the editor and beta readers) and just needs some polishing. It's the book for the people who weren't comfortable with the After Dark series, and you should be able to jump right into it without having read any After Dark.

It was originally going to be a Wick Chronicles book, but it's shorter and we're bouncing back and forth with the editor about whether it should start its own series of shorter stories.

But the new book, the one you can get your sweaty little paws on, is up, and it's a long one, about as long as The Space Between Whens.

I might be just a bit verbose. And we could have cut some stuff, but when it got right down to it...I didn't wanna.

I'm an old man now. I get to write what I want.

I'll let ya guys know when I have copies to pawtograph. That might be a couple weeks.

The New Teenager Got His Checkup

Yep, today was Stabby Place Day for Buddah. It was just a checkup, to get his innards listened to and for the stabby lady to tell him what a beautiful boy and how good he is. Oddly, it's not a lie. The Woman says Buddah is very good at the vet, and he'll even purr for them.

She heard a little bit of bronchitis in his lungs, but he has seasonal allergies and it's that time of year. He's not symptomatic or anything, so there's no point int doing anything about it. Pretty soon, he's gonna start crying (like literal tears) for a week or two, and that'll be it until fall. He also has a little bit of arthritis in his knees and some back end muscle loss, pretty normal for a 13 year old kitty.

He didn't even bit or growl when she took his temp...which tells me he kinda liked it. No judgment there. Whatever floats his boat. 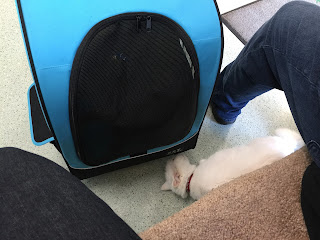 It's kinda hard to see, but Buddah IS in the PTU. While he waited for the stabby lady he got to meet Mr. Boo, the shop cat. I've never met him, but I understand he's super friendly and has kind of a calming effect. Buddah didn't growl or hiss at him, and they sniffed at each other through the screen.

Mr. Boo also greeted the people and made them give him chin and head skritches, and he sat on the Woman's lap a couple of times.

Now, I'm not sure how I'd react--I might have growled at him, because the stabby place is just upsetting and a guy can't always control how he feels--but I like him anyway. He sounds like a super happy guy and he's very friendly, and that makes everyone happy.

Here's the thing...he was supposed to be put down. Someone brought him in six years ago and wanted him euthanized for behavioral issues, but the stabby lady was all nuh-uh, not gonna do that, you just leave him here and GTFO, and she let him stay. And it's like, dood, what the heck did they think was wrong with you, because you're super chill and you love everyone.

I mean, the stabby place isn't gonna let him go anywhere because he's happy where he is, but the Woman is like, if not for MAX, I might want to give that pretty white boy a home (even though for realz she's not open to the idea of more cats now. It's the IDEA. He'd be awesome.)

But WHO DOES THAT? Who puts down a perfectly good cat just because of a few issues? And then WHERE THE FRAK ARE THE ISSUES?

Yeah, this makes me want to yell a lot.

I don't like going to the vet, but I like this vet, if that makes sense. She thinks we're beautiful, she understands that we're done getting shots, she talks nicely to us, and she won't just toss a cat aside because he's inconvenient.

I get to go see her again in about 3 weeks for a recheck on my thyroid. I'll complain about it because I don't WANT to go, but doods, if I have to, at least I got a good one. 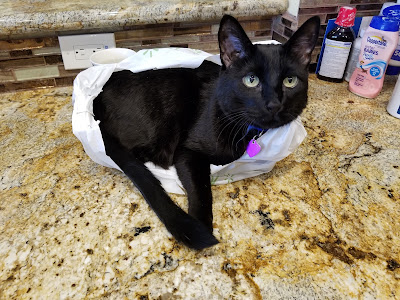 That's a hell of a lot of years I've had to put up with him.

He's still a PITA, but over the last few months he's been a little less so, probably because the People put Feliway diffusers all over the place. I don't think he's matured, but I'll take what I can get.

It's still early in the day so I haven't given him his present yet (don't tell him, but I got him a new nip banana!) but after dinner he'll get a special meaty treat and then I'll give it to him. He loves nip bananas almost as much as I do, so he'll be set for the rest of the evening.

I might even let him have the bed in front of the fireplace tonight. It all depends on whether the people turn it on or not.

WHY DOES SHE KEEP CALLING ME "PUPPY???" 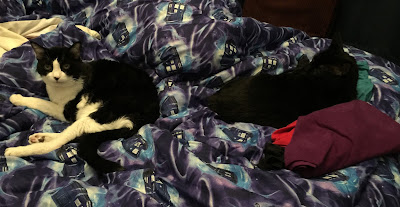 AND WHY IS BUDDAH SO CLOSE TO ME?

(ok, we were messing up the bed because the Woman wanted to change the sheets and we were all "nuh-uh" but still. He stopped way too close to me.)

Still waiting on the pills...

Yeah, I dunno. There was all that "Ooh we have to give Max pills now and he's going to hate it and his life will be miserable," and I was bracing myself for it, but so far, no pills.

There's been bites of cheese, like tiny bites that just make me want more, but no pills.