Ok, I've been 17 for 10 whole days, and I have to say, I kind of enjoy being an old man. There's been steak literally every day. I mean, the other day the Man was outside grilling a steak for me, and then he and the Woman had sandwiches. If that doesn't mean I rate the highest here, I don't know what does.

It's been wicked hot outside lately, so the Woman has been staying home to work more than she's been going over to Starbucks. We're still waiting on stuff to finish The Book of Hyrum, so we dove into the next one, and doods, we got, like, 80% of the vomit draft done. At first we were just going to take more notes for it, but then we started writing, and...boom. A book started to form.

Last night while we were working, I looked up and the Woman had actual tears in her eyes. And I was all, what this isn't sad stuff, lady. Because it's not. And she was all, well it's not sad but it is stressful and feels really unfair to do this to such a nice person. So I reminded her that he's not real and then she threw the computer across the room and yelled WELL HE IS TO ME.

Well, some of it.

The People are starting to talk about rearranging all the rooms here. Like, the library becomes the living room and the living room becomes the office and the office becomes the dammit room. This happens every now and then because they got so used to moving every couple of years thanks to the USAF, but actual moving sucks, so they make everything feel new. The thing is, Buddah's gonna THINK we moved and lose his damned mind over it.

So no one tell him.

It will amuse me, and at my age, being amused is important.

The house is going to be totally trashed while they do this. We could have a party and they'd never even know it. 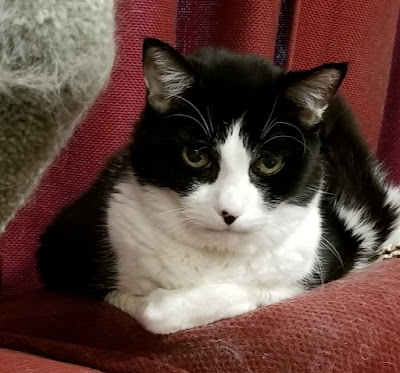 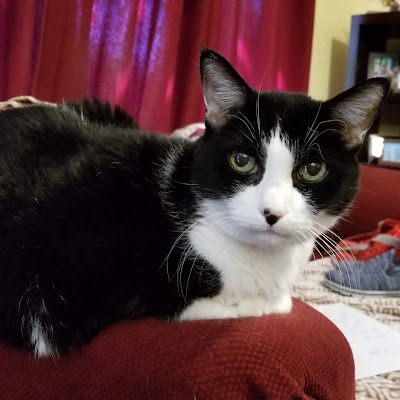 This time last year, the Woman was pretty sure I wouldn't last this long, but here I am, and I feel better this year than last.

I got my presents early this year, mostly because the People aren't sure exactly what day my birthday really is, and they figure my actual birthday was a week or two ago. Today there will be steak, just for me (but I'll share with Buddah because I'm not a monster) and naps on the big bed, and after dinner I'll hop onto the Woman's lap and we'll watch some TV or a movie.

It's not as exciting as getting my driver's license last year, but that's all right.

Yes, she should be nervous...

That was what the Woman asked when she walked into the bedroom and saw this:

And the answer is, of course, yes, she should worry. But really she should only worry a little bit about us being in the same room together, and more about Buddah finding his way up. 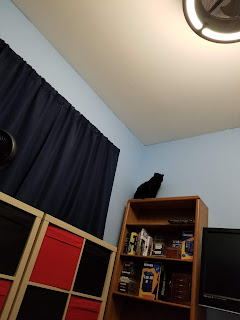 The room has been like this for a while now, but he just now had an epiphany about the top of the bookcase, and from there he can launch his massive asterisk right onto the bed. So if she's going to worry about anything, that's probably what she needs to focus on.

The next book in the Return of the Wick Chronicles series is pretty much done. The editor has read it and really likes it, the beta readers have read it and found some really stupid typos, and the consensus is that everyone is gonna love Hyrum. We've seen a mockup of the cover and it's spiffy. We're just kind of in the hurry up and wait part, and with summer there's more waiting than hurrying it seems. But since the last one only came out like 6 weeks ago I shouldn't be all twitchy about it, but I dig this book and want it out NOW.

The first book, The Whens of Wick, is getting good buzz but oddly no Amazon reviews.

Book two is called The Book of Hyrum. You'll never guess who it's about.

The People carted me off to the stabby place this week (as whined about in this week's Ask Max Monday column over at Mousebreath, complete with pictures) to get some followup bloodwork done, and they got the results today. Everything looks good and they have my medication dose nailed down, so I won't have to go back for a few months unless something else pops up. I'm only two days away from 17, so things might pop up, you never know. But for now, all is well. 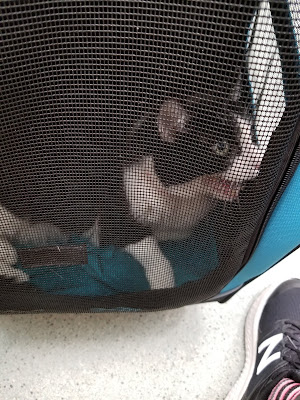 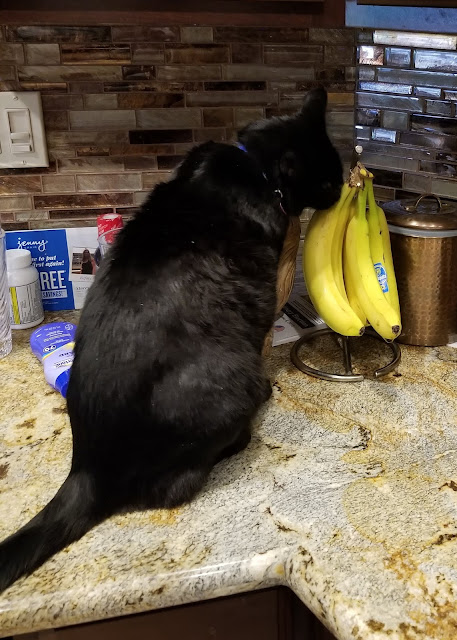 Every time the People buy bananas, Buddah goes bat crap crazy and spends more time than can be possibly healthy licking them. No one knows why. If they open one and offer him a bite, he backs up and looks at them like they farted, but hanging there or resting on the counter, it's LickaPalooza.

I wish I had a picture of the end result of all his licking. It only takes a day or two, and the banana is covered in thing brown streaks from where he's licked, and it's damn near art. Long, sweeping streaks made up of hair-width lines, some running the length of the banana, some swirled like the sky in a Van Gogh painting.

Kinda thinking we should preserve them in acrylic and make some money off him, but the People always eat the damn things before I can figure out how to do that.

I did not intend to take time off from here...

So, right after talking about the people taking time off, I kinda let the blog slide to the side, but it wasn't intentional. I've been spending a lot of my time doing some hard-core napping, plastered on the big bed with the Doctor Who bedspread, barely moving so that the Woman comes in and pokes me to make sure I'm still shuffling along this mortal coil.

Yeah, no, I don't know what that really means, but I read it once and it sounded cool, so...totally stole it. 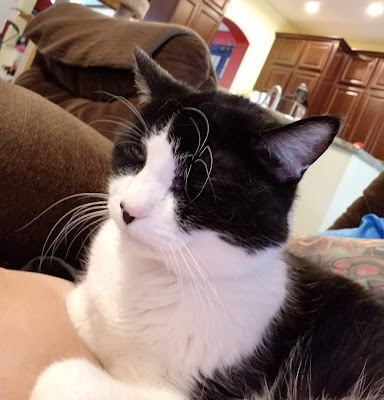 I also spend a lot of time sitting on the Woman, because otherwise she spends too much time with the computer and that's just not good for a person. We watch quality TV together most of the time when I'm sitting on her. David Bromstead is my new imaginary boyfriend (hey, I'm neutered, it's not like gender matters here) so I watch him show lottery winners homes they can buy and we like to shout at the TV when people shopping for tiny houses get inside and mutter, "Wow, this is small," BECAUSE THAT'S THE WHOLE POINT, KAREN.

Oh, yeah. I yell at KAREN a lot right now, too. Just because its the Woman's name and I think it's kinda funny. I'll get over it soon.

Earlier this week I got to say YOU'RE SLIPPING, KAREN because she finally decided to order 10 hardback copies of The Blessings of Saint Wick but after it was took late to stop the print run she realized she'd ordered 10 more copies of The Space Between Whens so now we have A LOT of copies of TSBW.

I'll get links up for anyone who wants a pawtographed copy soon. For that and The Whens of Wick (which is getting really good buzz, which makes me happy!)

I think we've been dragging our heels on that because we kinda want to find an alternative to Paypal but haven't settled on anything yet. The Woman is, like, 6 kinds of pissed off at them because she keeps trying to delete a bank account from her Paypal and it keeps popping up with I CAN'T DO THAT RIGHT NOW, KAREN. Or something like that. She's pretty close to closing out the whole Paypal account, if she can find something better.

But, yeah. I haven't been doing much other than dictating the next book (The Book of Hyrum, editor is looking at it right now) and napping and watching TV. And for a guy who turns 17 in a couple of weeks and no one expected him to get that old, it's not a bad life!

Seriously, doods. Eleven days until my declared birthday, but realistically I was probably born around June 10, 2001, so I'm almost 17.

Last year, the Woman didn't think I would make it to 17. This year, since I started getting seeds in my snacks, she thinks there's a chance I'll make it to 18. I mean, at this age, who knows, but when I'm awake I'm a pain in the asterisk, so things are looking pretty good!