The People Took Time Off...

...though I'm not sure from what. It's not like they work hard or anything. 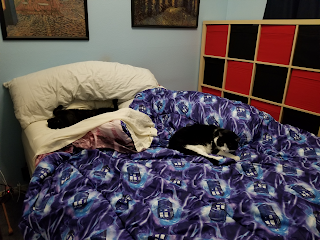 But, anyway, they took a couple weeks off, and instead of going somewhere like Vegas or Disneyland or France, they mostly stayed home and got stuff done around here.

This was my favorite thing. Not sleeping with Buddah, I'm still annoyed he was there. But the red and black cube thingy. The Man put it together so the Woman would have a place for her 6,398 t-shirts. A couple years ago he put together a bunch of wardrobes for the same purpose, but then they got a treadmill and it's in the way, and she couldn't get to her clothes. So to shut her up about it, he did this. And now the wardrobes will become the Place For Random Krap We Don't Know What To Do With. 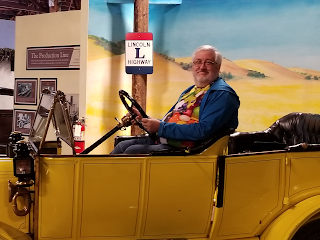 They did some fun stuff, too. The Man's birthday was during his time off so they went to a car museum to look at cars they both really, really, really want to own but will never be able to. That kinda seems like torture to me, but whatever.

They also fired up the rumbly bikes. The intent was to get gas running through the lines and to make sure nothing was wrong so that they could sell them, but then they went for a short ride, which turned into, Um, this is still fun, and then a longer ride, and long story short, they didn't sell the bikes. 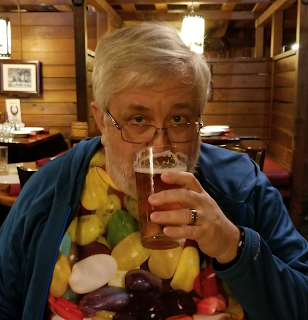 My favorite part was this.

(That's the annual birthday beer picture. The Woman MAKES him get a beer so she can take a picture. No, I don't know why.)

They didn't take me along, but the Woman brought back half her steak and then cut it up so that I had snacks for days.

There was cake, too, but I didn't get any of that because it was chocolate. And that's fine. I had steak. No cake is better than steak. 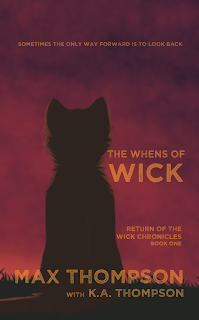 Before she took some time off, the Woman and I finished this. It's the Return of the Wick Chronicles -- Wick After Dark is done, no more overly grown up things for a while, if ever.

You *should* be able to jump into this without having read the WAD books, and doods...this is seriously the one I love the most. Everyone who's read it says it's their favorite. It's Wick's journey to find where he came from, how he came to be.

It's the shortest book in the series...it started as a novella but kinda tipped the scales into novel territory. It's also a fast read, and will tug on your heart strings.

It goes to the distributor tomorrow morning. So a week or so from now the print version will be for sale. And the Kindle version will probably hit Amazon before then.

In that vein, a couple people wanted to know when pawtographed copies of The Blessings of Saint Wick would be for sale. And the answer is...I dunno. If you want one--paperback or hardback--let me know and the Woman will order a few. But the last several books people have said they wanted copies, she's ordered a bunch...and we have a bunch sitting here because those people apparently really didn't want them that badly.

Y'all have been buying ebooks a lot. Print, not so much.

Also, if you want an ebook but not for Kindle, let me know that, too. We can create digital copies for other e-readers no problem. You just have to know how to side-load them onto your reader.

And if you haven't read any of the Wick books yet, we're going to be doing an omnibus of the first 3 Chronicle books and one of the WAD books soon. So you'll be able to get all 5 in 2 volumes. Might even save some pennies.

And by the end of summer...Book Two in the Return to Wick Chronicles series, working title The Book of Hyrum. You're gonna dig Hyrum, Aubrey's little brother. Also, one of y'all is a royal guard in it...and kind of annoying to the Emperor.
Posted by Max at 5/06/2018 04:41:00 PM 8 comments:
Newer Posts Older Posts Home
Subscribe to: Posts (Atom)