It's Monday, and that means it's time for Ask Max Monday over at mousebreath!

Doods...please go over to my column today and leave a few words for Hershey and his mom. Hershey got really bad news, and it's left him and his mom so many kinds of scared I can't even count that high.
Posted by Max at 4/23/2012 11:08:00 AM 7 comments:

I totally feel for this dood...

Look at him. Sitting there on the sofa pillows. 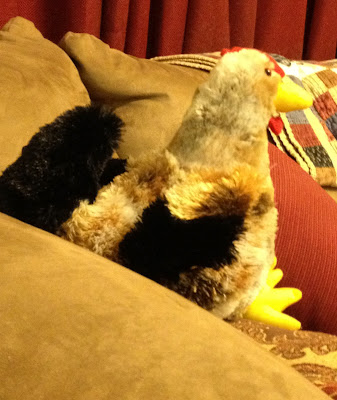 Dood won't talk, won't look at me when I say something to him, won't do anything. He never BLINKS. Yet he moves around the room like some freaking chicken ninja and I never know where he'll be. Doods, I do not trust this chicken, not at all.
Posted by Max at 4/14/2012 08:48:00 PM 14 comments:

OK guys...the Woman got to write her book. It's my turn now. And I want to write a book about stuff I think about. So...what kinds of things would you like me to think about and then write an essay about? This could be OUR book, doods!

(By suggesting things for me to think and write about, you're agreeing that I get to use your idea and publish it and the result, and probably without proper attribution...because my help is scatterbrained and sometimes forgets to write down who thunk what.)

Help me get my think on!

Oh, and the chicken has a name now. Jax.

Then the Man and the Woman sat down and had pork chops, which we were not allowed to have bites of because they were covered in this goo she called "Terikyaki" which apparently means "causes hairballs" so we couldn't taste it. but that was okay, because CHICKEN WAS COMING.

And then the time came. She said she was getting our chicken. 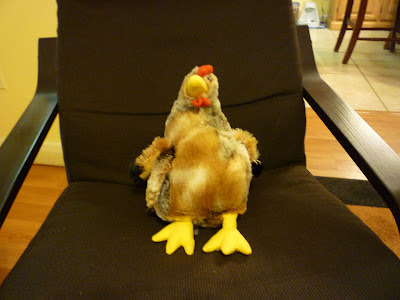 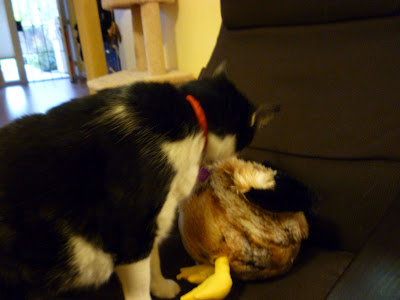 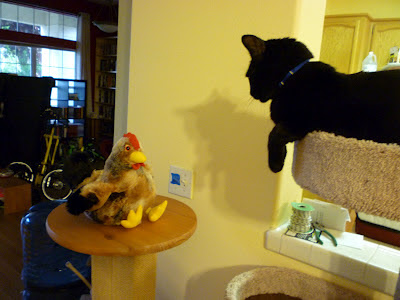 Buddah wasn't sure about it, either... 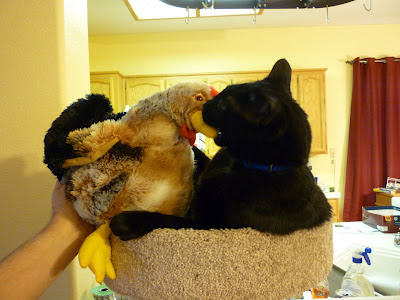 ...but that didn't stop him from trying to eat it.

Now the thing is sitting in the living room, mocking me. And he won't even tell me his name. He needs a name. Something worthy of the shame and disgust he brings to chickens everywhere.
Posted by Max at 4/08/2012 07:26:00 PM 17 comments:

I've had a hard day napping. Please don't disturb my much needed rest... 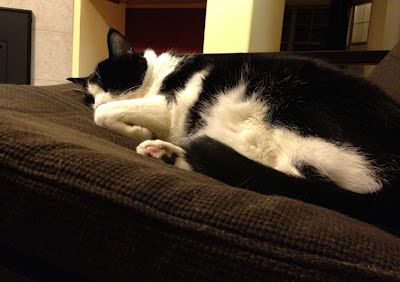 Oh, man, guys. Forget April Fool's. This sucks. Scooby from Little Cat Feet went to the Bridge today, and it was so totally unexpected. 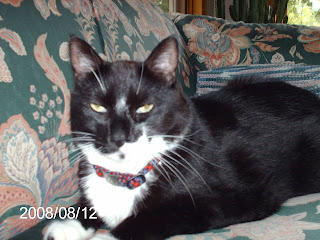 Scooby and his bros Shaggy and Scout were early cat bloggers and among some of my first blogging buddies. I can hardly believe it. I'm kinda leaking and upset, so I can only imagine how his Mom is feeling right now.

Dood. I am really gonna miss you. 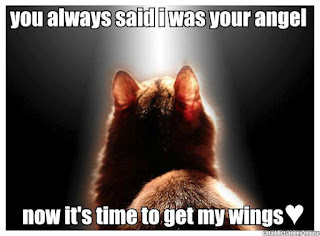 This one is for your Mom...
Posted by Max at 4/01/2012 09:10:00 PM 11 comments:
Doods, I think the impossible has happened. Buddah and I, I think we've become best friends. Over the last week or so we've spent a lot of time together, lounging on the big bed with the heated mattress thingy turned on because it's been cold and rainy, we've played THoE a lot, and in the middle of the night we've been taking turns picking on the Woman while she tries to sleep.

It's been great fun, so today I decided to give him something, a token of my earnestness. Doods, I gave him my bed. 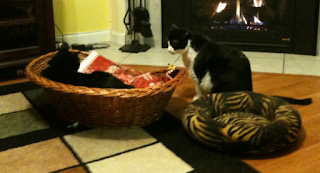 You can see how much he clearly enjoys it, and since we're best friends now, I kind of had to give it to him. e really should have become friends years ago. Who knew he could be such a fun guy?

In fact, tonight when we get crunchy treats--and we will because we'll start hollering and won't shut up until we get some--I am going to save the biggest one for him.