He came home today, and is now resting in his TARDIS, right next to Buddah. 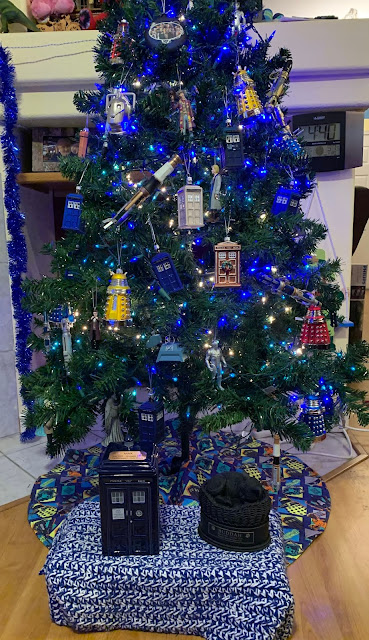 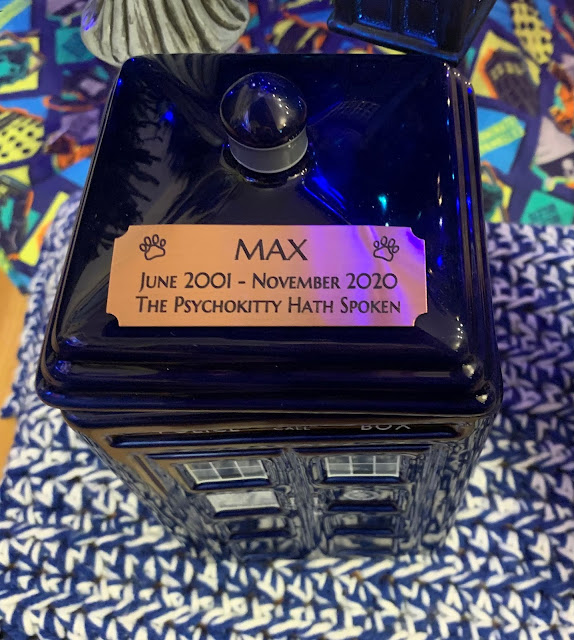 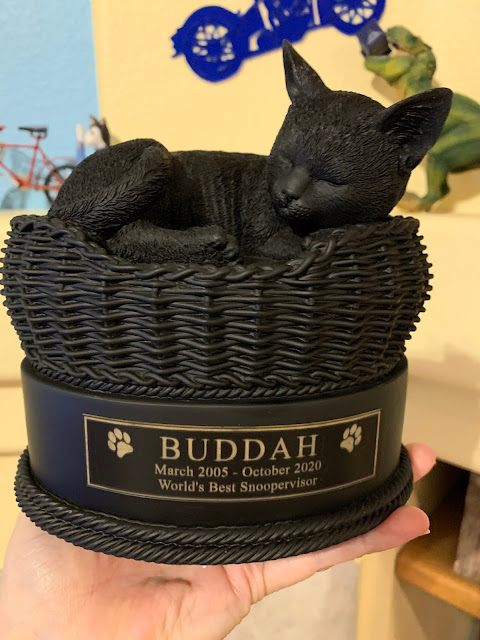 I miss them both so much that sometimes it's hard to swallow past the grief and I still haven't gone a day since Buddah died without crying, but I'm getting there. And when I'm there, I'll pick up where Max and I left off with Wick. We'd started the next story, and I'll see where it goes.

Max's personality was big, and I suspect it will be my muse for many more years.

And no, there won't be any Max's blog posts from the Bridge. I won't close his blog down; I will check for new comments and leave the archives up for people to still read. It will stay right here, but...the Psychokitty Hath Spoken. I'm letting him rest, because he earned that. 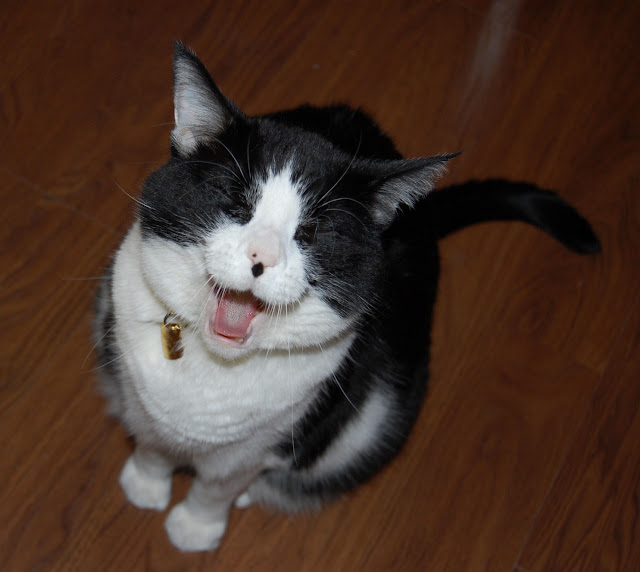 This is not the post I wanted to write. Ever. And it’s not the post Max deserves, nor what all of you deserve. But right now I’m shattered, and I can’t find the words that will do him justice. I’m not sure I will ever be able to.

Max had a spectacular day on Monday. He felt okay, ate well, and his Younger Human came to see him. He was given all the treats he cared to eat, and was about as happy as a cranky old man could be. Tuesday through Thursday were okay. Not fantastic, but okay. He ate, he sat in my lap (a lot) and just kind of hung out. Last night I couldn’t sleep, so at 2 am he curled up in my lap for an hour, even though I wasn’t wearing pants.

We all know how much he hates bare legs.

But this morning he was off a little bit. He didn’t want his cheese bite (with a dreaded seed inside) and wasn’t interested in food. I wasn’t worried then because sometimes it takes a while for his appetite to kick in, so I left him to nap in his room for a bit. I offered fresh food later, which he licked at, but he didn’t eat anything.

I wasn’t worried until he pooped in the bathroom and stepped in it. He didn’t fight me when I washed his feet off, and when I was done he just curled up on his favorite floor spot in his bedroom. Even then, I thought it was just a bad day.

But a little while later I found him near the litter box, he’d clearly tried to make it, but couldn’t quite stand up to do it. And when he made his way back to his room, he walked with his legs splayed, not in a straight line, and he just looked miserable. His eyes were glassy, face was pinched, and he just looked done.

Mike made the call, and we took him in at 4:30. He wanted to be held, so I wrapped my rms around and rocked him back and forth until the vet came in, and he stayed there until the end. I felt his last breath on my arm, felt him finally relax, and he left us at 4:50.

I am gutted, yet also so incredibly grateful that we had 19-1/2 years with him. He was, without exaggeration, the smartest cat I’ve ever known, and was absolutely amazing. He was spoiled beyond belief, but he deserved every bit of it, and because of him I’ve met people who have become the best friends I could hope for. What started as a whim—a blog written from his point of view—turned into something amazing, and was admittedly at the forefront of cat blogging. My only real consolation is that he’s on his way to be with Buddah, to help his little brother navigate the Bridge, and I’m sure there will be a raging Bridge-trashing party that runs all weekend.

A little truth…online Max was snarky and grouchy—and he was in real life, too—but he was also sweet and affectionate, and loved me at levels that often felt unnatural. My lap was where he wanted to be, he often wanted to shove his nose up mine, and we carried on long, drawn out conversations that I’m pretty sure I got right on my end. His intelligence often blew me away…and irritated me. We still talk about his discovery at 4 years old, when we had the dresser in the bathroom near the light switch. He figured out how to turn it off and on, and did so with glee…at 3 in the morning.

The light—and he knew it—streamed right to the head of the bed, in my face.

Max was the cat who could sit on the bathroom vanity and look in the mirror, understanding that the cat he saw was him. If he’d had something on his face, seeing it in his reflection would have prompted him to swipe a paw across his face to get it off (conversely, Buddah was positive the cat in the mirror was an intruder, though he did finally stop hissing at it. Gawd, I miss that goofball.) He could puzzle things out, and the only thing that saved us from an obnoxiously high gas bill was because he wasn’t strong enough to flip the switch on the fireplace.

He knew how, he just couldn’t get leverage.

Our world got quite a bit quieter tonight. He was a small cat in the end, having gone from nearly 19 pounds to 9, but he filled all the quiet spaces with his personality. I often joked that I’d stolen him from his Younger Human—when he brought Max home it was with the caveat that when he moved, so did the cat—but Max made it clear who his chosen person was, and I will be forever honored.

On Monday, I told the Boy that I wasn’t sorry anymore that I’d stolen his cat. Tonight I thanked him for it.

I will miss that furball forever, but doods, having him…it was glorious. 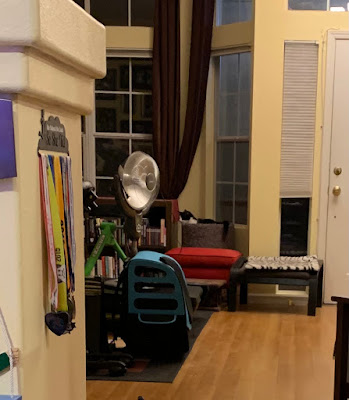 See me there by the window on my new perch? It's become my favorite place. The red thing in front of it is a footstool and just in front of that (hard to see) is a brown thingy. They're there for me to use as steps so I won't try to jump that high.
What you can't see is there are a couple plates of food on the floor by the dammit machine. I get food there, and food in my bedroom--I hardly ever eat in the kitchen anymore because why would I? They put a piece of carpet down in the kitchen so I can ear without slipping, but I just like eating other places more not, and they're okay with it.
But doods...I discovered a great power yesterday. If the People are concerned because they haven't seen me eating in a while, they will sit on that little red footstool and HOLD MY PLATE WHILE I EAT LOUNGING ON THE NEW PERCH!!! They'll even turn it so I don't have to stretch too far.
Just a little while ago, the Man sat down and held a plate for me. He didn't realize I had just been in my room nomming the food in there (the Woman did but she didn't tell him because why would she?)
Yesterday and the day before were not a super great days for me, but the Woman was not surprised and had even surmised on Tuesday night that I probably wouldn't feel good, at least on Wednesday. Tuesday had been a really good day and I was all over the place, going up and down the stairs to my perch and on and off her lap...but one time getting down from the perch I slipped and that's when she said I'd probably have a bad day on Wednesday.
It's like a roller coaster. If I have a super good day, I pay for it the next. If I have a moderately good day, I'll probably be fine the next day. The problem with my bad days is that I don't want to eat. Anything. Wednesday was a not great day and I nibbled, just enough to keep her happy. Yesterday sucked, so I didn't really eat anything except a few bites of steak.
I'm eating today, which makes them both happy...and spurs them into sitting there, holding the plate, trying to get me to suck down a little bit more.
Posted by Max at 11/06/2020 07:22:00 PM 10 comments: 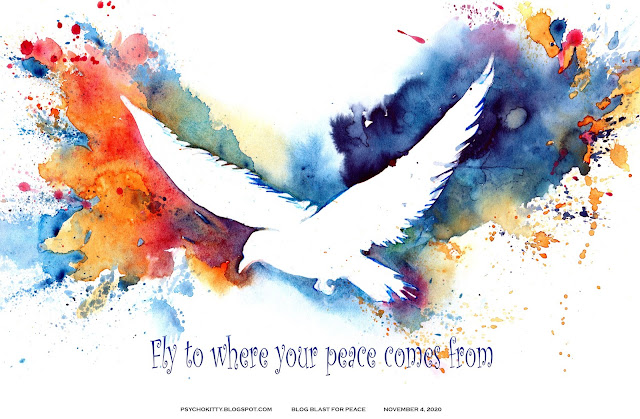