The Woman gave me an early Christmas present, because she just knew I would love it and want to use it and might never leave it. 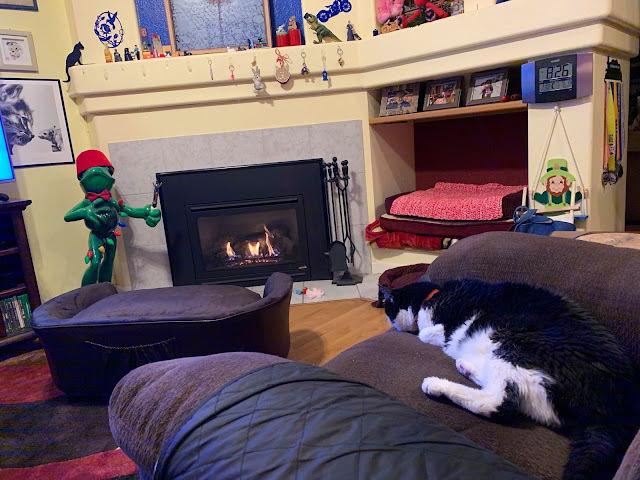 It's a sofa bed of my very own. And it's quite lovely, very nice to look at, but in 2 days I have not gotten on it of my own volition. I was on it for a minute last night, but she put me there with a new nip banana, hoping I would curl up and relax by the fire. 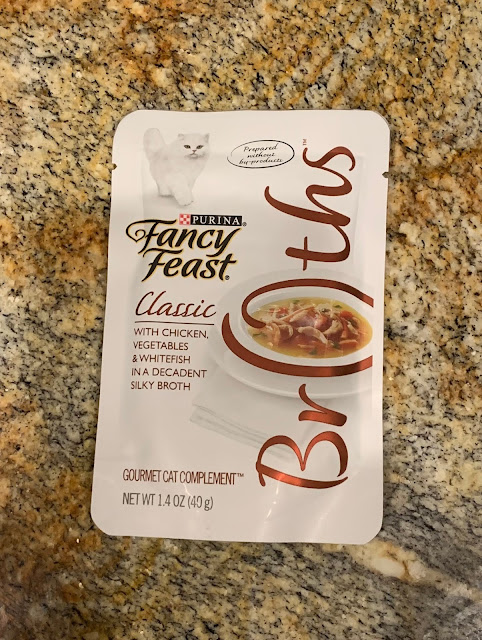 I kinda want to say WHY DID NO ONE EVER TELL ME ABOUT THESE??? but y'all totally told me about these and I did not tell the Woman to run out and buy some. But on a whim she did, and tonight when I didn't eat much of my bedtime snack, she opened one and OH HOLY TACOCAT this stuff is THE CHIT! I licked that bowl clean and wanted more, but she said "maybe tomorrow" so I lowered myself to her level and ate more of the snack food (which was perfectly acceptable but I wasn't in the mood for it at first.)

Do yourself a favor and get some. AND I'M NOT GETTING PAID TO SAY THAT! But get some, especially if you're a little off your feed. It might make you want to scarf it down, which totally makes the people happy.
Posted by Max at 11/22/2019 09:36:00 PM 10 comments:

After I had breakfast this morning--of which I ate half--the Woman remarked that I hadn't had a really good food day in several days.

That's how they refer to days when I eat a lot. Good food days.

Now, bear in mind, I get cans opened for me 5-6 times a day. Sometimes I'm just not hungry, but I asked for food, so the can got opened...a bite or two was all I wanted. And she gets that, and says it's okay.

But when I only nibble at everything for a couple days, she thinks I'm not getting enough.

Since I didn't Hoover my breakfast down, she opened another can 2 hours later, and I took 2 or 3 polite bites, then walked away. She shrugged, gathered her stuff, and went off to work at Starbucks for a while. I went to take a nap.

At lunchtime, I was hungrier, so I ate a little more than half.

She was happy with that, and then set about making her own lunch. I was in the front room lounging on my seat by the front door, and when she sat down in the living room, I caught a whiff.

So I casually strolled into the living room and jumped up on the arm of her chair, and politely asked for a bite. She equally politely said I would get a bite when she was done. So, still polite, I got closer and informed her that I needed that ham more than she did, and I would really like some right now.

Now, from where I was, I could see that she had already torn a few bites off of her piece. She knew she was going to give me some. And I reasoned that since she was aware of this and had wanted me to eat more earlier, she would understand if I did not wait politely any longer.

I shoved my face to her plate and scarfed down all the little bites she had set aside.

She did not yell.

Instead, she sighed, tore more off, and set the plate on the end table to make it easier for me to eat, shoving the lone small bite she had left in her mouth.

I don't begrudge her that.

But...she was happy that I ate.

But today he bypassed the Man and went straight to the Woman and stretched out on her lap. She was surprised, but gave him some head and chin skritches.

And then he farted.

After that, he got up and went over to the Man, where he assumed his regular position.