Yes, he really did get that box for his birthday...

Buddah loves boxes. I mean, I like boxes, but he LOVES boxes. For several years, before the people had the kitchen remodeled, he had a special shoe box on the counter. It was set there for "a few minutes" which turned into a few years, because he claimed it 6.27 seconds after it was set down, and the people didn't have the heart to take it away from him. It became his safe place, the box to which he ran when he was upset or nervous.

When it fell apart, the Man ordered a new pair of the same shoes to make sure that the box would be the same, and it went right onto the same spot. If Buddah noticed the swap, he didn't care; he had his box in his safe place.

When the kitchen as re-done though, the box was put away. They wanted to see if he would be okay without it; if he'd been upset, they would have put it back, but with everything being so new and needing exploring, he didn't seem to care.

Still...every now and then they bring a bog box home, and toss it onto the floor for him. He gets to keep it for 3-4 weeks, or until I pee in it, whichever comes first. When it occurred to them that it had been a long time since he'd had a new one, they went to Costco, because Costco has the best boxes. And that was his birthday present...there's really nothing better they could have given him.

He spends a good part of the day in it, either sleeping or playing with my nip taco, and I have not yet peed in it (I peed in the Man's closet, though. And on some towels on the bathroom floor.)

In other news...the third book in The Wick Chronicles is with the editor now. She's going to read it over the weekend and then send notes; hopefully she won't have too many things to say, so that we can get to the next part. There's already some concept artwork for the cover (and if you read my Ask Max Monday column at Mousebreath, you've seen it) and the trim size will be the same as the other two books. We has an excited, because this one is a fun romp.

And if you haven't read the first book yet, stay tuned...the Kindle version will probably go on sale when this one hits Amazon.

The One That's Partly About Buddah 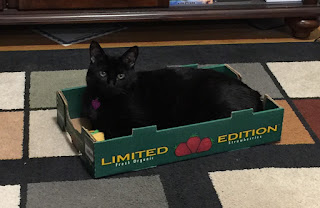 This is what Buddah got for his birthday. A box. And really, it was the perfect present...he plays in it every day and has even taken a few naps in it. It's not too big and it's not too small, and it gives me something to pee on if he gets me mad enough.

Don't look at me like that. If I do it, he totally deserves it. 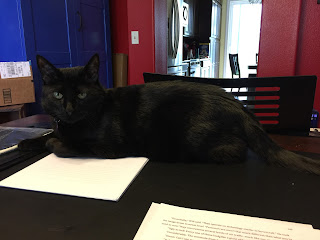 He's also been trying to help with the new book. Mostly, he just holds papers down, but it's proving to be an important job because the people have had the front and back doors open, and the wind blows them all over the place.

The first draft is done and we're well into the edits and re-writes. I really want to get it mostly done before the middle of April, because Doctor Who starts in April, and once it does I'm going to watch it over and over every week, which might cut into my work time.

Hey. I'm almost 16. I think I should get to take 3 months to power-watch the Doctor if I want. I mean, who knows how many more seasons I'll be around for ? (The Woman say ALL OF THEM because she thinks I'm that stubborn.)

The Woman will be distracted by it, too. She was a little bit sick for a couple weeks and one afternoon when she was curled up in bed and I was takign care of her she said, "I can't croak now, Big Guy. I'll miss Doctor Who!" Then I called her a drama queen and she got all better, but she has a point. We need to be extra careful to be sure we're around for this season since it's the 12th Doctor's last one (Ohhhh...and that really upsets her because she totally wants him to stick around for like 20 more seasons. I swear, she would pay a thousand bucks to sit in a room with 500 other people to listen to him read from the phone book.) 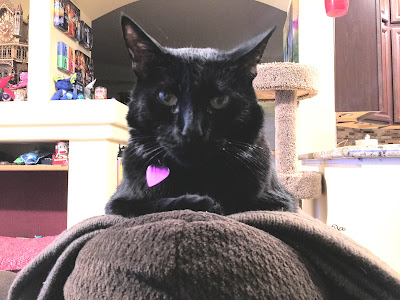 Hard to believe it. I've been putting up with him for twelve years. But, the people seem to like him, even though he's a bitey sort of cat, and even though he's taken to yelling at them when they don't bend to his will.

He hasn't gotten any presents yet, but I'm pretty sure he'll get something tonight, after dinner. I'm 99% sure I saw the Woman hide a new nip banana in a drawer the other day, and birthdays are always a prime day for real live fresh dead things.

The Woman picked a bad time to get sick. My goal was to post every day in February, and she had to go an muck that up. But, she feels better now and says she'll make sure I get to blog more often, even if it's not every day.

Yeah, let's not hold out breaths...

But, we are back to work. The first draft on the third Wick book  is done and is being proofed. We know there are some deep rewrites to be made; the story is awesome and fun but the narrative lags in a few places and I want that tightened up (pretty much the same thing happens with every book, so it's not an indication of suckage, just that we write without editing as we go along.) ((This is the royal "we" since we all know I write my books all by myself.)) (((Shuddup.)))

I did learn something valuable while working this week. If you roll onto the keyboard, you can highlight the entire document, and then if your head hits the touch-screen while you're trying to get up, you can delete the whole thing. FOR REALZ.

I almost had a panic attack when the Woman said, "Wonderful, furball, you just erased your entire book." But then she closed it without saving and opened it back up from the file in the cloud, and we only lost like 3 typo corrections.