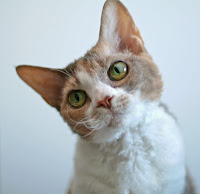 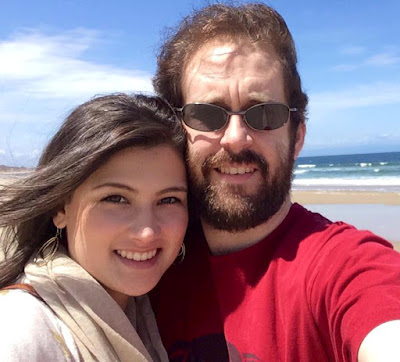 This is him with his Much Better Half...you get this instead of a picture of just him because 1) they're like ONE entity now and 2) she's pretty and I like seeing pictures of her.

I hope he's having a most awesome day. I know he got a bunch of cupcakes, so that's a good start.

The last couple weeks have been pretty busy. We got the finishing touches done on the 9th Wick book, The King of Saint Francis, and set up a new site for The Wick Chronicles. There's no real content yet, but now that we're done with this book and are waiting for the proof to be sent, we'll work even more on it.

You're gonna get chances to get digital versions of my books for free, you never know when. And we're jumping into some short fiction that you'll be able to read or download for free, before those stories go to print.

Right now, it's pretty obvious that the Woman and I are working on the site, but unless it just looks stupid, at some point Wick himself will be the host. Maybe. We're really unsure about that, but it seems kind of funny.

Something else in the works, something that's getting close to being done (like, before the editor sees it, and she'll have Things to Say because OF COURSE SHE DOES)--my interview with Buddah. It turned into a conversation that kind of goes all over the place, buy you can't be too surprised about that if you know Buddah. Frankly, I'm surprised he took breaths so that I could get a word in.

This afternoon, though, we're taking off. The People have some stuff to do that involves moving the wardrobes out of the spare room since I can't get on top anymore, and turning it into Thumper's Room of Pain. Yeah, she thinks she's funny. They're just setting all the dammit machines in there, and then maybe hanging a TV on the wall so she can watch stuff while she rides her bike to nowhere. I can't mock her too much, because she's actually using that stuff. I just wish it were quieter.
Posted by Max at 4/02/2019 04:25:00 PM 6 comments:
Newer Posts Older Posts Home
Subscribe to: Posts (Atom)