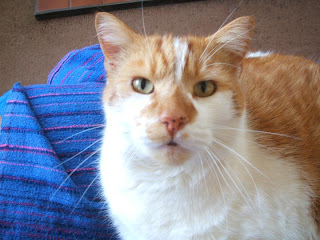 Guys, I was just on Facebook, and got the most awful news.

Eric, longtime blogger along with his brother Flynn, went to the Bridge today. He'd been having some problems the last few days and we all hoped he'd get better, but he had some strokes...and had to go.

I am heartbroken. He and his bro were early bloggers, back when the cat blogosphere was pretty small, and I was stoked when they started blogging. They shared so many pictures with us, and doods...they were pretty tight.

I know their family is really hurting right now; if my heart hurts this much I can only imagine how much they hurt. So please go say a few nice words, if you would.

And Eric, dood, I'll see you on the other side.
What follows is what I posted earlier today:
Doods, a bunch of you guys have asked about borrowing my latest book from Amazon, like you don't want to do that because you're nice as chit and don't want to"cheat" me out of royalties. Go ahead, borrow it! Amazon has this nifty thing where they have a pool of dollars every month, and it gets split pretty evenly between all the writers who have books that can be borrowed. Last month it worked out to a little over $2 per borrow, and it'll be close to that for this month. And that's not too far off what I would get if you bought it. So feel free to borrow it if you have Prime and a Kindle; there's no point in paying for it if you can read it for free legitimately. I still get paid.

Oh, and all my books are DRM free, so even if you don't have a Kindle or a tablet with a Kindle app, you can still buy it at Amazon; just download it to your computer, and you can convert it using Caliber. Then you can sideload it to your preferred e-book device. All I ask of that is that you then don't turn around and give it to a billion people. Or upload it to someplace online. Or other mean chit like that.

That actually happened with the Woman's first book, kinda. That was back when she was with a traditional publisher, and they "accidentally" had the entire book available for download instead of just the first chapter. 25,000 downloads happened. That's a life-changing amount of royalties, presuming full payment for every one...which would never happen in the real world, but it's still the IDEA.

Even after that, she hates DRM-locked books and stuff, because, hey, if you paid for it you should be able to convert it to anything you want. And even share with a few friends. Just not...the entire freaking Internet.
Buddah had a good birthday, I think. He got lots of naps, I let him have the Woman's lap for an evening time snooze--when I would normally be there--and there was real live fresh dead shrimp. Plus, a couple weeks ago he got a new box, and he still thinks it's like the most awesome thing ever, so I played a little with him while he was in it. And hell yes, whapping him on his hollow little head counts as playing. At least he thinks so.
Oh...and y'all know I have an advice column at mousebreath!, right? If you don't read mousebreath! you're missing out for sure. There's a ton of great stuff over there, like Chey and Ichiro's Meezer Meditations, Fred's Mancat Caves, some AWESOME interviews by the Funny Farm Felines, and a whole bunch more. All the really cool cats read it. And then they ask me stuff.

But, one way cats and people could ask me questions was by leaving one for me at Formspring...which is shutting down. There are still two ways to ask me questions: 1) Just leave your question in the comments on my most recent Ask Max Monday column, and I'll answer them the next week, or 2) Message me a question on Facebook. That's probably the best way to ask a question if you want to be anonymous, but make sure it's somehow marked as a question for Ask Max Monday, because people do ask me stuff there that's just for them.

Emailing me doesn't work so well, because SOMEONE keeps forgetting to check my email. And there's like 5,000 things there, and so much gets lost in the spam filter. So asking right there at mousebreath! and on FB are the best bets in getting a question answered.
Last night, there was real live fresh dead chicken. And the people did not offer me any, even though I was very good. Well, the Man didn't eat all of his and he shoved it into teh garbage disposal and walked away, so you can bet I reached my mighty paw into it and grabbed me a piece.

My mistake was that I went right--into the living room--when I should have gone left, into the kitchen. The Woman was all OH NO YOU DON'T YOU GIVE ME THAT YOU FURRY LITTLE BASTARD and she chased me around and grabbed me, and made me spit it out. Cripes, it was just chicken, but she was mumbling about onion and garlic and THAT'S NOT FOR YOU.

Yeah, well, next time run the garbage disposal, and you won't have to chase me and call me names, you puny hairless white thing. Yeah you heard me. PUNY.

Wow Max! That's so cool that so many people are wanting your book and they care about making sure you get enough to eat! Woo Hoo!

PS. Please do something to your human. It's all her fault that the Woman is now playing with 10,000 fonts...

oh oh oh we will check it out at amazon prime - as long as you is getting paid for it!

We are so sad that Eric has gone to the Bridge...we sure will miss him.

Mom can not quit leaking for Eric and his family!

We are seriously gonna miss Eric. He was a MAJOR kitty on the blogs. The wanderin of the fields is not gonna be the same.

Yeah, we just can't get over that he's gone. I mean we're really upset for Flynn to, cause what's he going to do without Eric?

We were very sorry to hear that Eric went to the bridge.

We are also so sad to hear about Eric. We have known him a long time too.This is a sad ,sad day.
Purrs Tillie and Georgia,
Treasure,Tiger,JJ and Julie

We are going to miss Eric so much, he has been a long time friend to us.

we are just heartbroken - we will miss Eric so much and we are worried about Flynn being lonely.

Thank you for your lovely words for our handsome boy. We miss him terribly, but all the love sent out to him and to us are helping us in our grief.
Jackie, Ivor and Flynn.