Don't let the picture fool you... 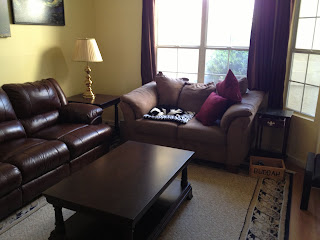 This one from yesterday.

Don't let the lack of clutter and stuff fool you; this is the room no one uses. It's the room where the dammit machines used to live, and they died of neglect, so the people replaced them with furniture.

Wait, I should amend that. No people use this room, thusly it is clutter-free. If you were the person taking this rude picture and you turned around...holy carp, clutter city.

That's the room the people use. The "living" room, where everything they own goes to die. At least I think it's all dead. Hard to tell, what with things stacked on top of each other, smothering in the dust. 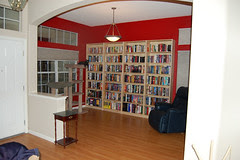 If you look to the right (presuming you're the photographer), you can see where all the books live. The library doesn't look quite that good now. There's another bookcase in front of the window and one of the dammit machines is there, rotting away. And the Younger Human took that chair, so there's a different on there. The Woman doesn't like the room as much as she did, but there's really no place else for the inside walking machine that she doesn't use and thinks about selling, and no place else for the bookcase, though if she can figure that out, she'll totally move them.

But no...the house is usually a mess. Not, like, dirty, but cluttered. Lived in.

I heard the Woman say she's gonna at least vacuum on Sunday because she and the Man and the Younger Human are going to spend his inheritance in Las Vegas starting Monday, so that means the Grandma is coming! And the Grandma rates vacuuming.

Oh. There's an obstacle course in the hallway. I hope she rates putting that crap away. She might hurt herself on it. And if the Grandma gets hurt, who will open cans for me?

You know, our house gets cleaned up like that too, although the Woman is less about clutter than the male.. and he's enough for the whole house, trust me. And he complains about my toys--can you imagine?

The BIG question: does the Grandma give treats?

OMC! If that room was here, there would be stuffs all OVER that table... And the other small table. And that even smaller table.

It must be great to have a clutter-free room just for kitties. We have a kitty room, but, holy crap, there is clutter everywhere.

We thought the exercise machines were to be used in the bedroom as extra hanging room for clothes! MOL!

Andrea and the Celestial Kitties said...

We remember the red book room now that we see the picture Max. We remember when the Woman painted it and the kitty trees got moved in.

Oh Maxx, Thanks everso much for this posting today. That Woman here has one of them walking machines too & right now it's in the HALLWAY of all Cod Forsaken places! She SAYS it's cos in a couple months when The Gurl goes off to finish her schools in Las
Vegas that she will put it in her old room, and do you know where??? Right in front of MY WINDOW where I sit in the morning where the suns come right in just for me to warms my furrs & help me get read for my first series of naps for the day! Can you believe it??? What should I do??

soon to be sunless

Max, our humans got rid of all the dammit machines...well, except for one that got stuck in a closet. Which suits us just fine...more room for us to play THoE!

WE have a very lived in house, too! We do not have a room that no one uses!

OMG Max! I never thought about that--what IF the Grandma *did* get hurt? Why, you'd prolly STARVE, and Buddah too. Maybe your back-up needs a back-up. This is a whole new thing for me to worry about when the Human leaves the neighbors in charge of me. But at least there's two of them, so if hyenas ate one, the other one could still open cans for me.

Our house looks lived in and not as neat since Grampie isn't here to fall over things anymore! We prefer the lived in look.

Bwaa! Haa! Haa! Yous should see the mess our house is! If it was not for the clone tool in Photoshop, Mommy would never hever show pictures of us in our living room. Has yous ever seen Peanuts PigPen? THAT is our house!
Kisses
Nellie