The Incredible Shrinking Me

A couple of years ago, I sat on the scale in the bathroom while the Woman was brushing her teeth. Big mistake. She looked down and saw how much I weighed, turned her buzzing toothbrush off, and said that 18.5 pounds was too much.

Now, she didn't throw the "D" word at me, but said that "we" needed to change how I ate. And you know what? There was no "we" in it at all. SHE changed the way I ate. There were far fewer crunchy treats, though I got dead delicious things more often. She still put dry food out for between-meal nibbling, but it was a low glycemic food, which I only sort-of liked, so of course I didn't eat much of it.

The goal, she said, was for me to lose weight slowly. And about 5-6 months later, when I got weighed at the stabby place during my checkup, I was just under 18 pounds. That seemed to make her very happy, and the stabby guy wasn't unhappy, so she decided to just keep doing hat she was doing.

Now, I have to admit, I never felt really hungry. She changed the brand of food I got most of the time but didn't totally stop with the one I did, because that would be mean and I was doing really well on it. My weight slowly started coming off, and last June I was at 16.5 pounds. Still overweight, but she thought that for a big boy, it was decent, and said we'd try to hold me at that weight.

I started asking for more food; I wasn't eating the dry food at all, and I dipped a little under 16.5, so she started giving me a tablespoon more here and there, and my weight loss was still slow so she thought that maybe I was just reaching an optimum and it would stop with an extra meal or two.

It kinda became an obsession. And I'm loathe to admit it, but now I'm trained to sit on the scale nicely 3-4 times a week. If I don't, she won't open the bathroom door. 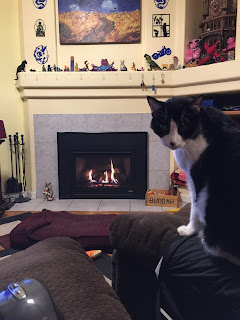 Then just before the 3 Day Boobie Walk, she realized I was eating 5 full meals a day, sometimes 6, and my weight dropped a little more.

She kept watching. I wasn't drinking more than usual, I wasn't peeing more than usual, and my litter box didn't smell sweet. In January when they went to Disneyland, I was 14.5 pounds. They were gone for 2 days, and I was under 14 when they got home.  The question then was, did he not eat much because of the stress of us being gone (the answer was yes) or is more going on (the answer is yes.)

She got my weight back up to 14.5 without much effort. Still, she wanted to know what was going on, so she had the Man make my annual appointment a few months early...and we all know what happened there.

I stabbed her right in the neck.

There was a lot of talking at the appointment: he's always hungry, doesn't seem thirstier than usual, the litter box isn't soaked and doesn't smell funny, he's reasonably active for an almost 17 year old cat, he likes attention a lot, hates Buddah, and Buddah seems to be picking on him more... it went on for a while, and I was stuck there just wanting to go home. The Woman's fear was that I was either diabetic or borderline, and knowing how easily I stress out, that could become a Very Bad Thing indeed.

The stabby guy (who is actually a very nice lady) stole a bunch of my blood and other bodily fluids we won't discuss, and had a tech call this weekend to tell the People that I am not diabetic, but I am hyperthyroid. She didn't want them worrying all weekend, just wanted to let them know, and said the vet would call this week with all the details.

In the grand scheme of things, this is good news. I'm pretty old, and this is common in older cats. It hasn't seemed to have totally affected my kidneys--that's in the high range of normal but still normal--and she's pretty sure we can get it under control with medication.

Now, anyone who's been hanging around the blog from the early days might remember when we got Buddah and I got super sick, and the had pancreatitis. That required being in antibiotics for 10 days, then 14 days off, then on for 10...and it went on for for like a year and a half. I hated it, fought the pills like crazy, and spent a lot of my time absolutely terrified of my people. It was so bad for me that as soon as I had good bloodwork, they told the vet that we were done. No more pills. It had changed my personality and I was scared all the time, and we'd hit the line that crossed quality of life and quantity of life.

That whole thing caused some pretty deep discussions about what to do if I ever got super sick again. Like, cancer or something. And the consensus was that they were going to do what they could to keep me comfortable and happy, but they weren't forcing any treatments on me.

What they wanted for me was quality of life.

And now that whole let's-not-upset-Max thing is flying out the window, because the first treatment the vet wants to try is pills, and they're gonna do it because the pills are tiny and I might be okay with it. If I'm not, there's a version that can be rubbed on my ear.

And yes, the ultimate treatment is to radiate me, but that requires leaving me at a strange place, isolated, for 5 days. And even the stabby lady agrees, at my age and temperament, it would probably kill me.

Worth noting: this stabby place has been super respectful of how stressed I get when I have to go there. They're taking that into account with everything they're doing.

So. That's where I'm at. The pills should come in tomorrow, which means I'll start taking them then. It's a small dose at first, once a day, and will gradually ramp up to see how I tolerate it. I probably won't have to go to the vet myself for a while; once I've been on what they all think is a good dose for 4 weeks, I have to go back for bloodwork, but they'll make sure I'm pretty freaking high and they use Versed, which means I might not even remember it after.

We have a mockup!

Doods. We're in the final stretch with the new book and we got a cover mockup and I so so totally digging it. 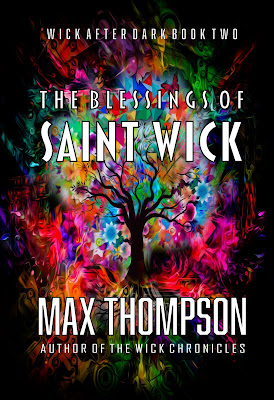 This isn't, like, the final final cover. Things will get tweaked around a bit and if we can get a blurb from someone, that'll be on it. Fonts might change. But everything is in the editor's and beta readers' hands, and once they're done it won't take long before it goes to print. Things are pretty well set up to have it hit the printer a week after the edits are done.

Would have been done already but we sent the editor the next book, too, and she got distracted by it.

Couple people asked me, too, if there were going to be more After Dark books after this one or only Chronicle books...straight up answer, I don't know. We went with After Dark because 1) we got asked a lot about doing a more adult Emperor story and 2) these were stories best told with a more adult theme. But the things we have planned after this don't necessarily need that.

And to be honest, except for some of the language, The Blessings of Saint Wick could have easily been a Chronicles book. To remain true to a couple characters, it went into After Dark, but as stories evolve, so do characters, and the few f-bombs that might occur after this can be covered with Wick subbing "freaking" or even allowing a few to slip in.

Someone else asked what happens to the whole thing a ways down the road, given that I'm almost 17 now. There are literally hundreds and hundreds of pages of notes and the Woman knows where I want this to go. It will all depend on how clearly she can hear my voice...'cause y'all know I'll be complaining right in her ear all the way from the Bridge.

I have no plans to go there any time soon, but just so you know. We've worked it out. 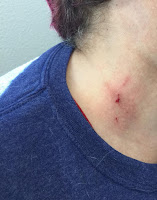 Oh, and I did this to her while we were at the stabby place on Thursday.

I was trying to jump onto her shoulder, because Wick rides on shoulders and why can't I? But apparently a 14 pound cat climbing a person is different than a 6 pound cat, and gravity does things, and the nit thing you know your back claw gets caught in a neck, and everyone is unhappy.

She didn't get mad or anything. Didn't even flinch. So she gets points for that.

THEY TOOK ME OUTSIDE!

AND TO MAKE IT WORSE THEY TOOK ME TO THE STABBY PLACE!

AND THEN MY BLOODS WERE STOLEN AND I'M PRETTY SURE I NEED THEM!!!

AND I WAS MANHANDLED!!!

Not, like, behind his back or anything. But he doesn't blog anymore and his Facebook page gathers dust, but I know people out there like him. And then I got to thinking, why the hell not write about him? Not even a blog post; he's weird enough there's surely enough material to write a book about him.

So...what do you want to know about Buddah Pest? If you could ask him anything, what would you ask? And keep in mind, your question might make it into a book, and this book might be read by kids, so use some judgment, ok.

He's a freak, but he could be a star.

This is something we'll probably start working on in 2-3 weeks, and it might take a while. We have 2 books coming soon, the next Wick After Dark Book, titled The Blessings of Saint Wick, and then a novella in The Wick Chronicles Series, tentatively titled The When of Wick.

Here's the good news about people waiting for the next Chronicles book: it *should* be out less than 3 weeks after The Blessings of Saint Wick. They've both been written, and are in the production phases, but because of spoilers, The When of Wick has to come out after. And don't worry if you skipped the After Dark books--you should be able to hop right back in.

But for now...let's write a book about Buddah! It'll be fun!

...Why yes, I am hogging all these toys. 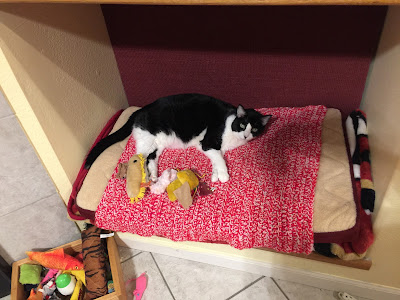