Yep, Santa came and he left me a stocking full of cool stuff AND he wrote me an IOU for some real live fresh dead shrimp. He didn't want to leave it in my stocking because the people run the fire a lot and warm real live fresh dead shrimp can upset a guy's tummy, and it might have gotten overlooked in the fridge, so he's sending me some this weekend. I think either the man in the bloo shorts or the guy in the brown shorts is bringing it. So I have something to look forward to!

But still...I had a lot of fun on Christmas. The Younger Human came over, and he's always fun to see. 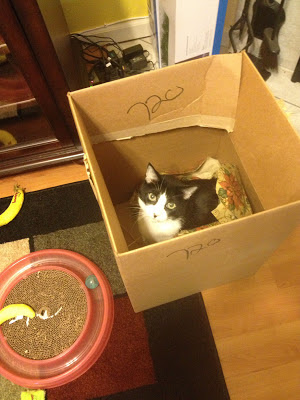 There was a box on the floor, on its side, so I got in to explore...he set it upright! With me in it! I think he thought I was trapped, but I fooled him. When no one was looking, I jumped out. And it's a good thing I did, because the Woman was getting my stocking down, so that I would have something to play with while they opened presents. 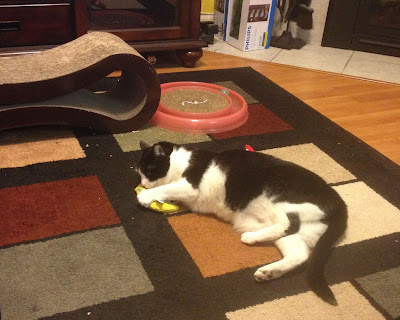 One of the things I got was a new nip banana...Santa must have known I probably wore out my old one. This one is awesome...super powerful nip! I realllllllly enjoyed it...but even though the Woman thought that would keep me occupied, when they started opening their presents to each other, I jumped in her lap so that I could help. 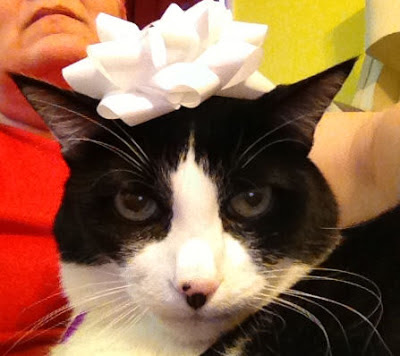 This is what happens when you try to help. You get a ribbon put on your head. But I think I look very handsome here. That'll teach 'em. 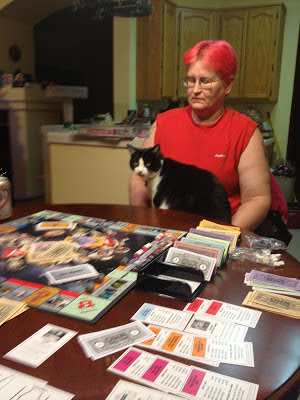 Later on, we watched the new Doctor Who Christmas Special...don't tell anyone, but the Younger Human had it on a USB thingy and we got to watch it HOURS before it aired in the US. Sssshhhh. But it was awesome!

And after that, there was dinner, and then the People played Doctor Who Monopoly. In that picture, I'm consoling the Woman because she lost first and went down in flames. They didn't let me play...I think they were afraid of losing to a cat.

You might notice that Buddah isn't in any of these pictures... HE SLEPT THROUGH IT ALL! He slept through Christmas! But that meant *I* got to play with everything first, and I got to get MY spit on everything first! I even got to rub up on all the toys that Santa brought for that Damned Dog Butters!

I even did this: 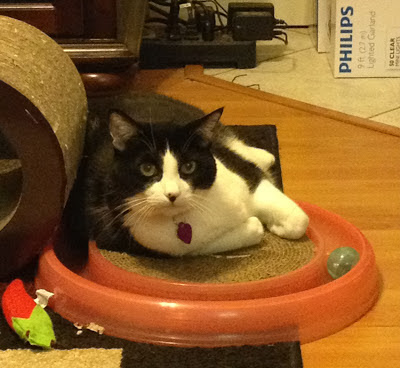 I played with one of Buddah's favorite toys. I played the chit outta that thing, chasing the ball all around. That sucker lights up! I attacked it for a while, then plopped down on it and took a nap.

This was an awesome Christmas. Santa didn't forget me, I mostly had the People to myself, I got to play with everything first AND I still have real live fresh dead shrimp coming!

Oh what a great holiday you all had!

Wow, Max, your Christmas was WAY awesomer than ours!

oh max, you are SO right, life IS so good!

Looks like you cleaned up, Max! But about that bow on your head..you *do* know that will live forever on the internets, right?

You rule! I love it when I get the peeps to myself and the toys first. Have a great Thursday, Max!

Sounds like your Christmas was really great! (Apart from the bow)

You rule, Max! That is the bestis Christmas ever!

Wow, Max! What a great holiday you had...well, 'cept for that bow on the head thing. Buddah doesn't know what he missed!

Max, it looks like you had a great Christmas day.

Gee Max,can't get much more purrfect than that!!! Glad you enjoyed it :)
Purrs Tillie and Georgia,
Tiger,Treasure,JJ and Julie

Max, You hadded the most awesomest Christmas of any Kitty I ever heard about! Wow! Me, I got 'bandoned! What a rip-off. And The Human didn't really buy me any special Krissymouse Toys either cause she says I have too many toys that I have not even played with yet. I think that's a gyp, that's what I think.

We wouldda watched the DR Special, but Grampa gets grumpy about that "silly nonsense".

We know what ya mean about the live dead shrimps. We get ours fresh from the freezer and put in hot water fer a few minnits. TBT likes HIS cookin real fast . Well, as long as we get OURS we dont care how he ruins his.

I actually think you rocked the bow.
My Momlady must have been reallllllly bad because Santa brought her flu!
~ Vicat

lol! Remember max Bow (ties) are cool! We enjoyed the Doctor Who Christmas special as well. I had no idea that there was a DoctorWwho Monopoly game! I may have to get that so That Woman and The Girl would have something to do other than stalking me!. Glad you got to play with all the toys and have your humans all to yourself.

You had an awesome Christmouse! Just like the olden days before Buddah came to live there!

Just to let you know. We have headbonked and purred on mum to send thanks. She says such a simple gesture to show support. JUST DO IT.

Lots of other kitties were getting their mum's to do the same. Sending good thoughts, always.