Do you see this? Do you?

Tonight the Woman wrapped a couple more presents and stuck them under the tree. 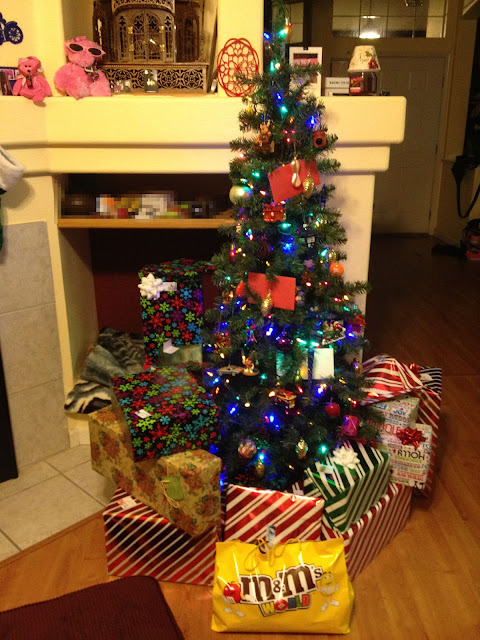 I have looked more than once, and doods, there's not a freaking thing under that tree for me. Nothing smells like a Max present, my name isn't on anything...nada.

I've been good this year, too.

Worse, I didn't ask Santa for anything because this has been a hard year for others and I figured it would be better if he just focused on them, because, you know, I have people who can get me stuff.

There's nothing under there for Buddah, either. He knows it, too, so he keeps trying to gnaw the ribbon off one the Woman's friend sent her, and if he succeeds he's keeping it. That seems fair.

At least it's not like last year when there was a giant bag for that Damned Dog Butters. I don't see anything with his name, either.

Looks better than our house, we don't even have a tree!

You had presents under your tree for a *dog???*. Wow. It must have been horrible for you last year! I bet she just hid them all. Better break out the torches and start the search. If you don't have Amy luck I suggest starting the interrogations. Do you hAve any pitchforks?

Yeah, we don't have a tree either. I don't know what the deal will be with our presents... we had better get some, I am just saying!

Yer prezzies are comin from Sandy Claws the 24th. No he's not the 24th Sandy... The Date!

We have a couple of trees on the first floor here. But mommy gaved her real fake tree away so someone else could have a tree who needed one (hopefully a place with kids).
I've never seen so many pressies. You better start searching the place for yours! Betcha the mommy is hiding yours!
I'll keep my paws crossed for you!
Quinn

Maybe the Woman is saving your packages for later. The mom won't even put presents under our tree because no matter who they are for, we tear into them. And make a mess.

Maybe Santa really *is* coming down your chimney on Catmas Eve! I bet that's it.

That stack of presents is slowly dwarfing the tree!

I think you have gifts hidden away so that you won't be tempted to open them too early.

Andrea and the Celestial Kitties said...

Well.. Santa hasnt been around yet! Maybe you just gotta wait?

May be they have your present hidden so you won't peek!

Oh, no! The secret is you ask for everything and hope for something. It probably wasn't on your list, but ... you know, it's the thought that counts, THEY say.

Course, we didn't ask for anything either and there isn't even a tree to complain about not having a gift under. And our door wreath is still in the closet, so how will Santa find us?

BratCat and Rags have assasinated 2 trees this year, dood! Just think what could happen if we put their gifts under there!!
*shudder*
~Vicat

We agree with the others...the presents will be there when the just before the other gifts are unwrapped.
Budda would totally destroy anything under there.
We hope DDB is not making the scene this year!

Max, I think you have trained your people letter than this. They know what consequences you can mete out if the Christmas offerings are inadequate. There.Will.Be.Presents, Pal. I'd (almost) bet one of my lives on it.

We are sure something will show up for the two of you.

There's nothing under our tree for me yet either. And that makes me sad for both of us.

In short[url=http://patriotsofficialshop.com/]Red Rob Gronkowski Jersey[/url]
you can find several jerseys that players will wear only periodically" [Can Reinforcing the above sentiments the 1983 Code of Canon Law[url=http://ravensofficialnflshop.com/]Ravens Torrey Smith Jersey[/url]
changed the term 'stipend' of the 1917 Code to 'offering' for the money given to a priest to celebrate Eucharist
"According to Goodell[url=http://officialnflpackers.com/]Aaron Rodgers Jersey[/url]
if your players get their way[url=http://giantsofficialjersey.com/]Eli Manning Jersey[/url]
"the National football league would be instructed to operate in the dramatically distinct way This is simply working backwards from the manifested to the manifesting thought In this verse[url=http://officialnflfalconsstore.com/]Roddy White Elite Jersey[/url]
it says that people will work all day long in order to get just enough food to get them through for the day