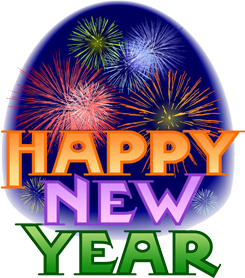 It's been a heckuva year. We've made a lot of new kitty friends this year, but we've also lost a lot, and that's kid of sad to think about. I really do miss them, and I hope they're having a blast up there at the Bridge while they wait for their people. They're probably playing with each other, tons of games of Thundering Herd of Elephants, and I hope they've found where all the lickable Cheetos are so that when I get there they can show me.

I had a good year. We got our Family Forever Home...I mean, Buddah and I already had our forever people, but the People finally bought a house so I never had to go through the M-word again. And that would have been enough for the year.

I got to try out lots of new things. People just emailed me and asked me to try them, and hey! I'll try new free things! I discovered some good food and good toys, and even shared them with Buddah.

A few weeks ago I got to try Nutra crunchy food and it was awesome, but the People prefer to give us Stinky Goodness, so the Woman went and got some cans of it. We tried it before but Buddah was really picky and wouldn't eat it all. But now he loves it so the Woman is feeding us just that now. And you know what?

I'm a lot more active. One night the Woman got up to get something to drink in the middle of the night and I stalked her and tried to get her to play with me. I'm also really really soft now...she says my fur is so nice that she just has to pet me.

So I'm getting really good food, even though it costs more, because I'm worth it.

There was lots of real live fresh dead shrimp this year, and this really cool guy named Denny keeps sending home some chicken for me.

The new house has a totally rad fire thingy that blows hot air, and lately the Woman has turned it on for me every day, even when she's not cold.

I got to say "boobies" a lot this year. Heh.

I hope it's spiffy for you guys, too.

Happy new year to you all Max!

Happy New Year dudes!! May it be our best one yet.

Isn't it great how good foods can re-energize you!? Happy New Year to you, buddy!

That sounds like an excellent year. Of course you are worth it Max! Sheesh. As if there was a question...

we are looking forward to visiting you in the new year!

Wishing to all of you Happy New Year!

Sounds like you had a good year. We hope this one is even better. Our mum is cutting out our crunchies this year as we are getting older. Instead of having crunchies in the morning and Stinky Goodness at night, we will get SG mornings and evenings with a small amount of crunchies we can pick at through the day. Eric will be mad though cuz he loves the crunchies.
Flynn

Max, Is it "Twenty-Ten" or "Two-thousand Ten"? My Womun said you would know for sure.

Logically, it should be twenty-ten, because, you know, it was never one-thousand-nine-hundred-ninety-nine...it was nineteen-ninety-nine. Thusly does it follow that for clarity and grammar's sake that the 2000's should be stated as "twenty-whatever." (2009 should have been stated as "twenty-aught-nine" but that sounded kinda prissy.)

However...whatever rolls off the tongue works. People and kitties will know what you mean if you say two-thousand-ten. And anyone who gets their panties in a wad over it should be given a good, hard wedgy.

Thanks, Max. You're a very good "Answer Cat" -- and you can use this as a recommendation in case anybody ever wants to hire you for that.

That was me of course, up there ^ ^. The Womun who takes my dictation forgot to sign my name. No bonus for her.

(The rest of us Furry Bambinos wish you a Happy New Year!)

Happy New Year Max & Family!
You had a very busy year and we've loved sharing it with you!

Happy New Year to you Max...and Buddah...and your people. We hope 2010 brings you lots of happiness!!

Happy New Year to you and your family Max,

It was a very good year. We are wishing you the best in life for 2010.

Happy new year to you and Buddah, and the Woman and the Man. 2009 was pretty good to you!