Doods! I'm sorry, I didn't mean to worry you. I was a little sick the one day and felt a lot better, but I haven't been eating the way I normally do, which has caused some concern in Casa de Psychokitty. After some deliberation, the people think they have bored me to tears practically with the variety of Stinky Goodness I've been getting. I walked away after only eating half my Tender Beefy Feast this morning, yet funny enough, I wolfed down the Elegant Medley Fancy Feast they offered later.

This afternoon... there was a box. The man in the brown truck brought it a few days ago, but in the Christmas shopping and wrapping of stuff it got shoved to the side. But today, the Woman put it on the floor and said, "It's for you, guys!" 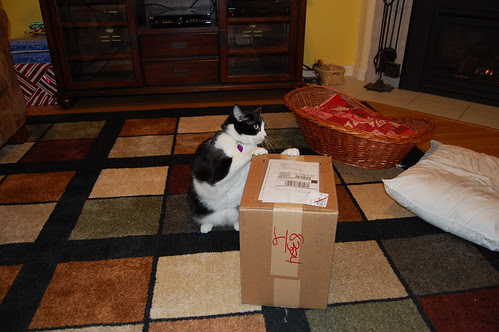 I could not get it open, and I tried hard...
And you know what? Inside that box was another box...and it MEOWED at us! 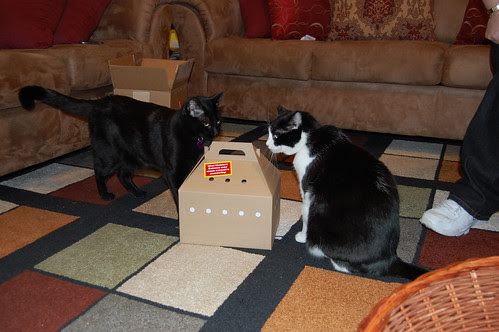 Be verrrry careful...
When the box was all the way open, I could not believe what I was seeing! 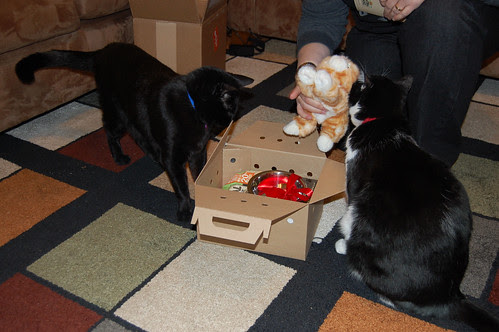 Seriously? Another cat?
I was so focused on the idea that there was another cat that I didn't look harder, but Buddah was all, "Dood! There's FOOD in here! That kitty brought us OFFERINGS!!!" And I figure if a kitty is coming in here, bringing offerings is a good idea. 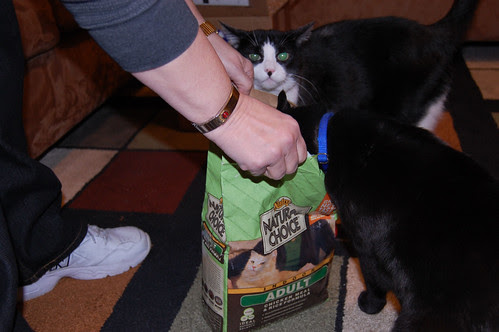 Max, dood, look!
Now, I've been walking away from food but I sure as heck didn't walk away from this. A very nice lady at Nutro sent it to us to try, and I liked it a lot. I've had Nutro Stinky Goodness before and liked it, but I think this is the first time I've had their crunchy food, and it was wicked good. 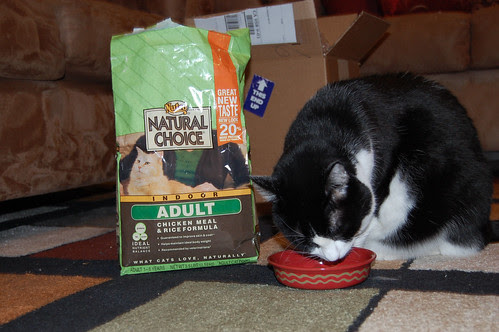 Yep, it meets with my approval...
Since I'm turning my nose up at my regular food, the Woman thinks this was perfect timing, and she's going to see if I keep on liking it as much as I did today. Buddah loves crunchy food more than he loves Stinky Goodness, so it's like SCORE! for him.

I'll let you guys know how well I keep liking it. It's supposed to be high quality noms, so I have high expectations.

We just heard that you're not feeling well.

Big hugs and of lot of purrs to you.

I heard you weren't feeling well and wanted to drop by and send get well purrs! I've eaten Nutro stinky goodness for a long time and I love it. I hope you like this food and it does your tummy good.

I am sorry to hear you haven't been feeling good, I've got my rumble-purr on and sending you bunches of healing purrs. Get all well my friend!!!

I'm glad you're feeling better!
Getting presents is fun! I haven't gotten any yet, but the rats here did!
What else was in the box? It looks like more than just the food and kitty!

hehehehe, I see you know have a new GINGER brofu! Enjoy your new food.

You gotta change things up!

Max! We're so glad you're feeling better and the problem may be that you were just a little bored with the feed...we hope those new noms continue to do the trick!

I think maybe the People need to feed you steak and shrimp.

Neato gifts! For a moment there I thought you guys really got another kid!

I am glad you are feeling better. I think a bit of steak would settle that appetite thing right on down...

I am glad you are feeling better. I think a bit of steak would settle that appetite thing right on down...

We heerd you didn't feel so good, so we wanted to stop by and say hello, and wish you well. We hopes you feels better.

Yur furriends, at Talk With The Paws.

We really hope you are feeling better furry soon, Max! Sending you lots of healing vibes!

What a wonderful box of fun!

We're so glad you're better. And presents! Yea!!!

We're glad you're feeling better, Max, and hope the new foods help out. If not, then more chicken from Denny and more real live fresh dead shrimp might do the trick... ;)

Purrs and hugs,
The Kitty Krew

I'm glad to see you are nomming real good there!

Glad you are feeling better! That looks like yummy food.

Heh Heh. Mom brought home a sample pack of Natural Balance and we loved it!! Then when she brought home the 6 pound bag we refused to eat it!!!
She's going to give it to the neighbor cats.

Max, Like the image at the top of the blog of you and Buddah investigating Christmas presents. I am glad to hear that you are feeling better and have scored some yummy food.

We gots one of dem nifty packages too! Dem kitty meows are real entertaining...fur dad. He haf been hiding dem in weerd places and making mom set dem off and den we all come running to see what happened to da kitties! Den dad stands der and laffs. Even mom is starting to get a little ticked at him. Oh, but da food is purrty good so we been eating it and da little ginger cat haf been claimed, by of all furries, da little woofie, Squirt.

You've got us licking our chops!

We have some of that Natural stuff. It gets mixed in wif our regular Meow Mix. Makes the Meow Mix even better.

But fer Stinky Goodness ya GOTTA get yer Beins to get some Evo DUCK! It is ta DIE for...

Hmmmmm, have yoo been eating any of dat new rug??? If yoo barf any of dat Nutured food an it stains anyfing den DO NOT EAT anymore of it! Sorry, owr mom is kinda like da dry food police.
Real protein rules. Go fur da steak.

Now that is just teasing Max! I really was beginning to wonder if your person brought you home another little..and real playmate!
But a giant gift box is cool too.

We're glad you're feeling better, we look forward to reading more of your stories!

oh, wow! we's mighty glad to hear yer barfiness is gone!! great big SCORE on that nutro stuff--we'll be innerested to know how it suits you.