All right, dooods, Christmas is over and I have to admit that I am relieved to have it behind me. Do you know what happened? Do you? I'll tell you what happened!

The day started out really nice. We got up and the Woman gave us Stinky Goodness, and when we were done eating we went into the living room and there were our stockings! All filled up! Santa came and he left a lot. But...the Man had to work all the night before and he was sleeping so we weren't allowed to look into them until he was up. That was ok, I could live with that.

But then. THEN... the Younger Human came over, and he brought that damned dog Butters. Now, I didn't realize this at first because I was taking a nap, but when I woke up I heard the Man's voice and went out to the living room to see if we got to have Christmas yet...and there he was. Butters. Oh holy crap. So I went back to the bedroom and hid under the bed.

After a while I smelled food cooking, and it was awesome, something I don't think I've smelled in a long time. Well, surely if the Woman was cooking something that good Butters was gone and I could come out for Christmas dinner. I wandered into the kitchen and it smelled so good.

But then I heard him.

And then I saw him.

Worse, he saw me, and you know what he did? HE CHASED ME! I had to scramble to get out of there and jump over the hallway gate, and I hit my legs on it pretty hard, hard enough the man came to make sure I was all right. He gave me treats, but that doesn't make up for the fact that while they had dinner that damned dog was RIGHT THERE getting bites that shoud have been mine.

I spent most of Christmas hiding under the bed. That really sucked.

Later on we got to see what Santa brought us. 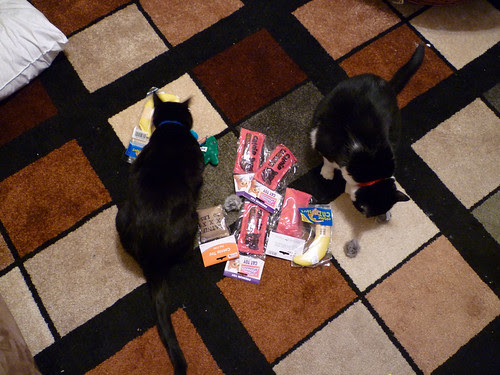 See/ He was awesome to us! The Woman royally failed at finding my cat nip candy bars but he brought me LOTS of them. They're pink, not red, but that's close enough!

We also each got a Nip Banana! 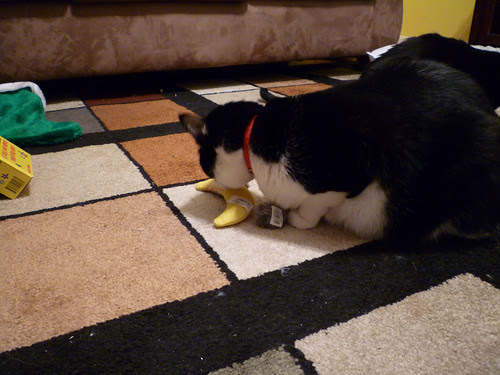 And the People got us a Fling-Ama-String! 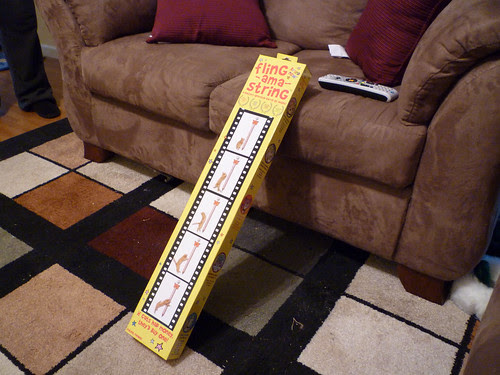 And look what the Grandma gave us! 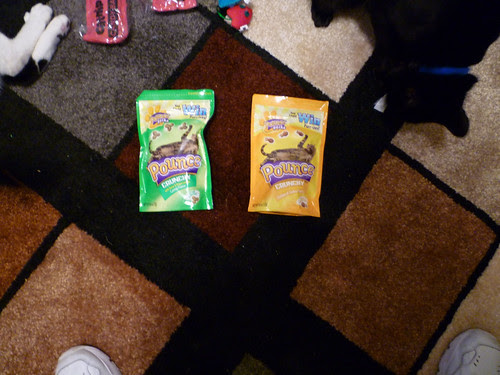 In spite of that damned dog Butters we had a decent Christmas...it was nice before he got here and nice after he left. I don't know why but the people really like having that woofy around and they laugh at the stuff he does like he's really funny.

Oh, go to Buddah's blog and see what the Man made for him! Even I have to admit it's really cool.

Max, if you chase first the dog will run. I know. I have chased them. I love it! It's a powerful feeling.

That is some pretty awesome stuff!!! You need to give that doggie a good swat on the nose.

I'd be giving Butters a whap on the nose. That's some seriously good stuff you got for Christmas!

That dawg needs to learn that you are the boss in your house. You need to get in lots of whapping practice before he comes again.

Awww that is rotten. Woofies! Ewww!! But at least the rest of the day turned out well.

So glad Christmas turned out well even with the woofie in the house.

Well, at least it was mostly a good day for you!

All kinds of neat things! Ginger sends her love & wants to come play with your goodies!

Looks like you had a good Christmouse, with the excetpion of the woofie hanging around.

Oh no the woofie chased you, thats awful. The beans realy are strange hinks arn't they. At leadt you had a good christmas anyway, and you got lots of brilliant goodies. Hugs GJ xx

Wait, the WOOFIE got ta stay by the Chrissymouse Dinner an get pieces while YOU were forced ta hide? That is JUST NOT RIGHT! We're glad ya got lotsa good stuff from Santa, though...

Santa really rocks that he brought you Nip Candy bars! WE looked every where to see if we could find some for you! Woolfies are no fun,, unless you are raised together!

That whole dog thing is totally wrong. Really, he should have been in the back yard or something! Well, it sure looks like Santa treated you well at least!

Next time Butters comes over, they should put him in a closet! It's your house. If they don't do that, then give him a good whap on the nose.

Nice goodies you got, though.

It is very interesting for me to read the post. Thanks for it. I like such topics and anything that is connected to this matter. I would like to read a bit more soon.

Sounds like you had a pretty good Christmas after all with some yummy treats and some fun things to play with. What are Nip Bananas? Sounds like something my kitty would really enjoy.

Well Max, you did get a 'nip 'nana so that almost makes up for being chased by a dawg.

Face it Max,beans are weird and totally nuts!! We had a great Christmas going,then,THEN, Mom leaves us ALL day!!! Then,THEN she sent a sitter and stayed away 2 days!!!!
How can they not see that WE are the priority at Christmas?? It's all about the cats...right?? Sheesh!!!!
We're glad you had a great Christmas !!!
Purrs Mickey, Georgia & Tillie

PeeEss: We saw your comments at Monty Q's place, so we had to reply in kind,heehee(hence the use of 'then')
Purrs Mickey

Oh noes, a DAWG on Chrissie Mouse Day, chasing you?!? Not good, but we're glad you eventually had a good day with lots of nice prezzies!

that's just wrong. it's YOUR house and HE should haf to stay unner the bed.

Great present you got there!
Wonderful~!

Hi ya, Max...that really sux about Butters being there and ruining your Christmas...well, sort of...you did get some awesome stuff from Santa!! Those nip nanners are the best! We're on our second one because Ernie likes to chew holes in them and then all the stuff falls out...he's not very bright sometimes....

It looks like you had a pretty good celebration, in spite of that damned dog! Hee Hee, that's the first time we've cursed. We may be in some trouble with our Mom...

I am really sorry that Butters got your Christmas dinner bites and chased you. Next time you should get the drop on him and try chasing him around. Or give him a good whap. I am glad that Santa found your nip candy bars and that you got a nip banana.